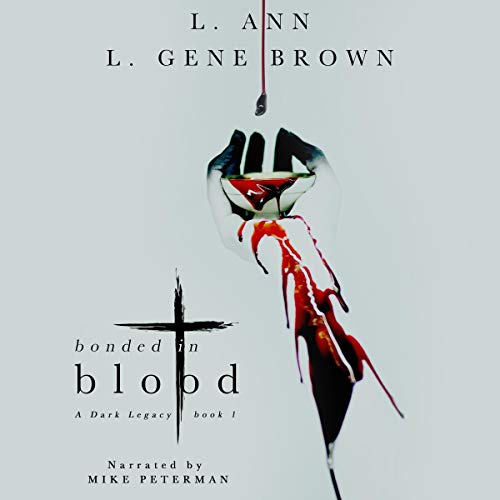 Taz I’Ane - arrogant, irreverent, womanising - Heir Apparent to the House of Nikaris, the largest and most powerful house in the Vampire Nation.

Morganna Satori, top of the chain of the world’s deadliest and most feared assassins - as lethal as she is beautiful.

Two people who couldn’t be more opposite. And whose only connection to one-another is a torrid one night’s stand in Las Vegas, six months past.

Now they have been thrown together to investigate a string of grisly murders, perpetrated by what appears to be a homicidal mad man in control of a savage army of children.

The question is not whether or not they can survive their seemingly impossible assignment. But whether they will survive each other.

What listeners say about Bonded In Blood (An Adult Vampire Romance)

I enjoyed this book. I have listed to other books by this author/narrator combo. It takes a little to get into the narrator. However I really liked this book. The dynamic of the characters is great. Can't wait for the next book to come out.

Bonded in blood was a great read. I liked how the story developed and the characters interacted.
This is really worth a listen just for the fact it has an original take on vampires and the politics within the story are well thought out.
I can’t wait for the second book Blood Carousel to come to audible.
The narrator does a fantastic job reading this book.
I like how he doesn’t make Morgan sound too girly.
His voice is so entertaining to listen to.
Very enjoyable!!!

Great book and characters especially Taz and Anna ( Morgana)
The story line drew me in and kept me wanting to listen so I ended up staying up all night . Looking forward to book 2.

This book is for you if… you do not expect outrageous things from yet another vampire book and are able to draw on the little details that make this book a nice experience.

⤐ Overall.
You can see it right at the bottom: 4 stars to enjoyability. And it's accurate. I really liked this. Bonded in Blood is the perfect company for a night of painting and a light walk around the neighbourhood. Neither original nor exceptional, this narrative still managed to find it’s way to my feelings in this reading slump I’m in right now. I'm not complaining, just immensely thankful.

Many vampire romances are problematic at best, however, L. Ann managed to create main characters that possess proper morals despite their obvious flaws. Both came from interesting backgrounds - the way they grew past their difficulties and towards each other was the biggest source of entertainment for me.

When the paranormal world lives underground and parallel to the human world with barely any intersections, the world-building is as undemanding as can be, which just added to the effortless character of Bonded in Blood. Fighting the evil forces of the underground involves a very stereotypical arch of suspense with plenty of small fighting scenes and sexy intermezzos until the big-battle-slash-rescue-mission functions as the final showdown.
[image error]

⤐ What’s happening.
After the one night stand of their lifetime, neither Taz nor Anna expect to see each others' faces ever again - although it does not keep them from cooking up wild fantasies about an near impossible encounter. It is thus highly unexpected but with great pleasure that Taz finds Anna on his doorstep, even though she might be bleeding and only to discover she's the daughter of one of his most trusted advisors, an uncle of sorts.

What follows is a wild chase to contain the threats to his kingdom. And a search for the aspirations both Taz and Anna have towards their romantic future.
_____________________
writing quality + easy of reading = 3*

Check out the narration to see if this narrator is for you.

I found this book had really good bits and some badly written bits which distracted from the story, which was good.

The narrator did not suit this book in my opinion. Not being able to read but only listen, I dont know whether the problem was the narration or the writing.

overall the story seems okay I just could not get into it with the narrator. It just seems so bland in his voice and blah.

I dont know where this story was going and I never will, because the narrator is terrible This needs to be re-recorded. Based on the little I was able to listened to, I'm not sure this book was going to be good anyway. The dialog is lacking and the story was difficult to follow.

I honestly do not know what is worse, the writing or the narrating. It was hard to tell the storyline from the quotes because of the narrator, but the writing was also so poorly done I can imagine how he would have had a hard time reading it. I couldn't finish it, I tried several times... But I couldn't do it.

Head Spinning to the Point I Gave Up

Let me begin with the fact I listened an audio copy of this book, and the narrator is atrocious. He has a pleasant voice; however he has no idea how to narrate a novel. There are no voice changes with characters, and he hardly changes his tone in dialogue. Even during steamy scenes. Good Lord, listening to Peterman narrate the sex scenes was cringeworthy. He was the worst part.

When it comes down to content, sadly, I have several criticisms. I hate giving up on books, and leaving bad reviews, but this one was a doozie. I tried SO HARD to just get through it, but I just couldn't. I’m a huge fan of vampires, yet the magic was missing from the descriptions of the vampires. The names were far-fetched and grandiose, yet for being so long-lived, they spoke much more modernly than they should have. Their mannerisms (aside from the elders) were just a bit too informal and clashed with their regal names. The plot jumps around so much that it made my head spin. It starts with the army of vampiric children killing people making it seem urgent, but then hit the brakes because you have to stop to explain the setting, characters, and romance between the two main characters, and don’t get back to the action for a long while. There were several times where I had to stop and replay a scene to understand what happened. And Morgan! She fought and killed a vampire child in the very beginning; is injured by it, yet the implication that someone is creating an army of vampire children is beyond her until they get video evidence and review it with the elders much later in the book. A professional assassin, in fact THE most famous assassin in their vampiric world, would have understood the severity of the issue when she encountered the first child, and should have reported it to her elders. It’s groan-worthy. Maybe some of this can be blamed on the monotone robot narrating the story, but there are just too many plot issues for me to wave all of them away. You cannot physically grab a fistful of your partner’s hair, then proceed to pull her shirt off. You don’t shrug out of pants. You can shrug out of shirts, but not pants. I had to stop two hours into the story to start my review because I couldn’t take it anymore and had to record my thoughts before I lost them in the remaining of the story. I’ve taken several breaks in the story and finally reached the point when I just couldn’t take anymore and gave up completely.

For praise, the idea of having a near immortal race similar to a vampire yet bred and raised to be lethal protectors was very intriguing and refreshing. The idea that the main characters’ fathers have plotted to bring the two together to bond without their kids knowing was entertaining. At the time it was introduced, it lightened the mood, and you could just imagine how much fun they had giving the kids a hard time about their blossoming relationship while the kids try to deny anything is going on. It added a lot of needed humor. On the downside the main characters are hardly upset when they find out their fathers set them up, and the story just barrels on. I can’t say this is THE worst vampire novel ever, but it’s up there.

I love vampire novels! This one does not disappoint. As usual read it on kindle first then listened to it on audio. Mike does an excellent job narrating it. Brought Taz and Morgan to life. And as with the other series I found I looked at a few scenes differently thanks to the emotion and narration. Highly recommend this book and it in Audio as well.

I really liked the way the vampires where portrayed that was far from fluffy and friendly! I liked that the characters were far from perfect, they were flawed but in a good way! Action packed and full of mystery! Overall I really enjoyed this title!

At first I struggled to get into this book because the narrator had a bland mechanical voice and there were times when he would nearly run out of air or you could hear him needing to take a deep breath. I almost stopped listening but he ended up finding his stride and before I knew it I was captivated. I enjoyed the characters, the storyline, and the character arcs. There were times when the narrator would slowly become a bit mechanical again and I would zone out, even after making multiple attempts to listen to the same part, but he would recover and I would become interested again. I found myself unwilling to reach the end and when I did reach it I was sad to be done. This world is quite interesting and these characters are extremely flawed but I still rooted for them.

Love, love, loved this. So much action as the characters grow and become closer. I am looking forward to the rest of the series!!

I think it needs a new narrator

if the narrator was more enthusiastic and like the more top narrators then it would have been great. The story was good but because of this I could not get into the story:(

Another amazing story. In this one we meet Morgan and Taz, both heirs of the respective families and houses with matchmaking fathers. Yes, fathers playing matchmaker lol. While we have a bunch of strange murders going on we also have a budding relationship and romance happening much to the delight of the proud fathers. The story is engaging, fast paced and entertaining.
The narrator does a great job. I look forward to more from this writing duo