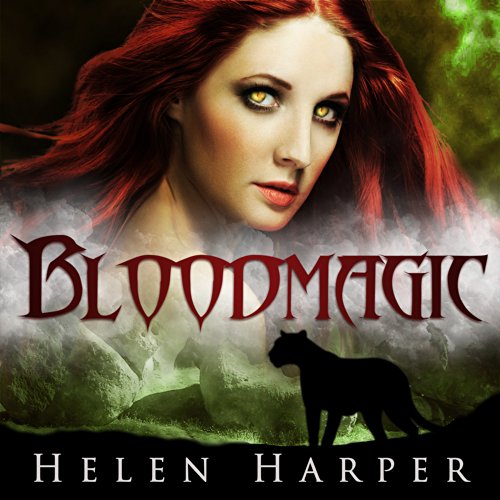 By: Helen Harper
Narrated by: Saskia Maarleveld
Try for £0.00

After escaping the claws of Corrigan, the Lord Alpha of the Brethren, Mack is trying to lead a quiet lonely life in Inverness in rural Scotland, away from anyone who might happen to be a shapeshifter. However, when she lands a job at an old bookstore owned by a mysterious elderly woman who not only has a familiar passion for herbal lore but also seems to know more than she should, Mack ends up caught in a maelstrom between the Ministry of Mages, the Fae and the Brethren. Now she has to decide between staying hidden and facing the music, as well as confronting her real feelings for the green eyed power of Corrigan himself.

What listeners say about Bloodmagic

I really enjoyed this book, and will definitely be getting the next in the series.
Saskia Maarleveld does a good job of narrating, although she does occasionally have a tendency to slip into American, and often pronounces words in the American which is a little annoying considering that all the characters are British and the book is set in Britain. However while it is a little irritating, it doesn't detract too much from the story, and her narration is still good overall.

Great story that sucks you in

Would you consider the audio edition of Bloodmagic to be better than the print version?

I haven't read the books so can't comment on this.

What other book might you compare Bloodmagic to, and why?

The central character Mack reminds me of Elena from the Kelley Armstrong Women of the otherworldly series. Strong, feisty and loyal, but needing to find her own way in the world.

Which character – as performed by Saskia Maarleveld – was your favourite?

Toss up between Mack and Corrigan

Great beginning to a nice series.

Would you listen to Bloodmagic again? Why?

In this book probably Solus(spelling) the Fae. Has a real mischeivous streak
Mack is a bit disappointing so determined that the Bretheren will kill her old pack if they find she isnt a shifter

when Solus transports her to Corrigans bedroom - its hilarious

good follow up but not as good as the first book in the series.

It had so much potential.

The plot doesn't have any real direction. Main characters have unprovoked mood swings from page to page. Secondary characters return as completely different people. Compared to the previous book in this series, NOTHING is explained. Yet not non-key information is repeated and repeated.

It could have been much better written. I have listened to a lot of sci-fi and fantasy genre books and this one does not even come close to any of them.

What was most disappointing about Helen Harper’s story?

I am not sure why the reviews of this book are so good. I bought it based on them. I even went so far as to buy the 2nd one in the series based on the reviews, hoping it would get better. I suppose I shouldn't have expected that much given it was the same author. I have listened to books where I did not want to stop until the last word and then it would leave me longing to find out what happens to the characters. I would be thrilled to find out that the next book in the series was already available and would start listening to it immediately. I became invested in them. In this book, the main character just isn't believable. I think the author wants the reader to believe the main character is so "badass" but the writing just doesn't convince me of that. And after finishing the book, I really don't care what happens next. It was overkill and rather slow. As another reviewer stated, "non-key information is repeated and repeated." Such as, even when it is clear from every other characters;s point of view that Mack's conviction that the Lord Alpha will annihilate her "pack" if he finds out she is "human" is wrong, she still keeps beating it to death. Definitely not a page turner.

Would you listen to another book narrated by Saskia Maarleveld?

The story line could have been really good had it been written differently.

starting to get irritating, dragging out the Corrigan attraction, and sick of “being human” could get the pack killed.

Better than the traumatic first one

Why is Mac so stupid? I hate how she's not bright enough to figure out the most obvious truths (uh hello, Corrugan likes you and oh yeah - everyone has told you just how unlikely it is that he would kill the Cornish pack for harboring a supposed human). Eek the development of her awareness is sloooww. This narrator is what keeps me from giving up on Mac. Lovely voice! I only hope that in the next book Mac wisens up.

Book 2 is still keeping my interest. It is not off the charts Awesome, but still has potential. It really is a good story. Although it does keep my interest I am not sitting on the edge of my seat with excitement about what might happen next. I can put the book on pause and not think about it until I am bored again. But there is progress in the storyline and she received some nice new powers, I just want her to kick more butt!!! :)

So far not bad, I will buy the third book.

Bummer, I had higher hopes for this series.

I was disappointed with this story, the story line was so ho-hum. Not that I hated this story it was just a bit boring and the story line didn't really go anywhere. I knew Mac was a bit immature in the last book, but you would think she would have grown somewhat from her experiences from the last book. She started to annoy me because she didn't have rational feelings. I also didn't always understand the motivations that had Mac doing some of the things she did. I would have like the relationship with Corrigan to have progressed some too, but it really didn't. I don't know if I will continue on with this series. Narrator does a good job.

I love Corrigan, he's so hunky! And I love fiery Mack! Her newfound powers are exciting! I feel sad that she finally works things out and then has to go off and do the mages bidding just when things were getting good.
Saskia Maarleveld is an excellent narrator!

F word is used in extreme

The F word is used to the extreme. the book has a good story line but between her outrageous temper and the F word. I think the author really did a disserves to the book series.

I now have several of Helen’s Series of books. I do love her fantasy. Thank you for your imagination.