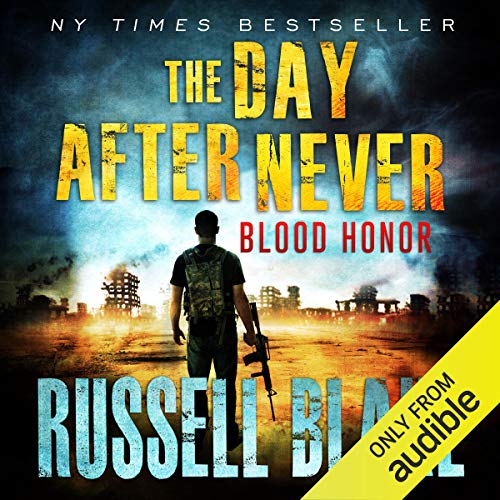 By: Russell Blake
Narrated by: John David Farrell
Try for £0.00

They said it could never happen - that the day would never come.

Five years post-collapse, former Texas Ranger Lucas Shaw is surviving hardscrabble in a kill-or-be-killed wasteland. When an enigmatic young woman enters his life with a desperate plea, Lucas must face impossible odds and battle an adversary who will stop at nothing to destroy them. Lightning-paced and gritty, Blood Honor, the debut novel in The Day after Never trilogy, is a non-stop adrenaline rush set in a chillingly plausible dystopian future.

What listeners say about Blood Honor

This is the first apocalyptic-style book from Russell Blake I have come across. Halfway through this first book of the series I have decided it is an excellent book. The flavor is more western than anything else. Though strange sounding, how much different would it be should a grid-down apocalypse take us back to the 1800's. This also makes more sense since our main character Lucas is a former Texas Ranger. The things that bring me back to current day are the weapons being used. Excellent writing, good characters, with this wonderful western flavor to the story. One of the better stories I have come across in recent weeks. I'm liking this so far. I wish Audible had the next two books.

I have listened to both books in this series and I must say they are probably my favorite of all post apocalyptic novels I've read. It's almost like Clint Eastwood meets mad max. What's different about these stories is the fact that they are not heavy in the bible banging or the preaching to buy silver and gold. But they are heavy on action and story line. I loved that, as I have grown weary of the former. They read like a western but better. I love Lamore, so this was right up my alley. I would strongly urge those of you who love post A novels but are sick of the religious overtones to read it. Patterson bores me half to death. But I suffered through them because I never give up. Now, don't get me wrong, I am religious. I just don't need the nonstop chatter about JC. I crave action and man this is packed with it. The narrator is excellent and brings the story to life. Far far better than some others who have strange intonation and speaking habits. Great range of voices. Just excellent. I am disappointed that I have to wait for book three. But hopefully I will get to hear it soon. Great book to sit out side in a hammock witch a beer, chill, close your eyes and let the story unfold.

An adult novel not rated R

Russell Blake writes adult novels that are comprehensive, interesting, and intriguing. No bad language or sex. It's a new spin on dystopian.

I will listen to the next book in the series

For fans of post apocalyptic novels and series there are some great books available. Unfortunately the first book in The Day After Never series is not one of them. I'm a huge fan of Russell Blake's JET series as well as his Black series, so I decided to try this series. Compared to other modern books of the genre like William Forstchen's After series, Suzanne Collins' Hunger Games series, Veronica Roth's Divergent series, Brett Battles' Project Eden series, etc., etc, this first novel in The Day After Never is worthwhile but weak. This is the first Russell Blake novel I have rated as less than excellent.

Russell Blake consistently selects and stays with superb narrators.like John David Farrell, Ray Porter, Dick Hill, RC Bray, and Braden Wright for his various series. Every one of them is first rate.

I have listened to over 500+ audio books and I will say this story is in my top favorites. The only grip I have is that it's only 7 and half hours long, it leaves you wanting allot more. Is it worth the 7 hours? He'll yes it is. The stories protagonist isn't only surviving but helping a little girl and an apparent hotty which in my book is as good as any reason, he has a good backdrop story and really doesn't want to do it, but because he's a good guy does. It seems simple but it works. I don't give books under 10 to15 hrs a 5 star rating and I know allot of audio book lovers love longer stories like me, however like I said before it's worth it.

Gritty with a good storyline

This was a good addition to the series. Lucas is a character that is more believable than an over the top ex soldier type.
The narrator did a good job but I did not like his voice for Lucas. It was annoying but didn't take away from the story.

Simply the best in the genre!

Would you consider the audio edition of Blood Honor to be better than the print version?

these books are fantastic!
excellent adventures with great writing and narration.
if you like end of the world fiction this is for you.

What made the experience of listening to Blood Honor the most enjoyable?

The narrator did a great job with all the character's voices. It really made the story come alive.

What other book might you compare Blood Honor to and why?

I don't usually read post-apocalyptic fiction, but I've watched Mad Max, and I think The Day After Never - Blood Honor is better than that.

What does John David Farrell bring to the story that you wouldn’t experience if you just read the book?

Sounds great and gives my eyes a break!

If you could rename Blood Honor, what would you call it?

I wouldn't rename it.

I've read all of Russell Blake's books, and I think this is one of his best.

This book is so close to present times. It is awesome to see what happens when civilization declines. I've read this entire series twice and I'm now listening to it. Highly recommend it!