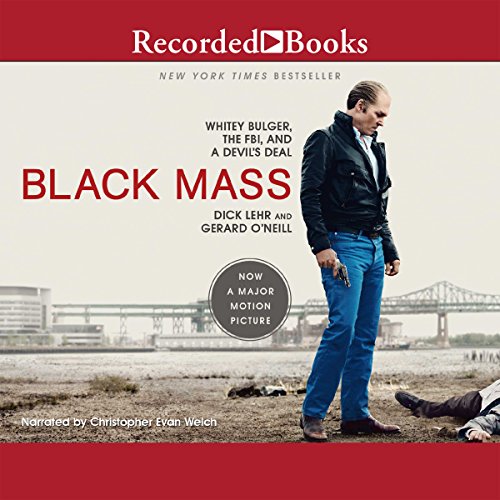 In this gritty New York Times best-seller, the true story of a crooked deal between the FBI and the Irish Mob is exposed. By providing a penetrating look into the mean streets of mid-1970s South Boston, the author shows how two kids from the neighborhood cross paths again years later, ending in the biggest informant scandal in FBI history.

What listeners say about Black Mass

Came to this book after seeing the film black mass. enjoyed the book and would recommend it to anyone who enjoyed the film.

Fantastic account of the winter hill gang . What surprised me the most was how long he got away with it . Worth a look .

Well written and performed. Of all the books out there on Bulger, this is one of the best.

WAY BETTER THAN THE MOVIE!!!!

Great performance! The detail was incredible when compared with the movie. You walk out of the theatre thinking that the F.B.I. were heroes... and then.... you read the book. Bulger was the Devil, and the F.B.I. we're his right hand. it's amazing how bad Hollywood is at creating a movie, that is based off of a book/true story. They have the script, plot, beginning, middle, and end, and still manage to completely destroy the story..

The narrative was incredible, much credit to the authors for sorting through 30 years of events, tens of thousands of court documents, news articles, and interviews into a novel that captures your interest from the first page on. Instead of going the Hollywood route, and forcing their opinion on the story, and recreating the wheel, they took the time and effort to tell the story as it actually happened.

I thought this book was not only captivating, but enjoyable, well thought out, and informative. I am obsessed with crime stories and I loved this book. I will be listening to it again. The authors did a fantastic job!

The damage of the insider threat

What does it look like when a member of the legal community shifts his/her allegiance to a criminal power? I give you John Connoly.

Nearly 30 years of criminal activity in South Boston was actively defended by FBI agents. This book thoroughly examines the history as told by two Boston reporters. Research conducted includes eye-witness reports, grand jury testimony, and FBI records. Some may call this book dry. For me, the insights and realities were delivered in a way that was both exciting and informative.

I read this book as another view of what insider threats can do to a person, an organization, and in this case, an entire community. The FBI reputation was devastated. South Boston's very anatomy was changed forever. The criminal underworld gained unprecedented ground.

Where does Black Mass rank among all the audiobooks you’ve listened to so far?

What about John Rubinstein and Christopher Evan Welch ’s performance did you like?

It was well done and well read. That seems like something all audio books have, but it is NOT.

The story is well told by the authors but the narrator keeps you coming back.

It's amazing and incredible how a criminal managed to get the FBI under his thumb and use them to become one of the most notorious gangsters in history!

Gangsters, cops, FBI, dames and dolls. Good guys (who weren't), bad guys (depending on circumstance and outlook at any moment). Enjoyed it for awhile - 'til it got too long, too much the "same old". Did finally finish the last chapters after several months hiatus. Humanity finds a way to disappoint.

An epic telling of crime history.

An epic telling of crime history, both on the parts of the established criminals and on the part of the FBI agents that protected Bulger and made a nice living doing so,

I liked the history of it and the detail of corruption that was laid out.

That most of the corrupt FBI agents ended up in prison

I liked the different voices, he did a really good job at this.

Do you think Black Mass needs a follow-up book? Why or why not?

Nope. It really ends to me when Whitey goes to prison....and Connelly.