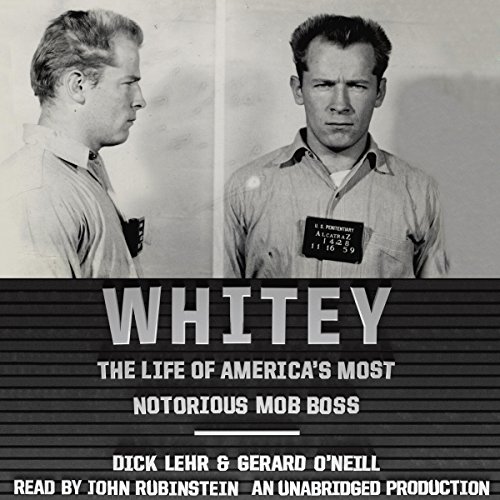 By: Dick Lehr,Gerard O'Neill
Narrated by: John Rubinstein
Try for £0.00

From the best-selling authors of Black Mass comes the definitive biography of Whitey Bulger, the most brutal and sadistic crime boss since Al Capone.

Drawing on a trove of sealed files and previously classified material, Whitey digs deep into the mind of James J. “Whitey” Bulger, the crime boss and killer who brought the FBI to its knees. He is an American original - a psychopath who fostered a following with a frightening mix of terror, deadly intimidation, and the deft touch of a politician who often helped a family in need meet their monthly rent. But the history shows that despite the early false myths portraying him as a Robin Hood figure, Whitey was a supreme narcissist, and everything - every interaction with family and his politician brother Bill Bulger, with underworld cohorts, with law enforcement, with his South Boston neighbors, and with his victims - was always about him. In an Irish-American neighborhood where loyalty has always been rule one, the Bulger brand was loyalty to oneself.

Whitey deconstructs Bulger's insatiable hunger for power and control. Building on their years of reporting and uncovering new Bulger family records, letters, and prison files, Dick Lehr and Gerard O'Neill examine and reveal the factors and forces that created the monster. It's a deeply rendered portrait of evil that spans nearly a century, taking Whitey from the streets of his boyhood Southie in the 1940s, to his cell in Alcatraz in the 1950s, to his cunning and corrupt pact with the FBI in the 1970s, and finally to Santa Monica, California where for 15 years he was hiding in plain sight as one of the FBI's Ten Most Wanted. In a lifetime of crime and murder that ended with his arrest in June 2011, Whitey Bulger became one of the most powerful and deadly crime bosses of the 20th century. This is his story.

"Whitey is the definitive word on the whole sordid saga of the Bulger mob. Expertly crafted, beautifully told." (Dennis Lehane, author of Live by Night)
“Having first uncovered the terrible Bulger story, Gerard O'Neill and Dick Lehr have now brought it full circle - a true circle of hell. Exemplary journalism, high drama, and, for Bulger's victims, an ongoing tragedy: rarely has a book mattered more.” (James Carroll, author of An American Requiem)
“ Black Mass, also by Lehr and O'Neill, was the definitive book on the corrupt relationship of the Boston office of the FBI and the notorious gangster, Whitey Bulger. Whitey will stand right next to it as the most in depth portrayal yet of the life of the man who ruled the South Boston underworld by terror and duplicity. In this ground-breaking, intimately researched work, we learn how he became the person who was feared by so many. Once you start reading, you don't want to put it down." (Bill Bratton, former Boston and NYPD Police Commissioner and LAPD Police Chief)

What listeners say about Whitey

The Ultimate Boss of Bosses!!

Whitey A Simple Nick-Name for Man who was Far from Simple in Mind! Devilish, Daring, as You are Forced to Admire His Brilliance, though Grudgin for The Public, but with A kind of Cheeky Wide Eyed Smile in Private, as You Wish You'd have had but Half of His Sense of Adventure.. Then, You Come to Your Senses, Realising such Behaviour is Never Justified!!

This book goes nowhere. Constantly dwelling on insignificant information, it's akin to the first couple of chapters of a biography, stringing the background story (to the actual story) out for 17 hours of dullness. If you know the basic story of Whitey you'll understand how rich that could be (and what I was expecting) but this book goes nowhere near it. Very disappointing and I would save your money.

Fascinating and well written but didn't need the excessive and overly detailed scene painting and ancillary factual indulgence.
Some of these trips away from the main thrust of the book, and there are many, right from the very beginning with a detailed history of US immigration are long and frankly a big distraction.
The author 's obsession with LSD almost drove me to slam dunk the whole book. Yes it is relevant and yes some facts are useful but an academic treatise? No!

Otherwise this was an excellent and obviously well researched piece of work that covered every angle of Bulger's life and how it intertwined with the FBI. John Rubinstein's narration is superb, perhaps one of the best I've heard on audible.

If you read about organised crime and are interested in the subject then this book is a must. If you just want gangster hits and anecdotes there are plenty of those about.

Great insight into the life of one of Americas most notorious mobsters. A lot more detail than the black mass movie

A very detailed account on the life and times of Whitey Bulger that included a lot of information that I had never heard before on any of the other books I had listened to about him...

brilliant insight into the mind and life of the infamous whitey. well worth a listen.

I saw the film "Black Mass" and wanted to know about this "Man". I wanted to know what made him the way he is known now. Now I have more insight and understand this was unfortunately his destiny. The stars were aligned for this Monster!!! I admit I was a wee bit prejudiced before reading this book. But the amazing way his story was written helped quell this predicament. I couldn't turn it off. I made excuses to listen as often as I could. I did other people's errands and cleaned my house more often than usual :). It flew by faster than I wanted. Oh my soooo good. I became the story covered within every word and every sound. After I finish writing this review I am off to listening once again. Enjoy!!!!!!!

The opening segment of this work claimed that James J. "Whitey" Bulger was, after Osama bin-Laden, "America's most notorious criminal."

That attempt at puffing up Whitey's imprint on our country, however, did not detract from the overall enjoyment of the book. This is the third in a trilogy of works devoted to the life and times of Whitey. This final installment, like the previous "Black Mass", is more an indictment of FBI corruption than a frightening account of a notorious Irish gangster.

In fact, rather than a "criminal mastermind" as described by the authors, Whitey turns out to be simply a local Boston-based hoodlum, with a penchant for hands-on violence, surrounded by a gang that couldn't shoot straight.

The authors' discursions into topical events of the 1960s, 70s and 80s are enjoyable and do not detract from the pace or direction of the story. Whitey's participation in CIA backed LSD experimentation on prisoners is one example of hidden nuggets in this work, otherwise freighted with minutia about Whitey, his family and criminal associates.

John Rubenstein does an outstanding job of reading this work. His delivery carried me over passages bloated with detail and historical data that, after a while, left me overwhelmed and numb.

In sum, a good story about a small time crook, whose grasp eventually exceeded his reach.

Worth the money and time.

Amazing story of a mob boss

What did you love best about Whitey?

Truly a case of truth being stranger than fiction !!

Good narration and easy to listen

Hands down, read this.

Whitey was ruthless, the background details of his life shine some new perspective on the things he did and how he got away with it all for such a long time.

If you like true crime, you can not pass this book up.

The story is accurate, detailed and well written. The story moved swiftly and was always entertaining along with being detailed and accurate.

great book if you are interested in sociopaths and organized crime or Whitey. this book gives great history about how he came to be and all the way to the trial