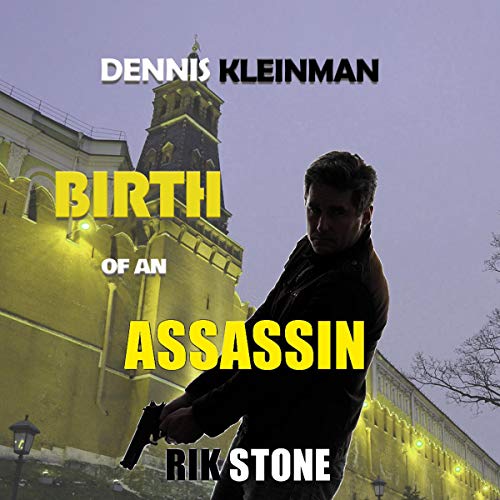 Birth of an Assassin

Birth of an Assassin

Amidst a murky underworld of flesh-trafficking, prostitution, and institutionalized corruption, elite soldier Jez Kornfeld is thrown into a world where nothing is what it seems, nobody can be trusted, and everything can be violently torn from him.

Ordered to disperse and arrest a crowd of Jewish demonstrators in Red Square, Jez is dismayed to find his sisters in their ranks. He sneaks them from under the noses of the secret police, but in doing so he has put his own security at risk; he has to get them out of the USSR. They cross into the Ukraine to a port on the Black Sea and he bribes passage for them from Soviet soil. Jez is happy in the knowledge that his sisters are safe, but he is unaware that his every move has been observed and that he has set in motion a chain of events that will plunge his life into a headlong battle to stay alive.

Since childhood, young Jesse Kornfeld's one ambition had been to be a soldier. Jewish, growing up in a rural area of Russia, the only son in a family of four siblings, he had listened to his father's stories and anecdotal advice until, at 15, still small and scrawny, he set out for Moscow to enlist. Given the fitting synopsis given, there is no need to further advance the story.

Birth of an Assassin is an intelligently written thriller told in the traditional spy story format, making it both detailed and fast paced. Characterisation is minimal but sufficient, the reader taking the natures of the protagonists from the fast advancing story. And it is the story which holds centre stage as Jez fights against corruption, betrayal and for the love that might have been, himself an unwitting pawn in a greater conspiracy.
Narration is by Dennis Kleinman, whose pleasant on the ear British voice fits perfectly with the novel. As well as reading with appropriate pacing, with eloquence and good intonation, he also gives separate voicing to the various protagonists, and never goes over the top emotionally as he relays the text. A good performance and well suited to the book.

A most enjoyable listen, and one which, I hope, will become the first of an ongoing series.
I was fortunate in being freely gifted with a complimentary copy of Birth of an Assassin by the rights holder, at my request, via Audiobook Boom. Thank you. It was a satisfying adventure, well rounded and involving which I would certainly recommend to fans of historically based spy and military thrillers. Or anyone who simply enjoys a good, exciting read.

Having been born in Poland in the times, when the Russian influence has been felt and hated on the daily basis and when Russian as a foreign language was obligatory to learn at school for all children – it felt not that comfortable to be sucked into a story of the times when the regime held the grip of the giant country of the Soviet Union. It felt uncomfortable, but nevertheless I felt hooked to the story. The language is vibrant, and the story is presented in a way, that it becomes alive. There is a suspense in the book that, together with the spy-story atmosphere as well as the quick pace of the story, makes it entirely ‘s unputdownable. It’s a coming-of-age story with a twist: first a boy, then a soldier, and then, a deadly force.

I was not too thrilled with the narrator, though. Dennis Kleinman’s way of reading and my ears don’t seem to match. But the story was good enough for me to listen to the whole book despite my not liking the narrator.

An observation: Petrichova, being a man, should be called Petrichov. The A at the end of the surname suggests it’s a woman, not a man.

Definitely enough to make me want to finish the series and find out what happens next.
A good story with plenty of intrigue and twists and turns!
Dennis is definitely a good reader and I enjoyed listening to the story but found his characters didn’t vary much from each other, so was sometimes confused as to who was speaking and was a little disappointed that there wasn’t a hint of Russian accent used despite all characters being Russian. This wouldn’t stop me from listening to him again though.
This is an honest review of a free review copy

There are some books that the suspense keeps me gripped, and I have to know what happens next. Other stories I love because I enjoy being in the company of the characters. I’m in no hurry to get to the end, in fact, I hope it never comes. That’s how I felt about Jez.

When a story has problems, they stand out like stones, easy and clear to see, but when it doesn’t, it’s like watching a river. It flows and is hard to point a single piece of moving water and say, ‘that’s what made it great.’ This story is like a flowing river. Easy to follow and enjoyable. Forget Red Sparrow, read Birth of an Assassin.

The birth of a great book

I really enjoyed this book. The author has a way of writing that draws you in from the first page and doesn't let up until the last. I like the way that you never know what to expect or what is going to happen next, other than plenty of of action to keep you hooked and invested in the story.
The one thing Jez has wanted to do all his life is join the army. One commanding officer sees his potential and he quickly rises up throughout the ranks, until one fateful day he has to make a choice that will change his life and career path for ever. He chooses his family over his country and his one time good friend and greatest supporter washes his of him leaving him to his fate. When someone starts trafficking young girls Jez is sent to investigate and he quickly realises someone is copying his play book exactly, is this a coincidence or does someone known what he did? Then the bodies start to pile up and it looks like Jez is going to take the blame for it, unless he can clear his name and keep a witness alive long brought to prove his innocence.
It was quite a different narrator very American sounding but I like him.

A Jewish boy dreams of becoming a soldier in Russia. He achieves his dream only to be faced with antisemitism in the military. A corrupt captain tries everything to discredit him, and failing, to murder him. This also is a failure. This story never slows down in a kill or be killed world. I was gifted this from the author.

I was sucked into the story from the beginning. Both the author and the performer did an excellent job of portraying the love that was enough to cause someone to perform an act of treason. I will definitely have to check out the rest in the series. I was given a free copy of this audio in return for an unbiased review.

this book was given to me for review

good cook and narrated well. suspense and love all in one place. enjoyed this book.

the details and character development excellent

the careful details and understanding the environment is incredible. Excellent character development without losing the exciting action. Slow to start but hang on the pace increases exponentially.

The people who survived

This book was enjoyable and interesting. I found it to be well written and narrated.

I was pulled into this book by Rik Stone from the very beginning. There is so much going on with this book from the action, the treason, the motivation, love, and corruption. I absolutely loved the twists in the book. The historical descriptions also added to the book. I thought the narration was really well done by Dennis Kleinman. Both the author and narrator were new to me. I requested this review copy audiobook and have voluntarily written this review. I would listen to more books by this author and narrator.

A new look at murder

The story kept me wanting more information. I did enjoy the different inclusions of family life. The story line seems to show that corruption is everywhere and that blackmail will last like cockroaches.