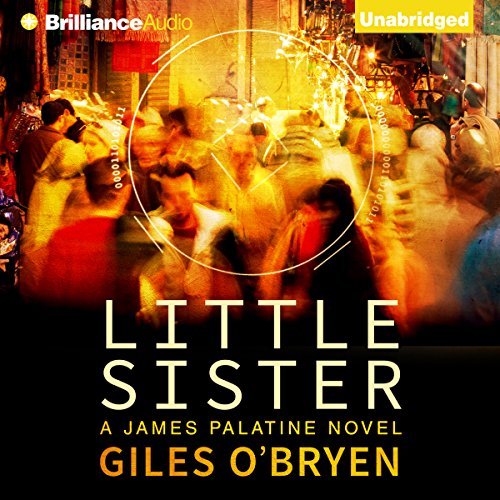 Little Sister has vanished. The prototype device - real name IPD400 - has powers of surveillance that governments and terrorist organizations would kill for. They might yet.

James Palatine, a trained killer with a surplus of conscience, invented the device and is the only person who can operate it. He's determined to retrieve it, and so is Natalya Kocharian - the arms dealer who "inadvertently" sold the prototype to a rogue dealer. But the current owner, holed up in the scorching void of the Western Sahara, won't give in without a fight. Meanwhile MI6, fearing for their own reputation, will do anything to beat Palatine to the prize.

With Special Forces on the move and the UN Security Council on high alert, the stakes are high. Knowledge is power, after all - and no secret is safe from Little Sister. Trapped in the desert and under attack from all sides, can Palatine simultaneously take on his enemies, his demons and the dangerous power of his own invention?

Good idea, worth sticking with it

As much as I love thrillers I found this one at times hard to follow. The general idea is great but in the spy/top secret world as usual who can you trust. If this were a film it would be one that you would have to concentrate on. I loved the main character James he was like a super human and very clever. He created a clever device named little sister or the the ipd400. that was sold in my opinion without really knowing what it could do. James went to try to retrieve it along with others who too were after it. With the odds not looking good who would retrieve it first???

For me James character made the book worth sticking with and I am interested to see how his character developes in the next book.

The narration was excellent, the swearing was at times excessive.

He stopped and listened for the sound of a diesel engine grumbling in the distance, then scanned the gloom about him. He saw no shape or feature that would offer shelter from the heat or cover from pursuers, nor the slightest indication of what lay in this direction, or that, or any other. It was as if the earth had been vandalised: scraped flat, blasted with sand and rock, then abandoned in disgust. You could measure time here in tens or hundreds or even thousands of years, nothing would change. A thornbush would wither, another would take its place. A colony of ants would mine an oval of baked dirt until it collapsed, leaving a tiny depression behind. A rock would split. He’d covered fifteen miles – no more, perhaps less. In an hour the sun would be up. In three, the surface of the desert would start to warp in the heat. It is far too early to lose heart.

Little Sister by Giles O'Bryen is the first book in the projected James Palatine thriller series. The title almost put me off as I thought it would be a family drama. But I was dearly mistaken. It is a hard-boiled techno-thriller with strains of espionage, action, adventure, mystery, suspense, military, political intrigue, and a protagonist many listeners will come to love. James Palatine is a well-fleshed character, intelligent but with a body as sharp as his mind.

Author Giles O’Bryen has drawn up an interesting premise on which the novel revolves. Little Sister refers to a secret weapon which Palatine has developed. The device has fallen into the wrong hands. It is up to James Palatine to recover it. The drama that unfolds is quite relentless and breathtaking. It criss-crossed countries and cities, from well-furnished offices in the cities to the open skies of the torrid desert, Little Sister is an entertaining listen which will leave you mesmerized – not only on a single count, but a variety of reasons. What is most definitely great about the book is the flowing narrative and style. It was great to follow the characters around, be drawn into the intense drama of the plot, but above all, the flowing narrative was the icing on the cake.


James Clamp was excellent with the delivery of the story

7 of 9 people found this review helpful

Better as a book?

As other reviewers have noted, the narrator generally does a good job, the one glaring flaw being the peculiar choice of a near-bass voice for the main female character. I think the narrator was trying to channel Natasha Fatale (of the Rocky & Bullwinkle cartoons), but failed to consider how deep, sultry tones sound with male vocal cords—especially in conjunction with the voices used for male characters. It’s distracting, to say the least.

The story is a good espionage/ thriller, with lots of twists and turns, grisly violence, and an exotic, interesting, current background. The writing is even lyrical at times (and better than some of the “literary” fiction I’ve read. But I think this book would be better served read over the course of a few hours while at the beach or on vacation rather than drawn over 3-4 times as long in an audiobook. Combined with this performance—save your money/credits and get it as a paperback.

The narration was great as the speaker was able to transition between characters flawlessly. Good story.

The story is good, but it is extremely disconcerting that the female lead's voice is the deepest male-like voice of all of the characters.