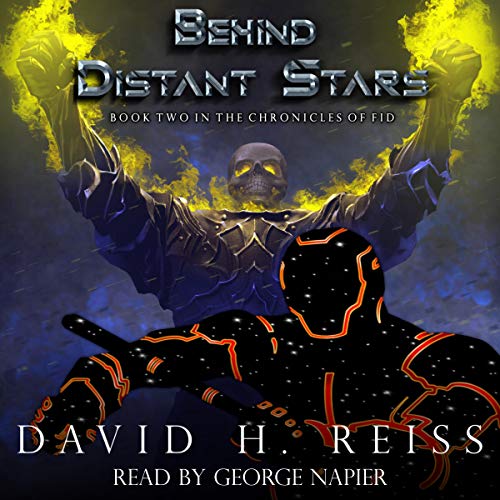 By: David Reiss
Narrated by: George Napier
Try for £0.00

His reputation had been secure.

He was the world's most feared supervillain!

But then he saved the world....

News cameras had captured every moment of the battle in which Doctor Fid single-handedly averted an alien invasion. As details emerge, the public discovers how close the Earth had come to inescapable subjugation...or to complete annihilation.

Notoriety is important to many of Doctor Fid's long-term plans to punish the unworthy, and this shift in public perception threatens to undermine decades' worth of effort.... But it also presents a tempting opportunity.

New dangers arise, and through it all Doctor Fid must struggle to decide what role he will play. Can the notorious supervillain set aside his endless quest? Can Doctor Fid become the hero that the world needs?

Or will he remain the villain that the world's heroes deserve?

Any fan of the superhero genre will love this supervillainous novel. Read book two in the series that critics have called innovative, snarky, and ridiculously fun!

What listeners say about Behind Distant Stars

Reiss is starting a patern

I really like this series and this writing. one problem though, Reiss is really rushing the endings. I mean great story then light speed ending - "then they all lived happily ever after". He's putting in MUCH less work for his finallies. I'd be really angry if the book wasn't so good.

I will be listening again. Looking forward to the next one. One of the best.

Even Stronger than the First Book

The notorious Dr. Fid returns with something of a public relations problem. It turns out that saving the world—even when you had to beat the heck out of a ton of super heroes to do it—softens your image as the baddest of the bad. Add to that a couple of unfortunate instances caught on tape—like saving a falling cat—and the world is asking if Fid has had a change of heart. Could he be becoming the thing he hates the most—a super hero?

Fid, being Fid, decides to use this confusion to pretend to become the hero in question, just so he can further expose how unworthy heroes are of the public’s respect, but in doing so begins to learn that the world is much more complicated than the black and white image he has clung to throughout his career and the journey he has started down might just be more true than he wants it to be.

It’s amazing that a novel that is as heavily psychological as this one is, could also be packed to the gills with amazing action scenes. David Reiss has given more thought to the armored hero / villain than the creators of Iron Man ever did and the reader benefits tremendously from this care on his part. Plus, Fid is a scientific genius to put Tony Stark and Reed Richards to shame and this time he really has to put his IQ to the test as he struggles to unravel numerous complicated puzzles in both his heroic / villainous career and his personal life.

Add to that his developing relationship with a couple of heroes you know he wants to like, his touching guardianship of Whisper, a child AI who oh so obviously reminds him of his long dead little brother, and even his deteriorating relationships with the villains of the world who are convinced he’s going soft, and you have a wonderfully well-rounded novel filled with action, mysteries, and genuine personal growth.

Part of the strength of the series is that I’m really not certain where Fid will end up in his personal journey, but I’ve already started the next book so I can find out.

Second book was another fun ride with Doctor Fid and the gang! Waiting eagerly for the third installment!

a lot of fun

very much enjoyed this book. good story, some disappointment in that the "hero" of the story didn't quite doas I hoped.

A well written book filled with amaginative psudoscitific joy and amazing Eldredge horrors. Dr. FiD is remarkably conflicted and human for such a monster. Read and enjoy!

Really enjoyed the sequel. Fantastic advancement to the story and had some great funny moments.