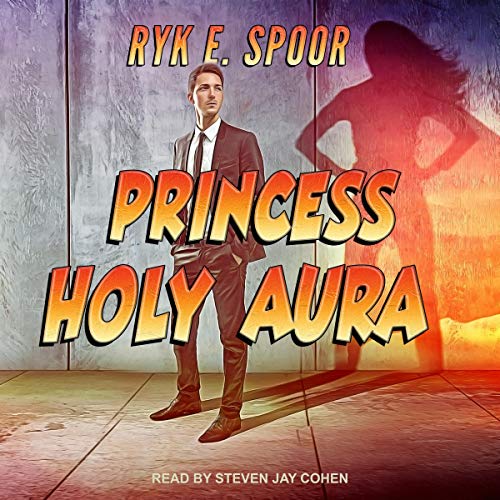 What would you give to be a hero? Stephen Russ never expected to have to answer that question; he went to work, he stayed in his apartment, sometimes had friends over, and the worst thing he'd had to face was looking for a new job after losing his old one.

But that was before a child's desperate scream led him into an alley filled with faceless winged things that almost killed him, before the strange white rat spoke to him, calling itself Silvertail Heartseeker and telling him that this was but the beginning, that the Stars were almost Right and the forces of Azathoth Nine-Armed would soon be unleashed against the world...before Silvertail said that his courage and willingness to risk himself made him the perfect choice to be one of the defenders of the world against this evil.

A defender named Princess Holy Aura, the first of the five Apocalypse Maidens.

A more serious spin on the magical girl genre

Reading the description, I thought this book would mirror some other books and even anime who poked fun at the Maho Shoujou (magical girl) shows by having a male protagonist transform into a female one, but in those superficial aspects is were the similarities end.

Princess Holy Aura just feels more realistic. I actually could suspend disbelief and empathize with the MC taking on the mantle that dropped into his lap and the issues he ran into. The usually silly flippancy of shows like Sailor Moon isn't there or at least is muted considerably. It's refreshing in a way to see this given its due.

Now, that isn't to say that this is a dark grit fest, but since it is a more serious look at a more comedic genre it can be darker at times.

Either way, it was a fun listen and they picked a good narrator for it, so it makes it easy to listen to. While I think in this case the production may have benefitted from dual narrators, I still think the performance was great and worth a listen.

For anyone who ever wanted to be a hero

This book captures what it is like to be a magical girl hero in a magical girl hero group. You are lead on a journey of honor and betrayal and redemption while exploring territory that is not often pursued in mainstream fantasy novels. If you had ever wondered what it would be like to be suddenly given the chance to save the universe while risking your very sense of self, I highly recommend this story. Be prepared to fall in love with the characters and feel both joy and sadness when the story ends.

An entertaining story with some unexpected twists. Being what it is, I didn't expect there to be a romantic theme, but it was handled nicely.

Avert the Apocalypse! Listen to this book!

Magical girls and those of us who live and raise them, this book is for us. The genre, with its well-known heroines like Sailor Moon and She-Ra, is something that's easily made fun of, so it's hard to do it justice without making it seem hokey.

But, with Princess Holy Aura, Ryk E. Spoor does it. Brilliantly. For the honor of all bishoujo senshi everywhere, he makes it work by twisting the trope and adding just enough common sense to make it even more enjoyable than I thought.

The audiobook is masterfully performed by Steven Jay Cohen. The characters are phenomenal, the pacing and emotion are fantastic, and I'm crowing aloud in my kitchen at battles and revelations while doing dishes. He commands a diverse cast, but his Silvertail Heartseeker voice is my favorite.

This author has earned a new fangirl. Now, if you'll excuse me, I'm gonna keep listening, and I can't wait for the next book in the series.

Also, I want a stuffed Silvertail for my shelf.