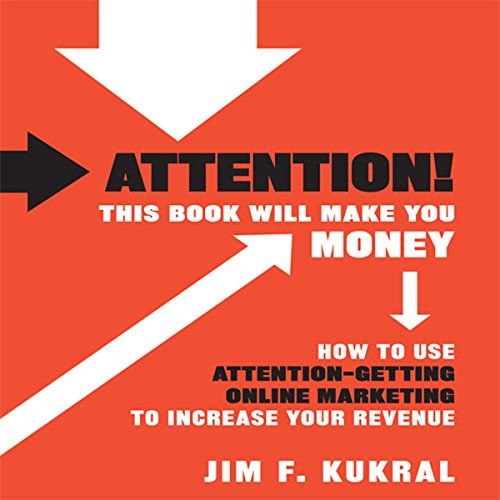 Attention! This Book Will Make You Money

What’s the one common factor among entrepreneurs who create and grow successful online businesses today? Attention. They know what kind they need. They know how to get it. They know how to maintain it. And they know how to make it pay over the long term. Want your business to get the high quality customer engagement it needs to thrive? Attention! This Book Will Make You Money is the only guide you need.

Whether you’re starting a business, expanding or revamping an existing one, or just hunting for the latest marketing techniques, Attention! This Book Will Make You Money provides you with a complete online toolbox for bringing in the customer traffic you want - the kind that boosts your brand while driving revenue and profits.

In easy, bite-size sections, Attention! This Book Will Make You Money gives you winning techniques and strategies including:

Filled with case studies, references, and proven examples of what works online, Attention! This Book Will Make You Money is your one-stop road map for success in today’s social Web marketplace.

What listeners say about Attention! This Book Will Make You Money

This book is 7 hours 52 minutes but would have been so much better if it had been about a third as long. The narration is so desperately dull that if you were stuck in a lift with the narrator and he struck up a conversation with you, you'd want to beat him to death after a few minutes just to shut him up.
Having said all that, if you persevere and ignore the authors self promotion and irrelevant examples, there are some little nuggets of gold in here. If you have the time and patience and the willingness to sort the wheat from the chaff, go for it.

This was a complete waste of a download. This is really basic stuff... perhaps if you fell into a coma in 1984 and only just woke up you might find it useful.

I love this Book!!

You will not be disappointed. Little slow start until 40-445 minutes and watch out. You'll have to pull over (if driving) every few minutes to write down an idea that hits you!

On How to Get Rich Quick

Would you try another book from Jim F. Kukral and/or Walter Dixon?

This is roughly my 30th download and my first review.

I recently read Lean Start Up, Delivering Happiness, and Flow. Those books reflect what I believe business is about, which is creating value intelligently and with high integrity. Those authors are intelligent and mature, and they have clear ideas that are sufficiently novel.

This book is about creating hype without regard to creating value. And the tone is repulsive.

A Shot Of Pure Motivation For Internet Marketers

I joined Audible.com less than a month ago and this was my first download. Although I've been working in the online marketing industry for 7 years, I wasn't familiar with the author (Jim Kukral). I would guess that I've read 25 books on this subject, and this was one of the very best.

There are so many ideas in here, but what stands out the most now that I'm finished is how much Jim motivated me to keep moving forward with my web-based business venture. As a big bonus, Jim even offers readers/listeners a complimentary phone consultation, which I took advantage of today.

Buy or download this book...you will not be disappointed!

Fun to read, fresh, and enlightening

Fun to read, fresh, and enlightening. If you're brand new to the world of internet marketing and social media this is the book for you. This book is filled with winning strategies, ideas and motivation.

Very good material in this audio

Very good material in this audio. I have 2-3 pages of notes I've taken from this audio. Lot's of future use in my business.

Where does Attention! This Book Will Make You Money rank among all the audiobooks you’ve listened to so far?

It's on my list of something I'd listen to more than once. There are few books on that list.

The examples were funny and I can tell Jim believes in what he's talking about.

Because of this book I've followed Jim's blog and bought a couple of his other books. I think he's a genuine guy. I wouldn't follow all of the advice in this book, but I think that's the case with any book. You always have to adapt advice to your own situation. All in all, I would recommend this book as part of several when learning how to market your business.

Not quite what I was looking for

There were some good ideas about using a specific marketing plan, rather than a media blast.

Did Attention! This Book Will Make You Money inspire you to do anything?

I tried one of his techniques on my blog.

This book was not what I was looking for, but I still gave it 3 stars because it may be useful for others. The book contains some interesting stories and examples, but is slightly dated. Online marketing changes quickly. Attention! spends unnecessary time presenting the case that online marketing and social media is important. Most people now understand this. The first part of this book explains why getting the right kind of attention is important for marketing and business in general. No surprise there. Next, the author lists a lot of people who are “that guy” and can promote products, secure book deals, and make things happen because they have earned celebrity status in unique ways. He elaborates that businesses or groups can be “that guy” and achieve the same results. To be really honest, I grew tired of hearing the term “that guy.”I am a relatively new student of marketing and promotion. I tried some of the attention getting ideas as I read the book, but on a small scale. There was a good section about using You Tube or blogs to get attention of key people, rather than blasting a social media message at random. The idea seems brilliant, though I have not yet used it successfully. I did try it in a blog post titled, Fix My Harley - A Brilliant Idea, to ask people who see the blog and video to offer advice. Originally, I was going to purchase a domain name and build this into an interactive do it yourself site, but it has already been done. Jim Kukral's handling of the possibilities is much better than I am making it sound. This part of his message was excellent. Unfortunately, other attention getting ideas were offensive. In one section about blogging he suggested to “go negative” and while writing a negative blog might be necessary, I cannot advocate doing it just to get attention. There are a few qualifying statements afterward, but the fact remains that he went there and I don’t want to follow. Some examples were clownish (wearing silly clothes), but this technique has a long history of success, so I don’t knock it.I found his discussions of the following topics useful and insightful:- Limitations of press releases- Limitations of media blasts- Benefit of one on one media contacts - respect their time - have your pitch ready - be on topic - lead with credibility I didn't find the section on idea generation particularly helpful, because I bought the book looking for ways to implement ideas I already had. The suggestions were good, but not terribly original. I may implement the suggestion to wear a special hat during idea time, because hats are fun, right? The psychology behind this idea is sound. Having a set time and environment can be a good practice for generating ideas or writing. There were too many examples of marketing ploys. Two or three examples of eating contests would have been plenty, but the narration of examples for this one technique went on until I wanted to turn the audio book off. The most aggravating thing in the book was the constant web site links. I felt like I was on Google constantly (distracting). This is a trend I see in a lot of nonfiction books lately. When I purchase a book, I want to read it, not surf the web. I can do that for free. Some people will really enjoy this aspect of the book. I didn’t. I wanted to like this book, and still believe others may find it useful. It was not what I was looking for. If you don't know that you need to get people's attention to market products and if you have not embraced the value of marketing online (social media, videos, and blogs) then this book is a must read. If you are looking specifics, there are some, but not enough for my taste.

This book is full of short stories about how people succeeded in business by doing things a bit different.
This book will get you thinking
A must read

A Good Book at a Great Time

As a guy who's trying to get his company and himself known online locally, this book is a godsend. I'm more motivated than ever before to go ahead with my ideas.