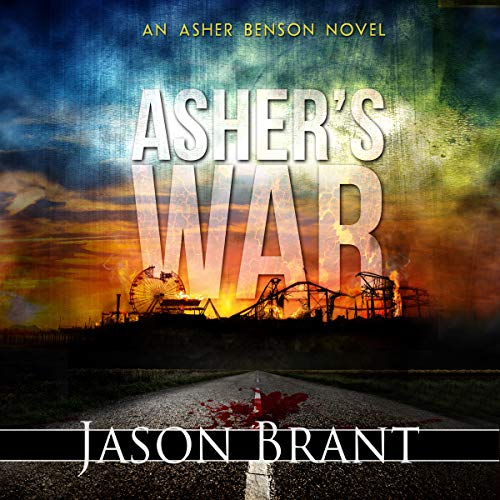 Asher Benson has been living on the outskirts of society for years. After surviving a devastating terrorist attack in the mountains of West Virginia, he abandons a life of solitude to rejoin a fight he thought was long behind him. Drowning in survivor's guilt and plagued by the death and destruction that always follows him, Ash dedicates himself to finding the terrorists responsible for destroying an entire town.

When a new threat arises in Washington, D.C., the entire nation descends into chaos. With a team assembled from retired Special Forces warriors, the snarky Nami, and the ever-vigilant Drew, Ash goes in search of the man who brought the country to its knees.

Asher's War is the third book in the Asher Benson series of novels, which are full of sarcastic humor and non-stop action.

Love Asher and Wayne June. We do not see enough of both.
I have been checking Audible for over 2 years to see when the next one was coming and then POOF, it just appeared out of nowhere. It was not even in the Coming Soon section.
Greatly enjoyed this book.
If you like a thriller with action and sardonic, sarcastic humor, throw in some supernatural flavor then most assuredly read ‘em all!
Wayne June is great; he also performed the book Pray by John Prescott a few years ago and I have been waiting for that sequel even longer. Maybe it will appear too so if someone knows please let me know. Prescott is MIA. But this is about Asher Benson and his ragtag team. I wish the book was longer, only complaint.
Mr. Brant and Mr. June please keep them coming; I earnestly request more Asher-type books, including ECHOES, the 4th installment. I will keep checking Audible! Mr. Wayne is very slow to release audiobooks, do not know why as he is one of the best in my opinion.
I am a faithful and long suffering fan and can’t find much info but very much enjoys this book.