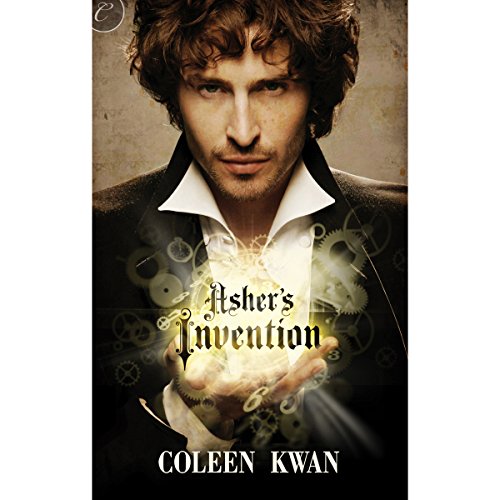 By: Coleen Kwan
Narrated by: Elizabeth Jasicki
Try for £0.00

Five years ago Asher Quigley broke his engagement to Minerva Lambkin, believing she was an accomplice in a scheme to steal his prototype for a wondrous device. Minerva swore she was innocent, though the thief - and Asher's mentor - was her own father.

Now sheer desperation has driven Minerva to Asher's door. Her father has been kidnapped by investors furious that he's never been able to make the machine work. Only Asher, now a rich and famous inventor in his own right, can replicate the device. He's also become a hard, distant stranger, far different from the young idealist she once loved.

Despite their troubled past, Asher agrees to help Minerva. He still harbors his suspicions about her, but their reunion stirs emotions and desires they both thought were buried forever. Can they rebuild their fragile relationship in time to save her father and their future together?

What listeners say about Asher's Invention

A very interesting steam punk story...I liked it but didn't love it, 3.5 Stars.

This specific video review will be included in the October 2018 wrap-up.

This was an alright read. Asher was an inventor and one of his inventions was stolen by his mentor five years before and Asher thought Silas’s daughter Minerva, the woman he loved, had been part of the theft so he broke off their engagement. Now Minerva shows up at his door needing Asher’s help because her father has been kidnapped.

Anyway, the invention Asher had been working on when it was stolen was a perpetual-motion machine and now Silas was kidnapped because the kidnapper thought it really worked. He wanted the machine brought to a bridge at midnight and Minerva was to bring it alone. When Minerva got to the bridge that’s when became very exciting.

There was a HFN, no swearing, and some heaving petting but no sex. I am going to read the next novella, Asher’s Dilemma, to see what happens with Asher and Minerva. This one wasn’t a cliffhanger but I think you should read this one before you read Asher’s Dilemma.

As to the narration: Elizabeth Jasicki was barely okay for me. Her men’s voices weren’t all that great and what emotions she did read with were all in the wrong places.

The narration was good. I liked the smooth cultured tones that depicts the stories era. Unfortunately that's the only good thing I can say about this story. The female lead was kind of foolish and ineffective, there was no chemistry between the main characters and the story was overly predictable.

I loved the story, however the characters needed more development and the love triangle was not very believable. Despite the story having some steampunk elements, I would not classify this as true steampunk. Also the whole empowered feminist subplot came out of nowhere and really had no place in the story.

It did not have enough steampunk elements, inventions, character development, and the love triangle needed little more prominence. And as for the empowered feminist subplot, although interesting, had no place in the story and despite Minerva's attempts to be stalwart in the face of adversity, she really is weak and unbelievable as a 'strong female' character. Even though the author did an exceptional job in drawing out the sexual tension, it was never consummated. If she went on to do a sequel detailing their relationship and more of their adventures I think it would be fine. However, this was more of a one shot short story versus a full-length novel that could become a series, I was disappointed.

Could you see Asher's Invention being made into a movie or a TV series? Who should the stars be?

It might make a good mini series but due to the lack of character development, chemistry and weak subplots it would not be able to stand as a film or a tv series.