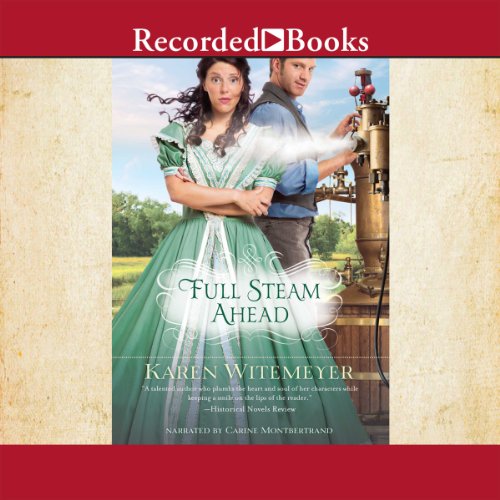 By: Karen Witemeyer
Narrated by: Carine Montbertrand
Try for £0.00

When Nicole Renard returns home to Galveston from an eastern finishing school, she's stunned to find her father in ill health. Though she loves him, he's only ever focused on what she's not. Not male. Not married. Not able to run their family business, Renard Shipping. Vowing to secure a suitable marriage partner, Nicole sets out with the Renard family's greatest treasure: a dagger personally gifted to Nicole's father by the pirate Jean Lafitte. Many believe the legend that the dagger is the source of all Renard Shipping's good fortune, though Nicole is sure her father's work ethic and honorable business practices are the keys to their success. Before she can board the steamer to New Orleans, Nicole finds her father's rivals--the Jenkins brothers--on either side of the gangplank, ready to grab her and steal the dagger. Quickly, she decides to instead travel north, to Liberty, Texas, where she can decide what to do next. Darius Thornton needs a secretary--someone to help him get his notes in order. Ever since the boiler explosion aboard the Louisiana, Darius has been a man obsessed. He will do anything to stop even one more steamship disaster. The pretty young socialite who applies for the job baffles him with her knowledge of mathematics and steamships. He decides to take a risk and hire her, but he's determined her attractive face and fancy clothes won't distract him from his important research. The job offer comes at exactly the right time for Nicole. With what Darius is paying her, she'll be able to afford passage to New Orleans in mere weeks. But Mr. Thornton is so reclusive, so distant, so unusual. He can create complex scientific equations but can't remember to comb his hair. And his experiments are growing more and more dangerous. Still, there are undeniable sparks of attraction between them. But Nicole is leaving soon, and if she marries, it must be to a man who can manage a shipping empire. Darius certainly doesn't fit that description. And the Jenkins brothers have not given up on kidnapping Nicole and seizing the Lafitte dagger for themselves.

What listeners say about Full Steam Ahead

I've been a HUGE Karen Witemeyer fan since I first read "A Tailor Made Bride." "Full Steam Ahead" didn't feel like the author I fell for in that first novel. While parts of the story were very good, I didn't connect with the characters as I had in her previous novels. It's something that I can't pinpoint, or put my finger on, but it was frustrating. I loved the historical aspect of the story, and the science behind the steam engines, but it seemed like so much was repeated, plot lines were emphasized and re-emphasized again, and I wanted more than that. Frankly, I expected more than that.

A big issue was probably the narration. Yet again, 2nd book in a row, an old sounding narrator for a book about young people. I honestly feel like had the book had a better narrator, one that didn't speak so slowly, or emphasize certain words the same way every time like, "Lafitte Dagger," it would have been smoother, and I could have connected more to the characters. Now, Carine Montbertrand was definitely not as bad as the narrator for "Stealing the Preacher." That's a book I had to return and buy in print. Looking back, I might buy this one as well and re-read it.

I felt like giving the overall rating of this book a 3 out of 5, but I'm giving it the benefit of the doubt by making it a 4. I enjoyed the story, I liked how the characters met and interacted, but there was a disconnect somewhere.

Definitely worth the credit if you're a fan of Karen Witemeyer, or enjoy a nice easy listening Christian romance. It's just not up to the level I expected based on her previous works.

I really enjoyed the plot as well as found it very enlightening of the travel trouble of the day. I saw a little of me in Nichole. Great book!

I really enjoyed this book by Karen! fast paced, fun book to read, or listen to.

Determined to finish it.

This book was not my favorite, but I am glad I kept picking it up to finish it. It is not what I expected/wanted from a Witemeyer book. Tailor Made Bride & Short Straw Bride & Stealing the Preacher (read in that order) were fantastic. I have listened to them more than once. Full Steam I probably won't read again.

Darius's story at the beginning of the book made me cry....I physically had to dry my tears, hug my son and husband, and then pick it back up to read.

I had a hard time wrapping my head around these christian people putting so much stock in a "Lucky Dagger". They risked their (and their daughter Nicole's) life on keeping this dagger in the family. Nicole continually defied her father to prove she was as good as a son (she was definitely better/smarter than a son). During her defiance she used her intelligence and wit to rescue an emotionally traumatized Steamboat Fleet Owner (Darius Thornton).

There were also a LOT of musings by Nicole about this childhood boy friend who she loved dearly and hadn't seen in a very long time. It didn't seem to have a solid purpose in this book, but I think that it might be just a set up for a sequel. I would be willing to listen to the sequel (if one comes) because I believe Karen is a great writer.

I am glad I read it, but it has put my Witemeyer craving on hold.

Nicole and Darius characters are well defined, fun, and yet completely different from characters in Witemeyer’s other books. Their faith as math-minded people is presented in a realistic manner.

The plot is excellent, although the ending is rushed or perhaps it goes one scene too long. Readers who love historic facts will really enjoy this book. The love story is woven together with chemistry and the “steaminess “ is in more than the engines. However, it remains PG13.

What I love about this book is that perfect blend of physical, emotional and spiritual love. More Christian authors need to study Karen Witemeyer’s work.

Nicole Renard is determined to protect her parents and make sure the Jenkins brothers do not take the Lafitte dagger. However, when her father sends her to New Orleans to find a husband and suitable heir to his shipping business, things don’t turn out as planned. Lack of ready funds finds her as secretary to a man obsessed with making steamboat engines safer. Then, Darius Thornton starts heating up her heart, and with the enemy hot on her trail, the scene is set for an explosion of huge proportions.

I found this novel to have a slower start than most of Karen Witemeyer’s. Until chapter four, I begin to wonder if I’d have to rate a book of hers less than five stars for the first time. And the fact that a single woman from a well-to-do family in 1849 would not have been sent to New Orleans to find a husband without a female chaperone just increased my concern. However, the book took off after that, and I found it hard to put down. It turned out to be just as engaging as all of Karen Witemeyer’s books, and the narrator does a great job, as well, in the audible version. #UnlikelyHero #HappyEnding #FeelGood #Feud #AmericanWest

Darius and Nicole are a well matched pair as both are incredibly smart.
Intrigue and danger (not only from exploding boilers) abound in this great romance. This is also a story of great family love. "When a man loses his family, he loses everything."

if you like Karen Witemeyer books I highly recommend you read this one .. this was so amazing and the story is uplifting in so many ways and the relationship between Nicole and Darius is so deep that I couldn't help but to fall in love with them both, give this a try if you are in the mood for a cute adorable christian fiction book

The narration was good .. but I feel like the other books of the same author were narrated better

There was a pretty good story behind this, but I think it might be the sort of book I'll veer away from in future. So many of them are alike with theme variations. Damsel in distress falls for the handsome yet aloof employee who ends up being so impressed with her strength and character that he falls in love too....all in two weeks! End of story. Except that in this one there was a whole lot of discussion about boilers for a steam boat. Not the least interesting for those of us who find steam engines and discussion of them boring. Okay, I'm being mean.
Sorry. I'm done.

the story was well written but the narration was distracting. for this book,it was very slow and drawn out in places and quick and high pitched in others. i could listen to it but it was irritating.