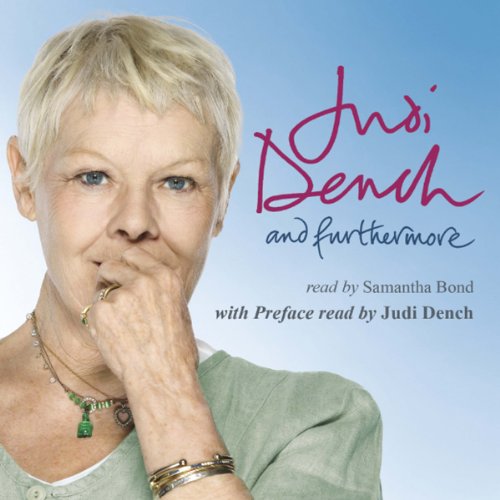 By: Judi Dench
Narrated by: Samantha Bond
Try for £0.00

From the moment Judi Dench appeared as a teenager in the York Mystery Plays it was clear that acting would be her career. Trained at London's Central School of Speech and Drama it was her performance in her 20s as Juliet in Franco Zeffirelli's memorable Old Vic production that turned her into a star. In the theatre since, she has played every classic role from Titania (three times, most recently in 2010) to Cleopatra.

She first became a household name via television, thanks initially to a sit-com, A Fine Romance, in which she played alongside the actor Michael Williams, whom she married in 1971.

She has since made eight series of another sit-com, As Time Goes By (with Geoffrey Palmer), as well as plays and classic serials, Middlemarch and Cranford.

In the cinema, her films have ranged from Ladies In Lavender, opposite Maggie Smith, through Notes on a Scandal with Cate Blanchett to Shakespeare in Love, in which she played Queen Elizabeth, a role that gained her a Hollywood Oscar. But it is her role as 'M' in six James Bond films, beginning with Goldeneye in 1995, that has gained her worldwide recognition. This book is, however, much more than a career record.

What listeners say about And Furthermore

A must listen biography

I thoroughly enjoyed listening to this biography. Ideal for anyone who has an interest in the theatre and the greats who walk the boards not to mention a big dollop of Dame Judi's dry wit! Pure pleasure.

Would you listen to And Furthermore again? Why?

It was full of humour and from the heart. And from the brain too. Wonderful and beautifully read by Samantha Bond. Funny and intelligent, very humanly told.

Listeners who thought this was uninteresting must have been listening to something else by accident.

I love you judi

Such a treat hearing your words read so well by Samantha Bond.
Judi keep doing all that you do. You are so bloody good at it, don't ever stop

Perhaps more for the actor than the average reader

What made the experience of listening to And Furthermore the most enjoyable?

I am an immense fan of Dame Judi Dench and enjoyed the background information on the work she has done and indeed the choices she has made during her acting career.Even though Samantha Bond did an excellent job in reading the book I would have paid double to have Dame Judi Dench read it herself.

I found the story line quite technical in parts and referred to actors and actresses with whom I am not familiar. I appreciate in an audio book pictures and biographies of every actor is not really possible but even abbreviations used were sometimes hard to follow.

Samantha Bond did an excellent job in reading the material and at times even accentuates certain words as Does Dame Judi Dench.

Am I really a Dame?

Interesting book, Enjoyed listening to it and learned a great deal from it. No regrets in purchasing it.

If you could sum up And Furthermore in three words, what would they be?

What was one of the most memorable moments of And Furthermore?

As they are of a similar ilk you could almost hear Judi speaking herself. Expertly executed!

Not out loud but I chuckled and smiled. A little saddened but not tearful.

A wonderful biography of an exceptional actress. Enjoyed every minute.

Shame that the book is read by someone else. I would have preferred Judy's voice. Kristina

This book read like a CV, a chronology of roles through the years. It lacked any emotion or personality. I was very disappointed, as I admire Dame Judy Dench as a tremendous actor and expected to gain some insight into the person through this audio book.

It’s a shame Dame J didn’t narrate but Samantha Bond does an incredible job. And the words are golden.

I didn't realise that the Book was read by someone other than the great Lady herself. It was a big shock, almost like taking a big bite out of a beautifully ripe strawberry and tasting pickled onion. I gave up after a very short time because I missed Judy Dench, her story lacked the silk of her voice, her nuances and timing. For me this proved to be a waste of money however I would consider buying the written version.

I absolutely love Judi and it was lovely to hear her story. Sam is a great voice to portray her and this must be one of my favourite books. There is so much information about the theatre that I realy must listen again. Thank You