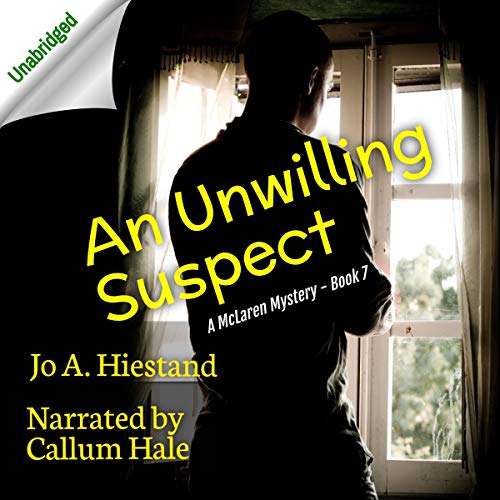 McLaren’s fiancée tragically died one month ago. Trying to heal emotionally from her death, McLaren settles into a rented farmhouse in the woods near picturesque Lake Windermere in Cumbria. But he’s barely had a chance to rest when Helen, the woman in the neighboring cottage, is killed…and is discovered near his front door.

Because McLaren had spent much of the previous day with her, and his snowy footprints lead to and from her house, he becomes the prime murder suspect in what the police label a frustrated romantic advance.

Motives for Helen’s murder are as chilling as the outdoor temperature. There’s the hands-on garage mechanic who’d like to put his hands all over her, the affluent fishing guide, and Helen’s former boyfriend who wanted to renew the relationship.

Can McLaren find the killer before the police jail him for murder?

What listeners say about An Unwilling Suspect

In "An Unwilling Suspect" McLaren retreats to a farmhouse on loan sited on the edge of Lake Windermere in northwest England, needing to heal from his fiancee's murder--a broken man with his sanity in the balance.

Any such healing is circumvented after he becomes a suspect in the murder of a neighbor, her corpse deposited afterwards near the drive of his residence.

Matters escalate as McLaren endures constant police surveillance and suspicion, arson and attempts on his life. He is slammed with dead ends as he desperately investigates the murder in question before he faces incarceration.

I think I'm so smart! Never ever came close to figuring out this mystery...not the murderer or the motive. Hah!

I read on until 2 a.m. in the morning until the final pages and the denouement on the stormy sands of Morecambe Bay.

Listening subsequently to the audiobook version and the skilled interpretation of Jo Hiestand's masterwork by Callum Hale brought me to a whole body immersion in the experience.

Each character's voice was distinctive and instantly recognizable throughout the narration.
I must say that McLaren's voice betrayed his inner psyche--hard-boiled copper exterior over an inner softie.

great mystery with a great narrator...

I read the digital copy of this book a few years earlier. I left a review that I hope represented what a well-written, great story, it was. The McLaren series is one of my favorites. The stories combined with her creation of ex-cop Michael McLaren have made me a fan. Her books, often impossible to put down. But once read, who would think an audible book could catch and keep my attention? I'll tell you why. I think when you have a good story to start with and add an excellent narrator, it becomes like another "book". Another story. This particular narrator puts you right in the room with the characters, right in the midst of the story.
The narrator, Callum Hale, does such a good job at portraying various characters. He seems to be able to make it clear who is speaking without making drastic vocal changes. It's a very subtle inflection combined with a rather slight change in the timbre of his voice. And...he has a good voice. No matter how good a story, the wrong narrator can ruin it. That most certainly has not happened here. Hiestand must be awfully glad to have found Callum Hale to narrate her good book.

This was definitely another suspenseful and thoroughly entertaining book in the McLaren series. My heart went out to Mike as he obviously needed the time to grieve the loss of his fiancé but instead was thrown into having to defend himself in a murder charge. As usual, there were plenty of twists and turns in the story and a surprise at the end. Mike has to work hard to avoid jail as well as keep from getting killed himself! Of course Callum Hale once again does a remarkable job with the narration making listening to this audiobook totally enjoyable. Definitely a book I would highly recommend.