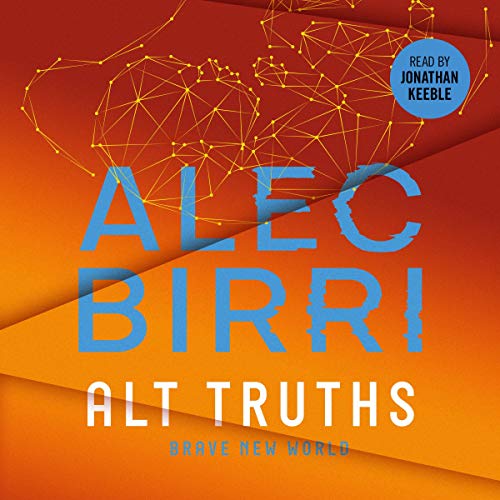 By: Alec Birri
Narrated by: Jonathan Keeble
Try for £0.00

The concluding novel in the Alt Truths duology.

So, Richard and Sarah find themselves the unwitting "ingredients" in Perry’s latest attempts to create a melting pot of world happiness. But the boy isn’t the only savant, and when our hapless heroes discover an African war criminal is using a "super-savant" to impose his version of global order, it looks as if Utopia is going to have to wait.

Oh well, at least the US president seems happy now he’s managed to wrestle back control of his nanobots from the UN, but what if a higher power has decided otherwise?

Thought-provoking paradoxes abound in this latest addition to the Condition series. What have a small-town thug, an old pagan witch, and the return of a mysterious professor of neurological medicine got to do with the future of existence?

Ready to have not just your mind, but the multiverse, "corrected" too?

“Sarah’s given birth to a monkey?”

Amazing. I regret that I don’t have the words to describe how good these books are! They are complex and full of mystery and the imagination behind them is out of this world! The writing is brilliant and the narration is second to none. There is literally nothing to dislike and I’m really hoping there’s more to come from Alec! These books literally gripped me the moment I started listening and I couldn’t put them down; I think I’ll be able to listen to them over and over again and I’m looking forward to doing just that!
This is my honest opinion on a free review copy.

AUDIO BOOK REVIEW. Chemical symbology. Nanobots. The interworld. Parallel universes. Even though it had been a while since I read (with my ears) the prior books in this series, I was immediately drawn back in to the world when I heard the amazing narrator Jonathan Keeble announce the book's title. (Read any of my audio book reviews in this series for my fangirling gush over his voice. Perfection -- except for the American Southern accent, which I totally forgive.)

All the familiar characters are back -- some unexpectedly -- and we have the fascinating mix of science and witchcraft, with a dash of religion, and a plethora of skills and abilities that evolve with the characters: savants become super-savants, mentally deficient develop superior intellects, the wicked become... well, no spoilers here. Alec Birri gives readers the futuristic but with a healthy dose of the contemporary personalities that will most likely exist in perpetuity, like it or not. This grounds the story and makes it believable, possibly prescient at times.

“Ladies and gentlemen: welcome to the Kingdom of Heaven."

ALT TRUTH: BRAVE NEW WORLD takes readers on a trip through a history of what ifs, hope, catastrophe, and despair as the world unravels then reassembles itself and all is well -- oh, but it's NOT. The last quarter of the book entertains with a basic series of scientific posits and time jumps that show how even the slightest tweaks could result in huge consequences. At times, listening to this story felt like listening to a Neil deGrasse Tyson podcast. (Which is HIGH praise from me.) Mind blowing, but fiction. Hopefully...

Heavy read? Definitely. But the author deftly weaves a tale that you can't stop listening to --especially with Keeble's narration -- and Birri includes a handful of characters and their exploits that gives readers a chance to catch their collective breath and even have some comic relief. It's an excellent balance.

I highly recommend the five books in this series, starting at the beginning with CONDITION BOOK ONE: A MEDICAL MIRACLE?

This was a wild ride. I still have not gone back and picked up the first three books in this series, but I will get to them soon, and will likely revisit book 4 and this book. This had most of the elements that I enjoyed from book 4: magic, nanotech, AI, and gene-editing, but had twists to each. This also explored many thought provoking topics. I can't wait to start a reread, only this time getting to the first three books.

Disclaimer: I was given this free review copy audiobook at my request and have voluntarily left this review.