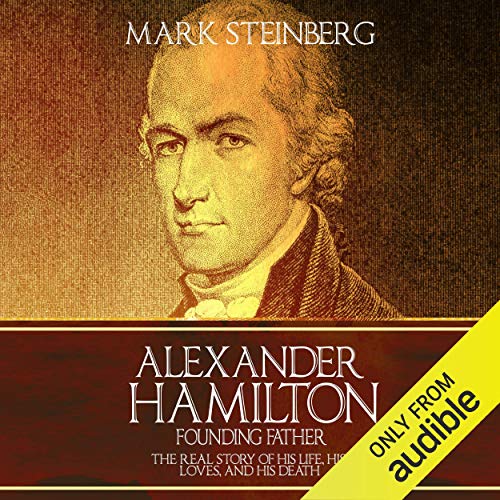 Alexander Hamilton: Founding Father is the story of one of America's great founding fathers, Alexander Hamilton. The book is a detailed account of this very important but controversial figure in American history. The story is a classic rags-to-riches one and begins with his childhood in the British West Indies.

Though his life was filled with tragedy and he was very poor, Hamilton managed to distinguish himself through his writing and his business skills. Eventually he left the West Indies and immigrated to North America, where he received a first-rate education. Later he became a hero in the Revolutionary War and was appointed to be General George Washington's right-hand man. Because of his service to Washington, Hamilton became the secretary of the treasury when Washington was elected president.

As a member of the new government, Hamilton made significant contributions, including setting up a banking system and a currency system that are still used today. He also played a major role in the ratification of the United States Constitution.

While Alexander Hamilton: Founding Father primarily focuses on Hamilton's great contributions, it also presents his dark side. Though Hamilton married a wealthy woman and became a member of the aristocracy, he was also involved in a scandalous affair and ultimately died in a duel defending his honor.

Short but informative introduction to Hamiltons life and career. Wish there was a longer biography of him on audible. Book well read and reader has pleasant voice although somewhat flawed by a slightly mechanical delivery..

I recently wrote a review of the 36 hour audiobook Alexander Hamilton by Ron Chernow. In this book of less than three hours author Mark Steinberg presents a superb summary of Chernow's biography of Hamilton. If one wants to learn a lot about this great founder of our republic but does not wish to devote 36 hours, I highly recommend this book. It is brief, concise, and offers an excellent summary of the main events discussed in great detain in Chernow's Hamilton biography.

Like any book this book is written based on the authors viewpoint and the data he collected to form that viewpoint. In the case of this book I struggled with how it's contents lined up with the contents of other books written about the timeframe in which Hamilton lived. The author chose his words and statements carefully to generate the picture he wants you to see which for me conflicted with what I had understood and read about the period of time our nation was forged. As always there are 2 sides to any discussion and I recommend readers search for other books from that period to get a full and accurate picture. I do appreciate this book as it has allowed me to create my picture/viewpoint of Hamilton.

Narrator was not easy to listen to. Content was repeated to often and not really in order. I would not recommend this book.

What would have made Alexander Hamilton - Founding Father better?

Would you be willing to try another one of Jim Johnston’s performances?

No matter how good this book is, or how well it's written, I absolutely detest the audiobook reader. The reader, who has a nice voice, except for the fact that he lisps, creating a whistling sort of noise, and over pronounces the letter s, especially at the end of words, which I know isn't his fault, is definitely in my lowest ten audio readers and as a result, I really struggled with this book.
Furthermore, the style of this book is rather conversational which is not a writing style that I am a strong lover of. The information however is good, which is why this book isn't a one star rating.

I really love these audible Stories. always a fan of world Heritage and history

Interesting history. It drags at times but a fascinating read. I strongly recommend this book.

I don't know if it's the narrator or the recording but the whistling S's by the narrator were extremely irritating. Other than that, it was a quick overview of a very interesting life story.