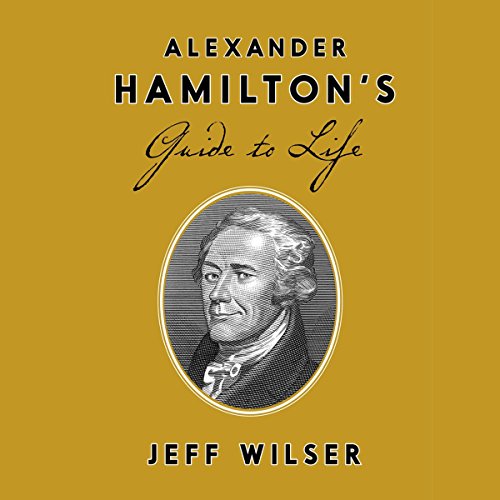 An entertaining look at the life and wisdom of Alexander Hamilton, the Founding Father who mastered the arts of war, wealth, wit, and women long before becoming the subject of the runaway Broadway hit Hamilton: An American Musical.

Two centuries after his death, Alexander Hamilton is shining once more under America's spotlight - and we need him now more than ever. Orphaned as a kid, this young, scrappy, and hungry self-starter came from nothing and then helped win the Revolutionary War, created the country's financial system, seduced New York's most eligible ladies, ratified the Constitution, and landed his face on our $10 bill. (In his spare time, he also formed the Coast Guard and the US Mint.) He is the ultimate underdog, blending a renegade spirit with a much-needed dose of sunny American optimism.

In Alexander Hamilton's Guide to Life, Jeff Wilser distills Hamilton's life and writings into lessons for anyone who wants a job, has a job, wants more money, is looking for love, or is preparing for a duel. Along the way, chapters ranging from "Self Improvement" and "Career Advancement" to "Money" and "Romance" reveal the ultimate dos (and don'ts) for sparking a revolution in your own life. Approachable, informative, and fun, this blend of advice, humor, and history will be the perfect gift for pop-culture and history lovers alike.

"Hamilton packed a lot into his short life. Jeff Wilser unpacks it and shows us how to make use of it. Hamilton rode horses and wrote with a quill pen, but he grappled with work, money, love, guts, and doing the right thing. Read, enjoy, learn." (Richard Brookhiser, author of Alexander Hamilton, American)
"Author Jeff Wilser has done his homework; he *gets* the real Alexander Hamilton, then he reveals the gems that guided his extraordinary life. Filled with levity and humor, and packaged in a concise, enjoyable format, the guide is very relevant to today's world and challenges. If you are interested in learning what made Hamilton successful, this book is for you... and for those you care about the most." (Rand Scholet, president and founder, The Alexander Hamilton Awareness Society)
"We raise a glass to Jeff Wilser on Alexander Hamilton's Guide to Life! It is as fun as it is informative. Wilser's writing articulately explains a very complicated man in a funny and relatable way. Whether your interest has been piqued by Hamilton the Musical, you've been a Hamilfan for years, or you just want to read something well-written and informative, you won't go wrong with this book." (Gillian Pensavalle and Bianca Soto of The Hamilcast: A Hamilton Podcast)

i loved this. it was my first audio book and i loved every second of it.

this was an excellent written book. I am amazed

this book surprised me and amazed me at how great Alexander Hamilton was. we live in his country

Interesting and Fun to Read

The author does a great job telling the story of Jefferson's life and how his principles still hold true today. The book is a great listen. It's easy to understand the importance of this great man. I highly recommend the book for anyone looking to learn more about this time in history. Comparisons and analysis related to the 21st century make it fun to read and relevant to the world today.

I enjoyed how the author told the story in a very unique way. it made it very entertaining

Mostly a Retell of Bits from other works

Very redundant and sites other works on Hamilton accordingly. Seemed and felt like piling on the Hamilton popularity and profiting from the recent abundance of attention to the subject. Nothing really new or overly enlightening. Probably a decent read for someone starting his or her Hamiltonian education but maybe not with it unless you have not read much on subject.

Enjoyed both Johnathan McClain's delivery and Jeff Wilser's telling of Alexander Hamilton's life story. Even my teenage/young adult children would love it!

I would listen to this a second and third time as I would not grow tired of it. very well written and humorous. I have become a huge fan.

Insight into the personality of Hamilton

I enjoy a lot of history books, and Alexander Hamilton's Guide to Life offered a light hearten listen about the personality of the man while still providing information on his many accomplishments.
The narrator was easy to listen to which permitted an extended listen session without losing track of where I was in the story.

This is not my first Hamilton biography. And it probably won't be my last. But it is the funniest, the most memorable, and hands-down the best narrated. (I really can't say enough good things about the narrator--great tone, tempo, emotion). The author has a way of turning all of these stories I feel like I've heard a million times before into something funny. He obviously both loves and gently ribs Hamilton. It's a great balance. I also love the elements of Hamiltons 5x great grandson put in the book as well. All in all A+!!!