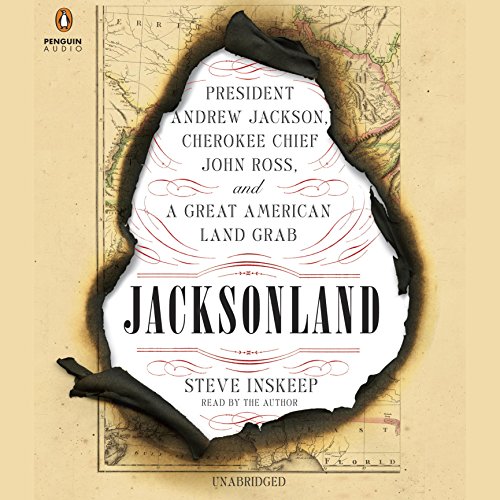 Jacksonland is the thrilling narrative history of two men - President Andrew Jackson and Cherokee chief John Ross - who led their respective nations at a crossroads of American history. Five decades after the Revolutionary War, the United States approached a constitutional crisis. At its center stood two former military comrades locked in a struggle that tested the boundaries of our fledgling democracy. Jacksonland is their story.

One man we recognize: Andrew Jackson - war hero, populist, and exemplar of the expanding South - whose first major initiative as president instigated the massive expulsion of Native Americans known as the Trail of Tears. The other is a half-forgotten figure: John Ross - a mixed-race Cherokee politician and diplomat - who used the United States' own legal system and democratic ideals to oppose Jackson. Representing one of the Five Civilized Tribes who had adopted the ways of white settlers - cultivating farms, publishing a newspaper in their own language, and sending children to school - Ross championed the tribes' cause all the way to the Supreme Court. He gained allies like Senator Henry Clay, Chief Justice John Marshall, and even Davy Crockett. In a fight that seems at once distant and familiar, Ross and his allies made their case in the media, committed civil disobedience, and benefited from the first mass political action by American women. Their struggle contained ominous overtures of later events like the Civil War and set the pattern for modern-day politics.

At stake in this struggle was the land of the Five Civilized Tribes. In shocking detail Jacksonland reveals how Jackson, as a general, extracted immense wealth from his own armies' conquest of native lands. Later, as president, Jackson set in motion the seizure of tens of millions of acres - "Jacksonland" - in today's Deep South.

"Surely everyone knows, or should know, about the Cherokee Trail of Tears - an ordeal imposed upon thousands of Cherokees, who, after fighting and winning a judgment in the Supreme Court against their removal from the Eastern Seaboard, were nonetheless dispossessed of their tribal lands and marched to Indian Territory in the early 1830s. The scale of the removal was staggering. Not only the Cherokee but also the Muskogee, Seminole, Chickasaw, Choctaw, Creek and many of their African-American slaves were removed in one of the largest and most brutal acts of aggression ever committed by the United States. But not till now, with the coming of NPR journalist Steve Inskeep's magnificent book, focusing as it does on the two key players - President Andrew Jackson and Cherokee Principal Chief John Ross - has this episode in American history been rendered in such personal detail and human touch.... The story of the Cherokee removal has been told many times, but never before has a single book given us such a sense of how it happened and what it meant, not only for Indians, but also for the future and soul of America." (Washington Post)

"Grounded in vivid primary sources, it is also a moving tale of leadership, betrayal and (violated) minority rights, culminating in the tragedies we know as Indian removal and the Trail of Tears.... Jacksonland successfully transports readers to an era when travel was slow and dangerous, racial and sectional divisions growing, and America very much a work in progress.... Inskeep writes with the urgency of a thriller, a cinematic eye and a consciousness that even history's apparent losers won occasional important battles." (Chicago Tribune)

"The narrative reads as if written by a watchful observer. It brings a part of history alive that is not usually discussed with this much depth." (Pittsburgh Post-Gazette)

What listeners say about Jacksonland

I am half Cherokee (with some Choctaw) and grew up knowing that Andrew Jackson was our historical nemesis and that my g.g.g. grandparents had been removed to our rez in Tahlequah OK. This book gave me so much greater insight and complicated my understanding of Jackson, Ross, and my own ancestors. I loved getting to listen to one of my favorite NPR voices as well-made an already fascinating and enraging story all the more engaging.

That the truth be told about the removal of the Cherokee and other native tribes from their ancient lands on the American continent is a noble goal of those of us left here after so much strife, struggle and conflict. I felt like I was walking a trail of tears as the author so deftly and authentically led the reader on this journey describing the path chosen by so many great men and women to stand up for what is right and just against the prevailing powers of the age. I cannot look at a $20 bill the same way ever again. Eventually we see men as they truly are when the truth is well told.

A compelling retailing of the Indian Removal and Forces behind it.

As a Oklahoman and Cherokee Citizen, at first I was not interested in one more story about the suffering of the sad American Indian. However, I feel the book told a fascinating story of the long intertwined lives of Ross, Ridge, and Jackson. The Native Americans in this story are Statesman and astute political adversaries to the land hunger Jackson and Southern White Americans. Even though you know how it ends, it is compelling to read how close Cherokees came to thwarting the Indian removal act.

We are still here - a story of persistance

A fascinating view of american expansionism and the relations with the indian citizens.
There is tragedy, but in the end, as a descendant notes, we must not forget those who made it. And celebrate that part of history too.

Not history but biased personal opinion

I was appalled that a well known journalist would mock and pillory Jackson with every mention of his name. This isn't history. There is no context presented for white settlement of the sacred hunting grounds of the Cherokee, Chickasaw, Creek etc. There is no explanation of decades of slaughter, brutality, and excessive violence on both sides leading to wave after wave of revenge killings. Even after Doublehead and a Cherokee delegation meet personally with President George Washington and signed a peace treaty, Cherokee attacks continued. Federal troops permitted the slaughter of seven Cherokee chiefs meeting with federal agents under a flag of truce. The men responsible for this heinous act were excused and never punished. This occurred time and again on the frontier called the Old Southwest. It had nothing to do with Jackson and pre dated his military service. If you want sensationalism and yellow journalism, this is your book. For actual history and an understanding of Indian issues and Jackson's interaction with native tribes look elsewhere.

I knew I didn't like Andrew Jackson before this book, but listening to the double dealing and unfair treatment shown native Americans, I really don't like him.

I learned so much about this era that Jackson's biography didn't tell me. The fact that the Cherokee had set up permanent settlements, and had adopted so much of the American lifestyle was totally new to me. The funny thing is, I live in Cherokee County GA and had no idea of that history.

The author's read was excellent. He was easy to listen to and mostly had good pronunciation. Except for Georgia place names where Native American and Spanish names are pronounced very "Southern".

Loved it! The best book on the subject, that I've found. Highly recommend this book.

great to learn about a little emphasized history

This period in this region is an important part of the history of indigenous Americans and how they fit into our nation's history. It seems that most other indigenous removal histories focus on the American West. The history in this book is so relevant to the original young soul of America. And it isn't just a flogging condemnation of that national soul. I found it inspiring to know how much political and popular opposition there was to this Injustice, and that respect for indigenous peoples was and is broadly held, even if the ultimate policies have often been unjust. If you defend minority rights, you follow in a long American tradition. Our failures are shameful, but hopefully this story and others like it cause us to redouble our efforts in the future.

Steve Inskeep, yeah, the guy from NPR's Morning Edition, does a great job telling the paralell stories of President Andrew Jackson and John Ross, the leader of the Cherokees. The narrative is a bit thin in the beginning but as the story gets more complex, Inskeep does a fantastic job laying out this time period. He does a wonderful job of detailing the importance of some minor figures who had great impact. He also does not make any 21st century judgements on the key players and leaves that up to the listener to parse. Its a great book if you want a broad introduction into this time period in the country and made me want to know more about John Ross and Major Ridge. Finally, anyone that reads this should feel fine about about Andrew Jackson being removed from the $20 bill. Its something that is long overdue.

A Fine Light on young America

What made the experience of listening to Jacksonland the most enjoyable?

It had an adoration that elevated the whole subject. Indians as well early Americans were treated humanely. Some of the history was brutal, but Steve Inskeep navigated it deftly.

What was one of the most memorable moments of Jacksonland?

I was drawn to politics, and Jackson and Henry Clay.

No, and a map may have helped me. I kept thinking of Lenard Skynard and Muscle Shoals.

I may have more empathy for the South after this.