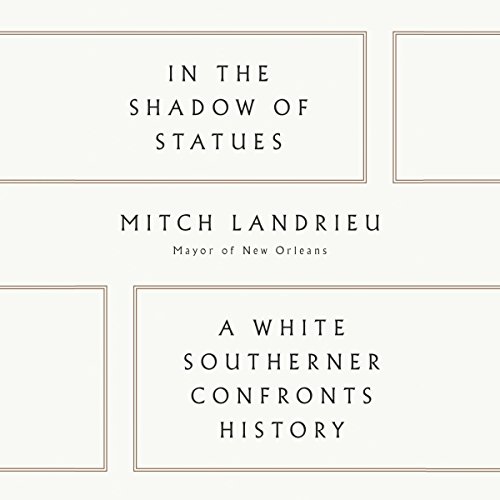 In the Shadow of Statues

"An extraordinarily powerful journey that is both political and personal.... An important book for everyone in America to read." (Walter Isaacson, number one New York Times best-selling author of Leonardo Da Vinci and Steve Jobs)

The New Orleans mayor who removed the Confederate statues confronts the racism that shapes us and argues for white America to reckon with its past. A passionate, personal, urgent audiobook from the man who sparked a national debate.

"There is a difference between remembrance of history and reverence for it." When Mitch Landrieu addressed the people of New Orleans in May 2017 about his decision to take down four Confederate monuments, including the statue of Robert E. Lee, he struck a nerve nationally, and his speech has now been heard or seen by millions across the country. In his first book, Mayor Landrieu discusses his personal journey on race as well as the path he took to making the decision to remove the monuments, tackles the broader history of slavery, race and institutional inequities that still bedevil America, and traces his personal relationship to this history. His father, as state legislator and mayor, was a huge force in the integration of New Orleans in the 1960s and 1970s. Landrieu grew up with a progressive education in one of the nation's most racially divided cities, but even he had to relearn Southern history as it really happened.

Equal parts unblinking memoir, history, and prescription for finally confronting America's most painful legacy, In the Shadow of Statues will contribute strongly to the national conversation about race in the age of Donald Trump, at a time when racism is resurgent with seemingly tacit approval from the highest levels of government and when too many Americans have a misplaced nostalgia for a time and place that never existed.

Featured in Newsweek's "50 Coolest Books to Read This Summer"

“[Mitch Landrieu] has done something, in his speech and his book, that other politicians should emulate. He’s tried to reckon with America’s sins while offering an optimistic, big-hearted and deeply patriotic defense of cosmopolitanism as the source of American greatness.” (The New York Times)

“[A] thought-provoking piece of political writing...Uncomfortable as it might be to think of our country’s history...we have to do so, if we want to live within the truth. Landrieu has shown the way.” (The Washington Post)

What listeners say about In the Shadow of Statues

Learned a huge amount about the damage casual and institutionalsed racism causes. A deep and real look at Contemporary politics in the US.

Everyone should read this

After hearing Mayor Landrieu’s speech at the occasion of the removal of Confederate statues in May 2017, I knew I wanted to hear more of his story. He speaks and writes very logically and effectively to help us understand what has been an emotionally charged question for some people.
Although I am often tempted to see this issue as “not my problem”, the book makes it clear that we all need to understand the true history and meaning of these memorials as well as how we can take other the steps that can be taken to make our cities more open and successful.
His story as a second generation mayor coming from a working class background is inspiring. I’d like to hear more stories like his and I would also like to hear more from him...or more like him...his intelligence and bravery are needed in our country.
An excellent plus in the audio book is a recording of his “Monuments” speech.

What made the experience of listening to In the Shadow of Statues the most enjoyable?

An honest conversation about race, racial oppression and systemic racism is long overdue in our country. In this book, Mitch Landrieu has taken a courageous stand in the hopes of moving us in the right direction. His book is well researched and yet very personal. He does an excellent job narrating. I strongly recommend this book for anyone who cares about creating a more inclusive, respectful and just society. He speaks to the better angels of our nature.

This is a must read for every American

I’m 30 years old and I’d consider myself an avid reader-this is not hyperbole when I say this might be the best book I’ve ever read. ‘In the Shadow of Statues’ should be taught in every public school in America. Mitch Landrieu has a perspective that translates to the entire country, not just his native New Orleans. My hope is Mitch Landrieu becomes a figure in our national politics because we desperately need someone with this type of love and compassion.

Let the Truth Be Told

Racism has no place in America or anywhere in the world. Mitch’s memoir acts as a mirror held up to America’s Southerns and ultimately all Americans. Wonderfully written as a tale of overcoming bigotry and hatred in the hostile territory of New Orleans politics. Well worth the Audible credit.

Why didn’t I know?

I LOVED hearing Mitch’s story and some of the history of New Orleans. I’m a white woman from California, married to a black man, living in Virginia. While there are a many beautiful people and places here on the east coast and in the south, I’ve always worried about visiting and have told my boys I would not want them to attend school anywhere in the south. This book has changed my attitude entirely. I can’t wait to make a trip to NOLO, and hope to meet ML one day. read this book!

What can I say? Mayor Landrieu inspires with this recounting. He eloquently illuminates the reality of the traitorous and inhumane history of the Confederate lost cause.

What a great book. Refreshing to see that race and social justice efforts aren’t left on the shoulders of black and brown people, but confronted head on by a ‘white southern’

Loved the quality of narration by the author himself. Gives good insights into the history and the struggles Mitch had to go through to fight for the cause.

This book tells you why the monuments were taken down.

While walking through the French Quarter in the Spring of 2019, I saw an artistic photo of Lee on his pedestal in Lee Circle, and I was transfixed.

Why was he removed?Fortunately, Google did its job, and within minutes I found this audio book by the man who actually made the call to remove not just Lee’s statue, but three other Confederate statues including an obelisk which I had no idea had any confederate connection.

Now, make no mistake, this is a political resume for Mitch Landrieu, like so many other books by presidential hopefuls. And the first half of the book was somewhat underwhelming.

But if you stick with the book, you will hear thoroughly enthralling stories about David Duke and Katrina from the eyes of a true Louisiana insider. Regardless of your party affiliation, these are good stories.

The climax of this story is the dismantling of the statues.

Before I go on, I want to say that I am a social conservative. So I hope this gives you some reassurance.

You will definitely want to hear the about the process of getting these statues removed. The sheer logistical, political, and emotional challenges are staggering.

In the end, this book does a good job of guiding a moral discussion about the defining moral issue of this country. Mitch Landrieu does not portray himself as some sort of a morally superior, but he explains his rational and thought process in a very humbling manner.

In summary, I am not a Democrat, but I enthusiastically recommend this book without any reservation whatsoever. Regardless of how you identify politically, this is a story about a man who made a sound moral decision that came with huge political consequence.

Great insight into American history and politics woven through the story of one city. Inspiring.