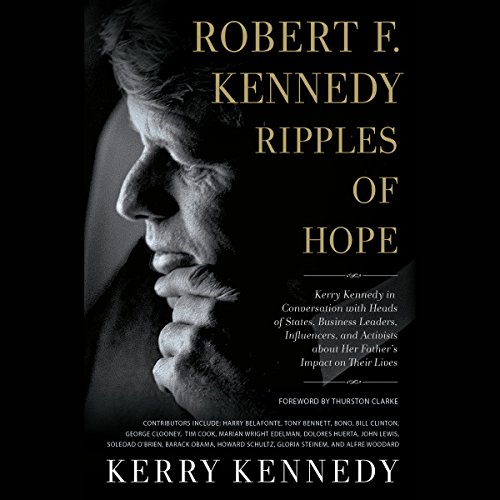 Kerry Kennedy, daughter of Robert F. Kennedy, shares personal remembrances of her father and through interviews with politicians, media personalities, celebrities and leaders, explores the influence that he continues to have on the issues at the heart of America's identity.

Robert F. Kennedy staunchly advocated for civil rights, education, justice, and peace; his message transcended race, class, and creed, resonating deeply within and across America. He was the leading candidate for the Democratic nomination for the presidency and was expected to run against Republican Richard Nixon in the 1968 presidential election, following in the footsteps of his late brother John F. Kennedy to become president. After winning the California presidential primary on June 5, 1968, Robert Kennedy was shot, and he died the following day. He was 42.

Fifty years after his assassination, Robert Kennedy's passions and concerns and the issues he championed are - for better and worse - still so relevant. Ripples of Hope explores Robert F. Kennedy's influence on issues at the heart of America's identity today, including moral courage, economic and social justice, the role of government, international relations, youth, violence, and support for minority groups, among other salient topics.

Ripples of Hope captures the legacy of former Senator and US Attorney General Robert F. Kennedy through commentary from his daughter, as well as interviews with dozens of prominent national and international figures who have been inspired by him. They include Barack Obama, John Lewis, Marian Wright Edelman, Alfre Woodard, Harry Belafonte Jr., Bono, George Clooney, Gloria Steinem, and more. They share personal accounts and stories of how Kennedy's words, life, and values have influenced their lives, choices, and actions. Through these interviews, Kerry Kennedy aims to enlighten people anew about her father's legacy and to bring to life RFK's values and passions, using as milestones the end of his last campaign and a life that was cut off much too soon.

Thurston Clarke provides a powerful foreword to the book with his previous reporting on RFK's funeral train.

What listeners say about Robert F. Kennedy: Ripples of Hope

From a daily drip of despair to remember ‘Ripples of Hope’

I suspect like many fellow citizens, Hope has felt in short supply of late.
This Audible book, more powerfully than any of the dozens I have read (heard) had me at the foreword. The moral courage, evidenced by RFK and continuing by Kerry, is impactful and can be contagious.
I grew up in a ‘political family’, too. My Father played a significant behind the scenes; but, real role in JFK election. I had my own bags packed to join the Advance Team with Jerry Bruno for New York Primary the next day after CA Primary.
Not unlike Kerry’s recollections and others, there was a sense of admirable purpose to Public Life, then; not ‘Spin’ or ‘narrative’ or ‘our partisan brand’; but real activity focused on making the lives of our fellow Americans better. This important collection reminds me ( and all of us....remember “us” as Americans, when we were ‘in this together’). Thus is why Kerry has done a profound service. The best of the Kennedy Family contributions to our country. MUST read to remind us who we really are. Thank you!!!

Everyone on the Planet

It is rare for a book to meet so many goals. Tributes stories rememberances well done. But also inspiration for the next New generation of people not just Americans. For all of us.

I know that I and so very many other Americans remember the time of JFK & RFK. Bobby Kennedy kept the Country going after His Brother was murdered by Texans in Dallas.
The Book reminds us of The Hope, The Dreams for our Country and the Altruistic Bobby. We All Cried and we’re in such disbelief. And in California! Sir Han Sir Han will never see the Outside of a cell. As it should be. If you have such love and devotion as I for the Kennedy’s. Listen to his daughter Kerry talk about how it was then. It will make you yearn for the days. They would want us to take our Country back. And so far so good! My fondest Dreams of Jackie, JFK, Bobbie and Ethel and their children brought tears. And it ended any Hope Americans ever had for the Dream of The Best, Altruistic, and constant fight for The People, The Kennedy’s are Our Royal Family.

Another Ripple of Hope.

A glimpse into the lives RFK touched and his ongoing legacy. As a teacher at the RFK Community Schools it is a great story to share with my Students.

Very little said about RFK. The book is a tool to get liberal opinions out. One sided unfortunately. Disappointed.