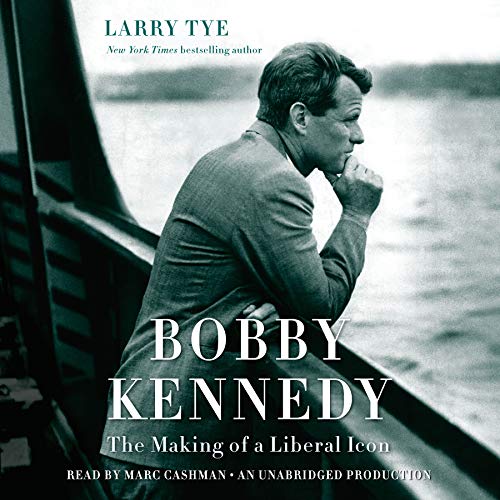 From the New York Times best-selling author of Satchel comes an in-depth, vibrant, and measured biography of the most complex and controversial member of the Kennedy family.

History remembers Robert F. Kennedy as a racial healer, a tribune for the poor, and the last progressive knight of a bygone era of American politics. But Kennedy's enshrinement in the liberal pantheon was actually the final stage of a journey that had its beginnings in the conservative 1950s. In Bobby Kennedy, Larry Tye peels away layers of myth and misconception to paint a complete portrait of this singularly fascinating figure.

To capture the full arc of his subject's life, Tye drew on unpublished memoirs, unreleased government files, and 58 boxes of papers that had been under lock and key for the past 40 years. He conducted hundreds of interviews with RFK intimates - including Bobby's widow, Ethel; his sister, Jean; and his aide, John Siegenthaler - many of whom have never spoken to another biographer. Tye's determination to sift through the tangle of often contradictory opinions means that Bobby Kennedy will stand as the definitive one-volume biography of a man much beloved - but just as often misunderstood.

Bobby Kennedy's transformation from cold warrior to fiery liberal is a profoundly moving personal story that also offers a lens onto two of the most chaotic and confounding decades of 20th-century American history. The first half of RFK's career underlines what the country was like in the era of Eisenhower while his last years as a champion of the underclass reflect the seismic shifts wrought by the 1960s. Nurtured on the rightist orthodoxies of his dynasty-building father, Bobby Kennedy began his public life as counsel to the red-baiting senator Joseph McCarthy. He ended it with a noble campaign to unite working-class Whites with poor Blacks and Latinos in an electoral coalition that seemed poised to redraw the face of presidential politics. Along the way he turned up at the center of every event that mattered, from the Bay of Pigs and the Cuban Missile Crisis to race riots and Vietnam.

Bare-knuckle operative, cynical White House insider, romantic visionary - Bobby Kennedy was all of these things at one time or another, and each of these aspects of his personality emerges in this powerful and perceptive new biography.

"This is not just another Bobby Kennedy book. It is the definitive biography of one of America's most compelling political figures. Larry Tye has given us the complete Bobby, from the Bad (Early) Kennedy, from Joe McCarthy's committee counsel to 'ruthless' political manager to gentle, softhearted presidential candidate. Tye's book rests on prodigious and original research including rare, on-the-record interviews with Bobby's widow, Ethel, who confesses that seeing Bobby for the first time was like meeting George Clooney." (Roger Mudd, winner of the Peabody Award and former coanchor of NBC Nightly News)

"Robert Kennedy led one of the great unfinished lives in American history. With skill and verve, Larry Tye has written a fascinating account of a transformative figure who continues to summon us to heed our better angels even all these years distant." (Jon Meacham, Pulitzer Prize-winning author of Thomas Jefferson: The Art of Power)

"Drawing on the personal papers and insights of the Kennedy family, this biography will appeal not only to those wanting a portrait of a dynamic idealist, but also to those seeking to understand the emotions of the times in which he lived." (Henry A. Kissinger)

What listeners say about Bobby Kennedy

A wonderful story of an important life

Highly engaging and very well researched biography. Deconstructs the complex background and political evolution of RFK whole including enough humour and first person detail to make you feel you know him. Great narration - I can not recommend this book too much to anyone interested in the 1960s world stage or looking for the definitive RFK biography.

This is a long listen, but it never gets bogged down or boring, such is the subject matter and the 100% perfect narration.

I'll declare an interest as a big fan of Bobby, however for anyone interested in modern history, this book is essential listening.

This is not a book that fawns over Bobby and his family, but it still manages to project the Kennedy Magic and the inevitable emotion attached.

How could a man such as Bobby, with all his faults and privilege, become such an enduring icon for people all over the world and from across the political spectrum, perhaps even surpassing his brother....get this book and find out. Unmissable.

A thoroughly honest factual account written comprehensively and without bias. A must read for those of you who like me only knew Bobby in smatterings

Well researched and written. Delivery of speaker is excellent.
A good balance of all areas of RFKs life covered .

Just wished they focused a little more on who the shooter was and his trial and subsequent outcome.

This book sat on my “to read list” as I tried to decide whether to read it or not. I just finish reading “Joseph McCarthy” by Arthur Herman and that triggered me to go ahead and read the book as Herman mentioned RFK frequently throughout the book.

Tye does a good job capturing the contradictions of RFK. Tye depicts Kennedy’s transformation from a ruthless, arrogant, hypocritical man to a loyal, compassionate, dedicated man who changed the country. Tye states that Bobby was a conservative and he wanted to show how he changed into a liberal. The author starts with RFK’s association with Joseph McCarthy and ends with the assassination. Tye goes into depth about the relationship with Lyndon Johnson and his pursuit of Jimmy Hoffa. He follows RFK’s commitment to civil rights and his interest in the problems of poverty. He covers the relationship with his brother, John F. Kennedy, and his role as Attorney General. He also goes into details about his campaign for president.

The book is well written and meticulously researched. Tye not only searched the usual archives but conducts countless interviews with colleagues, friends, family and his widow. Tye is a journalist and he writes with the style of a reporter. I enjoyed the book, learned some new information and refreshed old knowledge.

March Cashman did a good job narrating the book. Cashman is a voice-over artist and award winning audiobook narrator.

This should be the hands-down definitive biography of Robert Kennedy. There are no glib smooth-overs of the RFK's early and ugly zeal and flaws. This is the story of a man who through terrible despair, grief and unusual determination becomes 100 times the man he started out being. The political reality of his time is rendered perfectly. The book resounds because it is a true rendering of human frailty, suffering and overcoming. Life's first card dealt Bobby Kennedy was filled with feisty competitiveness and intolerance. Turned over at the end of his his life, the card showed a depth of character found only in monks and profoundly selfless leaders. To be savored by conservatives and progressives alike. And brought this reader to tears 45 years after spending 19 hours in his funeral line, for what might have been.

I was initially taken back by a poor review I encountered on audible. The book is well written and the production is top notch. If you are curious about Bobby Kennedy, I'd recommend this book without hesitation.

I brought this audio book to understand the Kennedy legend from JFK's brother Bobby Kennedy's point of view, one whose news of death I had to convey to my grandfather, one of millions of Indians that admired the Kennedy's in India, while I was only 5.

The book, expertly narrated, not only brought alive the Kennedy legend but also the era at the time and the private and public victories and missteps of the father, brothers, and wives in a vivid manner.

I could not put this book down, sort of, as I only get about a half hour of free time to listen to it, but I heard them on contiguous days and thoroughly enjoyed every chapter of their challenges with Cuba, the Russians, the MLK led black rights movement, his devotion to his extended family especially his father, the JFK assassination, Bobby's ensuing dark period while still carrying on his familial responsibilities especially toward Jackie and her kids followed by his reappearance into the political world and his tussle with LBJ, and his love affair with the American public and tussle with Jimmy Hoffa and his political opponents while running for the Senate and finally succumbing himself to an assassins bullet while being an earshot of the Presidency himself.

Fabulous listen all round.

This was such a helpful read to understand the Kennedys and Robert Kennedy for the first time by going deeper into his life beyond the documentaries on TV.

Wonderful biography of a complex man his time

Loved this book-fair to its subject
Much can be learned now from what happened then.
RFK was right—we can do better
Larry Tye clearly shows us what was and opines in what might have been

I’m not as drawn to biographies as others might be, but Larry Tye’s bio of Bobby Kennedy proved to be a wonderful choice. Even handed, shows aspects of Bobby that those from the left and those from the right sometimes sweep under the rug. Well done narration as well.

Excellent book. It surprised me.

One of the best books I have read about a politician. The author doesn’t hide Bobby Kennedy’s mistakes or misbehavior but certainly shows his strengths, being the most notorious in the book his capacity to learn and change. I always considered Bobby Kennedy as the irascible Attorney General, but what a surprise. The man really learned and changed. The book is written with a profound psychological insight, showing the souls of the involved persons.

What a complicated man!

I learned a great deal about a man I was taught by my father to hate when I was growing up and grew to admire in my adulthood. RFK was too multi-dimensional to look at so simplistically. Well-written and narrated.

Larry's writing captured both the brilliance and ruthlessness of Bobby Kennedy. Beginning early in his life, I was continually locked in learning all the complexities that made up RFK. Although we knew the ending, I learned much more intimately at the brilliance that made up this liberal icon.