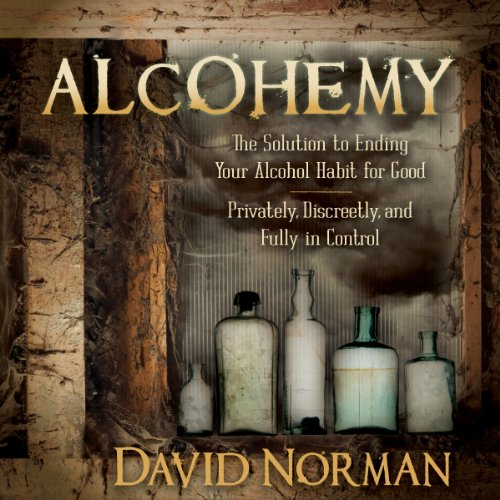 The Solution to Ending Your Alcohol Habit for Good - Privately, Discreetly, and Fully in Control
By: David Norman
Narrated by: Tim Budas
Length: 7 hrs and 25 mins
Categories: Health & Personal Development, General
4 out of 5 stars 3.8 (4 ratings)

"It's happened again! What did I do last night? I can't remember. Jeez, I hope I didn't do or say anything to embarrass myself or my wife. Think, man, think! Bloody hell, I hate it when I drink too much and can't remember what's happened. I can't keep doing this to myself...or her. But what the hell do I do? I don't believe I could ever stop drinking completely."

For many years, this is how David used to wake up in the morning. After a harsh upbringing on a remote Australian cattle property, David turned to alcohol at an early age in an attempt to replace the emptiness he felt and to simply "feel good". After many desperate years of failed attempts to moderate and manage his drinking habit, David reached his tipping point. He was too proud and embarrassed to seek public help, so he used his own analytical skills to search within for the ultimate solution.

The result is his hugely successful 13-element Alcohemy process, which completely and permanently changed the way he viewed alcohol. This process changes behavior from the inside out and asks the question why any of us drink alcohol at all, as many of us are alcohol dependent without realizing it. Alcohemy takes an in-depth look at the "Why, How, and Belief" factors of alcohol dependency. It prepares you well for an alcohol-free life by systematically examining your upbringing, values, benefits versus consequences, desires versus fears, old versus new actions, and dealing with unhelpful friends.

Listening to this book, with its personal insight and linkable reasoning , has been a fantastic experience.

I don’t think I will tire of listening to it.

listening to this book wasn't exactly a waste of time, but personally, I didn't get a lot out of it. However, I really don't think I was in the right demographic for it. As a female, fairly moderate drinker (at this point) who is getting concerned about a creeping level of alcohol consumption, I didn't really identify with this writer and the stories and advice that were given. I connected more with Caroline Knapp's 'Drinking, a Love Story'.

Would you recommend Alcohemy to your friends? Why or why not?

Sure, I think there's an audience for it - I'd recommend it to guys who really want to stop drinking and who feel reluctant for whatever reason to do the AA thing. The writer was clearly no scholar, as it was very 'plainly' written. In that sense I think that it makes it accessible to some folks who might be put off by more academic tomes, and who might prefer to trust the advice of the-guy-next-door who has been in a bad place and who wants to share the method he devised to pull himself out of it. For me, I like the reassurance of knowing that the information and advice has come from peer-reviewed research etc, and this book really didn't have that. My interpretation of the book wavered variously between unprofessional, generously honest, boring, and feeling kind of sad that he has felt compelled to share some very personal experiences with the world.

Who would you have cast as narrator instead of Tim Budas?

Anyone!! This was the one major thing that I had problems with. While I think it was appropriate to have an Aussie to narrate this book (I'm an Aussie myself), his reading style was extremely off-putting. It was very halting and stilted in its delivery, meaning that after every (pause) couple of (pause) words (pause) there would be a (pause) meaningless pause! It made the reading seem kind of patched together, like you hear in announcements at the railway station or on the train, where the message is constructed of pre-recorded station names and information. The dialogue just didn't flow properly and I kept getting distracted by it, and it just came off as being amateurish.

no - it would be too cringeworthy.

ladies, go for the female writers if you want to connect to someone who's gone through a drinking struggle and has come out the other side.

Awesome. A clear path to live my awesome life

Just finished the full listen. Wish I had months ago. Now I get it. I see the well planned out path, the support and my belief in my success is certainly stronger. Now to follow the Elements to self discovery that are so mindfully placed before me. I can't thank David enough for revealing his soul thru the telling of his story and building this comprehensive road to uncovering the lost, radiant and always present me.
Val

This book can change your life around!

Where does Alcohemy rank among all the audiobooks you’ve listened to so far?

I have read a number of books on how to break an alcohol addiction, but none so carefully planned as the 13 elements in this book. It slowly shows you how to change your mindset on alcohol - change you from the 'inside out.'

I would highly recommend the book to anyone struggling with alcohol - or as a gift to a loved one that deep down knows they need help, but just don't know where to turn.