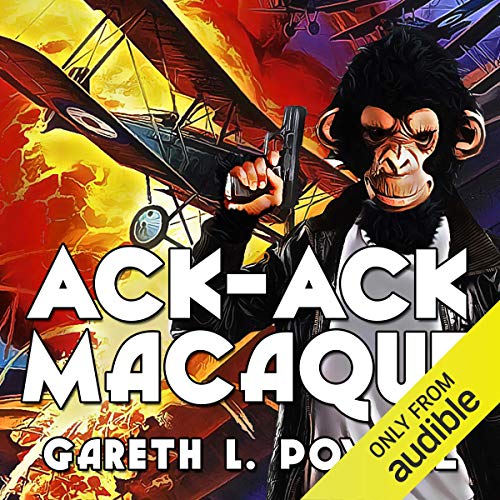 By: Gareth Powell
Narrated by: Richard Burnip
Try for £0.00

In 1944, as waves of German ninjas parachute into Kent, Britain's best hopes for victory lie with a Spitfire pilot codenamed Ack-Ack Macaque. The trouble is, Ack-Ack Macaque is a cynical, one-eyed, cigar-chomping monkey, and he's starting to doubt everything, including his own existence.

A century later, in a world where France and Great Britain merged in the late 1950s and nuclear-powered Zeppelins circle the globe, ex-journalist Victoria Valois finds herself drawn into a deadly game of cat and mouse with the man who butchered her husband and stole her electronic soul.

Meanwhile, in Paris, after taking part in an illegal break-in at a research laboratory, the heir to the British throne goes on the run. And all the while, the doomsday clock ticks towards Armageddon.

Winner of the British Science Fiction Award for Best Novel.

What listeners say about Ack-Ack Macaque

An ok book, good to listen to on the bus but no more than that. The narration was ok although didn't love some of the voice choices too much. and the last chapter is the first one of the next book, which I didn't bother listening to which probably says all you need to know.

Would you try another book written by Gareth Powell or narrated by Richard Burnip?

Tried "Ack-Ack Macaque" as a filler in a 2-4-1 offer and was not gripped by the Gareth Powell writing - perhaps there should be plot comparitor and originalty ratings.Narrotor Richard Burnip does a good job of the various characters.

What was one of the most memorable moments of Ack-Ack Macaque?

An early scene before we know who is seeing what thought who's eyes.

Just reading with enough difference in accent that it was obvious which character he was voicing but not cringe worthy/dis-jointed - considering the plot.

No, not really, won't be selecting the follow up book.