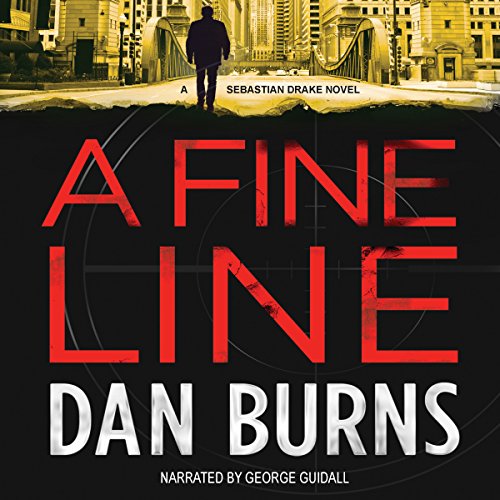 When a struggling author with a secret government past is hired by a wealthy philanthropist to investigate a cold murder case, he has no choice but to expose the dark and buried secrets of a powerful political family in Chicago.

Sebastian Drake is a novelist, working out of a dilapidated apartment in the city, who’s trying to come up with his next story idea. But he’s stuck.

Drake receives an unexpected visit from a man interested in hiring him for a project and who thinks he has just the solution to Drake’s writing challenges. He also thinks that Drake’s past and secret life with a shadow government organization is a valuable asset. His proposition to Drake is simple: become a hired agent to investigate a cold murder case involving one of Chicago’s most powerful political families. The job comes with a decent paycheck, all the support he might need, and the types of real life experiences that can form the basis for great fiction stories.

This is a story about a man with a new lease on life, who leads a dual existence. Behind his desk, he is an aspiring author. On the streets, he is a rogue undercover and unknown vigilante.

His biggest challenge is keeping intact the fine line between reality and fiction.

What listeners say about A Fine Line

This book was great, i listened to it in no time and the only complaint is that's it wasn't longer.

Full of mystery and twists with characters brought to life with excellent narration.

Bring on the next one.

The story is about a cold case of murder. This book is well written and well narrated for audiobook. It will kept anybody guessing until the end of the book.

The story is about a cold case of murder. This book is well written and well narrated for audiobook. It will kept anybody guessing until the end of the book.

This story revolves around a writer name Sebastian Drake who has writer's block. He is an ex-journalist and also has a secret past which has been wiped from the records. His agent is breathing down his neck for the next book and Drake is making no progress. Then he gets a visit from a mysterious man offering him a job of investigating a 10-year-old cold case murder. Drake isn't really interested at first, but he's offered good money and when he learns more about the case, decides to take the job. The murdered young woman belonged to a wealthy and powerful family, and the only part of her body ever found was her hand which had been put on display in a prominent park.
As Drake's investigation continues, the stakes get higher and become personal to him.

At first I wasn't sure I liked Drake, he seemed very cold and to be honest, it was quite a while into the book before I got used to him. I wouldn't say I ended the book liking the main character, but I felt the story did delve into his past to explain why he acted the way he did.
The pace moved along fine. The investigation and characters were interesting, keeping the reader/listener motivated to find out what happened next and also as to whom the murderer would turn out to be.

I was listening to the audiobook and the narrator did a good job. The voice for Drake seemed to fit with the character. I did speed the audio up a little though as it seemed slow in places. I give this a solid 4 stars and would certainly read/listen to another title by this author.

Excellent Start to a New Series!!!!

I loved this book by Dan Burns, this is my first time to ever hear of him. George Guidall has the PERFECT voice for Sebastian Drake, the protagonist in this book.
This is a fast paced story with a very unique character. The protagonist is tough as grit ex CIA who has moved on in his life. Working at being an author he's accepted a job as a private investigator on a cold murder case from 10 years ago. Meanwhile his publishing agent has gotten him a contract but there's a catch... he has five weeks to complete his book. It's not even near completion. The closer Drake gets to the truth about the murder the more dangerous things become. Not only for Drake but for those around him. When a woman he has just started seeing is murdered he thinks it may have something to do with him and his investigation. But then bad gets worse.
I couldn't put this down and can't wait for the next installment!
This book has my HIGHEST RECOMMENDATION!
If you found this review helpful please indicate so.
Thank You.

Of course, I have to admit that I love George Guidall's narration -- so it was a no brainer that I would buy this book. To my delight, it was a great story -- unique in terms of the angle and very good at hiding the upcoming twists and turns. Sebastion Drake, it seems, has a storied past and when his daughter is at risk, he summons it. I enjoyed the story -- a broke novelist without an idea, a drunkard, and somehow, he conquers all. Not a fairytale, but a nice, engaging good guy-bad guy duel.

It's getting hard to find good staff nowadays.

Sebastian Drake is getting pretty close to rock bottom. An author of three good selling books, for months he's been unable to write anything beside, 'A novel, Title to be decided.' He is running out of money, owes rent on his dilapdated apartment and alimony to his recently divorced wife and daughters, and he drinks. A lot. All day.
Then a visitor calls, someone he doesn't know. He wants to offer Drake a job, using his past journalism experience to look into the ten years old unsolved murder of a young woman who was to have married the visitor's son who died just after whilst on active service. Reluctantly, Drake agrees - five thousand dollars a week is a lot of cash. Especially when you're broke.

Well written, this is a fast action story of a cold case investigation, old memories and new beginnings. The author even gets to write his book. The main protagonist are well characterized, given backgrounds as well as current appearances and personalities.
And this already great read is further enhanced by the narration. George Guidall has the slightly gruff voice perfect for the tale teller of this story. His pacing is good, intonation and expression excellent. He also voices each character individually and appropriately, breathing life into their dialogue. A fine performance.

So, interesting story, well written, good characterisation and excellent narration, this is a most enjoyable book which holds the listener to the end.
My thanks to the rights holder who gifted me a complimentary copy of, A Fine Line, at my request, via Audiobook Boom. It is a book I would recommend to anyone with a liking for mystery thrillers and quirky investigators. This one will not disappoint.

Listened to it in 1 sitting! Captivated me throughout. Well written. Would compare him to David Baldacci.

Well, the ending just totally surprised me! I don’t want to give it away, so just read it for yourself. I really like Dan Burn’s style. I especially like his newest book, “GRACE.”

A reasonably well rounded if somewhat

A reasonably well rounded if somewhat transparent tale. Disolving shell casings aside, character and plot development was credible and the expert narration of George Guidall is always welcome to my ears. I believe author Dan Burns has potential to grow and develop his talents as a writer and will consider another in this series to gauge his progress in this direction. I would put this book around the top of the second tier in my library.

Only thing good is the narrator

Looks like I finally did it...bought a book just because Guidal narrated it! Story line could have lead to great book but book is Judy full of one liners, no depth of characters. Not good

Looking forward to "Drakes" next adventure!

Where does A Fine Line rank among all the audiobooks you’ve listened to so far?

Great story line, couldn't stop listening to it! The narration was awesome!

I really enjoyed this fast paced story! I was hooked from the start and couldn't stop listening. Well written and fantastic narration!


I was given this free review copy audiobook at my request and have voluntarily left this review. The fact that I was gifted this book had no influence over my opinion of it

I was pulled into this book from the very beginning. I loved the narrator on this book and thought he was top notch. This book is full of twists and turns, action and imagery. I requested this review copy audiobook and have voluntarily written this review. The author was new to me. while I have listened to George Guidall before. I will definitely listen to more books by both! Dan Burns did an awesome job with this story and I hope to listen to more books of Sebastian Drake.