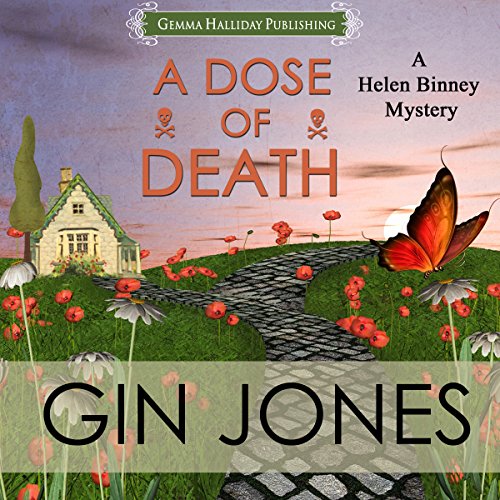 A Dose of Death

As the former governor's wife, Helen Binney is used to being in charge. So when illness and two pushy nieces force her to take on a visiting nurse, Helen uses every trick in the book to slip away from the annoying woman. Only someone must have disliked the nurse even more than Helen, because the woman's dead body shows up the next day in Helen's yard! Now it's up to Helen to prove that not only is she perfectly capable of taking care of herself, she's also perfectly capable of solving one cold-blooded murder. Between the nurse's shady past, an elusive "Remote Control Burglar", and an unlikely partnership with a handsome lawyer, Helen finds herself being drawn into the killer's carefully crafted web. The only question is, can Helen survive a little dose of death?

What listeners say about A Dose of Death

Would you try another book written by Gin Jones or narrated by Lisa Valdini?

No I wouldn't, the author's characters and writing style were too annoying for me. And the reader's slightly slow monotonous time did not help.

Would you ever listen to anything by Gin Jones again?

I tried to ignore the lack of different voices for the characters (apart from the murder victim before she was murdered), and the slow speed of narration, but was a contributing factor to giving up early.

What character would you cut from A Dose of Death?

I did not like any of them, so would not make a difference.

Dislikable main character. Continual references to her Lupus, her pain, her disability. Her daughters were worried about her not coping on her own, but after murder in her garden they were not immediately particularly concerned. Helen is not shocked, upset, horrified or react as a real person would who just found a bloody body. Most infuriatingly she does not behave as an ex Governors/politicians wife would. As a state's First Lady for a very long time she would not be so naive and wet. Totally unbelievable that she allows the nurse Melissa to talk to her like that, or take her phone. Lost all credibility at that point. The police were not interested in taking her statement when she found the body. Although published in 2014, the 45 year old Helen doesn't think to look on line for newspaper articles to research burglaries, the lawyer hastily suggest it to her. Had to keep reminding myself she was only 45, not 85 as she was portrayed as so much older.
I have only ever given up on a couple of books in all my years in Audible, and this was one of them...so I cannot comment on anything more than the half a book I listened to. Sorry, but definitely not something I enjoyed or would recommend.

Helen returns to her cottage in the woods when illness disables her. If she could just get people to leave her alone life would be great a remote control thief, an abusive nurse and murder keep her in the middle of life action. Voice a bit irritating. Recommend.

This is a nice cozy mystery that kicks off a series. Helen Binney is the retired ex-wife of the governor, who just wants to be left alone in her cottage. She has lupus and two well-meaning, meddling nieces, who insist that she can't take care of herself. As an introvert myself, I really felt sympathy for the heroine, as truly, it seemed that nearly everyone ignored everything she said. It was extremely frustrating. I appreciated that she fought back. I think the book really highlights how people will do things out of love for others that are not only not helpful but intrusive and belittling. Hopefully, it will modify some listeners actions.

Back to the story, the nurse that is foisted upon Helen eventually turns up dead. (Hooray!) The story really takes off from here. With the help of a retired lawyer, a driver, and 2 ladies, who are somewhat trapped in a nursing home, Helen is able to solve a few of the mysteries in the little town. Although, one or two of them seemed more like a lucky guess than brilliant deduction.

The story was fun and the characters enjoyable. I plan on reading/listening to more in the series.

The narrator did a good job. I could easily identify each of the characters. She gives some style to some of Helen's thoughts. The author told me that the narrator sounds exactly like Helen sounded in her head, and I can imagine it. Although, Helen is only 45 years old, and to me, the narrator sounds a bit older, more like late 50's.

I was given a free copy of the book with a request for an honest review.

I really enjoyed this book. I loved the creative detail of Helen's getting annoyed at not being suspected so deciding to demonstrate the possibility. I also really appreciated the way the main character suffers from lupus and is disabled by that but shows that with determination and using her contacts, she can do what is necessary. She also demonstrates that though her body may suffer, her mind is still sharp.

Lisa Valdini performs the narration of this book in an excellent manner. Each character’s voice suits her or him perfectly. I could see the upper class lawyer Tate versus the lower class driver Jack. I also could see how annoying Melissa must be.

This book is very well done.

Disclaimer: I received this book for free from the author, but it in no way influenced my review.

I should have read the reviews more carefully. If I had I would have been warned about how unrealistic and time consuming this book is. It makes no sense and is full of contradictions. The lead character wants to be left alone but seeks out a murderer, making friends along the way. She is 45 and has given her nieces power of attorney over her finances and is constantly in a power struggle with them for control of her life. She finds a woman murdered in her yard and is angry that she is not considered a suspect. All of the characters are flat and not very likable and the story was drawn out and boring. Listening to this book was a complete waste of time.