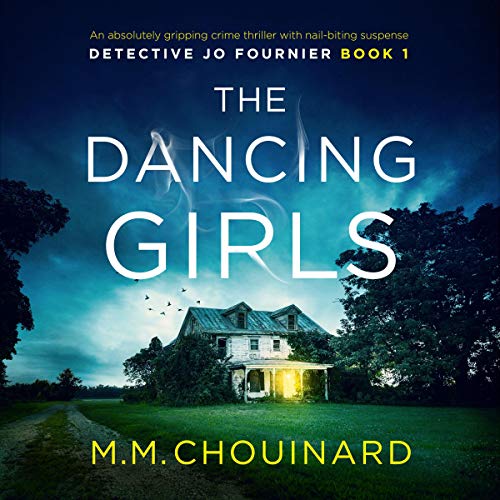 By: M.M. Chouinard
Narrated by: Patricia Rodriguez
Try for £0.00

The light in her wide brown eyes dimmed as she drew her last breath. She might have been beautiful lying there on the floor, if it wasn’t for the purple marks on her neck and the angry red line on her finger where her wedding band used to be....

When Jeanine Hammond is found dead in a hotel in the picture-perfect town of Oakhurst, newly-promoted Detective Jo Fournier is thrown into a disturbing case. Who would murder this shy, loving wife and leave her body posed like a ballerina?

Jo wants to know why Jeanine’s husband is so controlling about money, and where Jeanine’s wedding ring is, but before she and her team can get close to the truth, another woman is found strangled in a hotel, arms placed gracefully above her head like a dancer.

While digging through old case files, Jo makes a terrifying link to a series of cold cases: each victim bears the same strangulation marks. But the FBI won’t take Jo seriously, and if she disobeys direct orders by investigating the killings outside of her jurisdiction, it will mean the end of the career she’s already sacrificed so much for, even her relationship.

Just as Jo is beginning to lose hope, she finds messages on the victims’ computers that make her question whether these small-town women were hiding big lies. Jo thinks this is the missing link between the victims, but she knows the killer is moments away from selecting his next victim. Will it lead her to the most twisted killer of her career in time, or will another innocent life be lost?

An absolutely brilliant new crime thriller series that fans of Robert Dugoni, Lisa Regan and Melinda Leigh will devour in one sitting.

"That ending! Holy moly I did not see that coming. A twist to end all twists! It was fantastic.... Really look forward to more books in this series. If they are anything like this one, they are all going to be winners!" (Once Upon a Time Book Reviews, five stars)

What listeners say about The Dancing Girls

Pretty good police procedural involving a serial killer and the internet. The story is entertaining enough but the ending is the best. Each victim has their own part on the book and is fleshed out. Their wants and desires and what led each one to seek companions online.
The antagonist is also fleshed out with all his reasons for committing the murders and the way he leaves the women he's killed.
I will definitely purchase more books in this new series.
Patricia Rodriguez does an excellent job narrating.
HIGHLY RECOMMENDED.
If you found this review helpful please indicate so.
Thank You.

I really tried to listen to this book. I cannot speak to the writing or the story because I couldn’t get past the narrator’s voice. Her voice is so dramatic it leaves no room for my imagination to take hold. I forced myself to listen, but found my mind drifting away because i felt assaulted by her every word. Her voice is so theatrical. Too much over-acting. Way too forceful. Too bad.

I couldn’t finish this book

First, I want to say that I listen to books with my blind husband all the time, we listen to 2-4 books a week so I am familiar with good readers. This book may have been so much better, but I couldn’t get past the reader “punching” every other word part of the time, and the other part her voice raised at the end of every sentence. She also mispronounced a few of the words. The last few books I’ve read seem to have readers that don’t know how to pronounce certain words, and it’s clear the don’t bother to look them up. This book may be worth reading in print, but I’m honestly not sure. It’s definitely not worth trying to listen to it!

I enjoyed the ending but skipped about two hours of the book to get there. I found the inner monologue of the killer and his interactions with Emily very tedious and unbelievable - especially when read by the narrator. I am not sure if I found the narrator so annoying because the writing and characters were not good or if the narrator made the writing seem worse than it was. I would say save your credit.

Can't even finish this book

Literally terrible. I can't even finish it, the story is juvenile and painful to sludge through.

A friend gave me this book and I really enjoyed it very good. Mystery & thriller.

It was easy to read and follow; however, it felt very predictable. It took me a while to get through it because it was easy to put down.

Online gaming can be deadly

Good story about a serial killer who finds his victims in an online gaming forum. I’m not a gamer so the gaming interaction/chats bogged down the story for me. Told from various POV, some parts are engaging and the ending was surprisingly good.

slow start but great twist at the end

An ending I was not expecting. At the beggining slow but interesting at the end