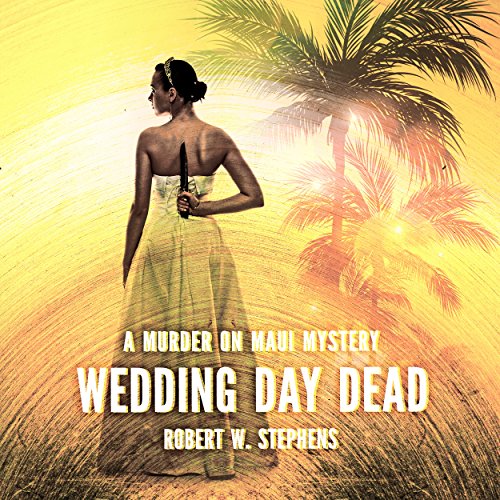 Edgar Allan "Poe" Rutherford's life has never been better. He's just relocated to Maui and moved in with his best friend, Foxx. And he's dating the beautiful and sexy Detective, Alana Hu. But Alana's ex-boyfriend just came back to town. He's charming, good-looking, and wealthy, and worst of all, he's driving a serious wedge between Poe and Alana. To make matters more annoying, Poe's stuck attending a wedding he desperately doesn't want to go to.

Then a member of the wedding party is stabbed to death, and Poe gets dragged back into another murder investigation. This time, though, he's one of the prime suspects. Can Poe discover the identity of the killer before he gets arrested, and can he repair his broken relationship with Alana?

Wedding Day Dead is an intriguing murder mystery filled with an eccentric cast of characters and plot twists you'll never see coming. It's the sequel to Aloha Means Goodbye.

The detective is not an alcoholic, he’s not got a deep grief in his past,he’s not troubled and doesn’t have a special gift that makes him conflicted. He’s not a super hero and he often comes of worst in a fight
He is attractive ,humorous in a Magnum type of way, faithful(so far) to one woman and a reasonable private eye. The audio book kept me engaged and didn’t give me nightmares. Some I suppose might find it bland- I found it engaging so much so that I am listening back to back, something I rarely do. A first class narrator and a credit well spent

Would you listen to Wedding Day Dead again? Why?

Yes. The story was great. The narrator was great.

Absolutely. There were lots of scenarios built up as to how the murder had occurred. Poe was a great character who easily keep me going as well.

I really enjoyed the characterisations that occurred through the use of the narrator's voice.

Wedding Day Dead was a murder mystery set on the island of Maui. I liked the idea of Poe who had just moved to Maui to lived with his friend Foxx and to maintain his new relationship with Alana. Poe is frank and honest and has great instincts. He was fun to listen to and kept me engaged in the story. The whole book is from his point of view which is a refreshing change from other authors who have taken to splitting their books across characters. This was the second book of the series and I found it easy to follow despite not having read the first. I enjoyed the mystery of the book, having absolutely no idea about the killer until all was revealed. There were a few possibilities and the author built up a few scenarios well enough to keep me guessing. I definitely recommend this book to others.

I received this book in exchange for an honest review.

I thoroughly enjoyed this author. The plot and character development were excellent. However, what made it a fantastic read was the author’s sense of humor and the narrator’s delivery. I will be enjoying more of this author’s novels and will be researching this narrator’s list of works, too.

Good story mystery humor romance murder everything all rolled up in one story. Don't go to Maui to get married someone will die before the wedding.
I received this free for an honest review.

We both enjoyed this murder mystery set in Maui. great characters. The interaction between the characters is good. Ending was not expected. Would listen to this book again.. Enjoyed the narration.

A visit to Maui

My Review
This book didn't really live up to the blurb, so as a result, this is a short review. I was expecting more excitement, more tension, but it never really happened for me. To start with, the characters didn't behave in a believable way, in particular the two sisters. I also found it to be quite strange behaviour on Alanas part, I couldn't understand why she would bother to conceal a past relationship from Poe. The murder was of the obvious victim, and I will say, the author did leave the reader enough clues to solve the mystery.

Perhaps I would have enjoyed it more had I read the first book, however, I don't think I will be following any more of Poes adventures.

Narrator
R.C. Bray is an ward winning narrator, and quality shines through. I thought he nailed the characterisations without going overboard, a good, laid back story telling style. I enjoyed listening to him.

Would you consider the audio edition of Wedding Day Dead to be better than the print version?

I haven't enjoyed the print

The plot was well-driven and engaging. I have not listened to the first book, but this one was well-written and didn't require historical knowledge of the characters to enjoy.

I did laugh---the narrator is fantastic and has great comedic timing.

Another great listen from RC Bray!

What was one of the most memorable moments of Wedding Day Dead?

The most memorable moments for me is Maui the Dog's loyalty to Poe. Maui is by Poe's side in the good and the bad and he is a dog that can be counted on.

What does R.C. Bray bring to the story that you wouldn’t experience if you just read the book?

Mr. Bray brings emotion and depth to the characters. This is book 2 in the Murder on Maui series and Mr. Bray's characterizations are consistent with the 1st book. His reading of the book drew me in even more than if I had just read it.

Wedding Day Dead continues the story of Edgar Allen "Poe" Rutherford and his move to Maui. After a previous trip to visit the island to visit his friend Foxx, Poe sells his home and moves to Maui and in with Foxx. Once there, he continues to date local Detective Alana Hu. When Alana's sister announces she is getting married tensions are high between the sisters and eventually Poe and Alana.

After one of the bridal party is murder, Poe gets drawn into the investigation by the victim's family. Poe questions some of the suspects and gets a few leads but then lands in hot water himself as a suspect. Who committed the murder? Poe does his best to find out before he ends up convicted of the crime himself.

Mr. Stephens continues the story of Poe and his adventures on the isle of Maui. I enjoyed all of the colorful characters Mr. Stephens has created. Mr. Bray does a wonderful job of drawing you into the story and keeping you wanting more. I look forward to more books in this series.

I recommend both books 1 and 2 in this series to my friends who enjoy a good mystery.

Where does Wedding Day Dead rank among all the audiobooks you’ve listened to so far?

This book ranks high on my list to listen to.

The story moves right along & holds your attention throughout.

What does R.C. Bray bring to the story that you wouldn’t experience if you just read the book?

The readers help you visualize the characters & scenes.