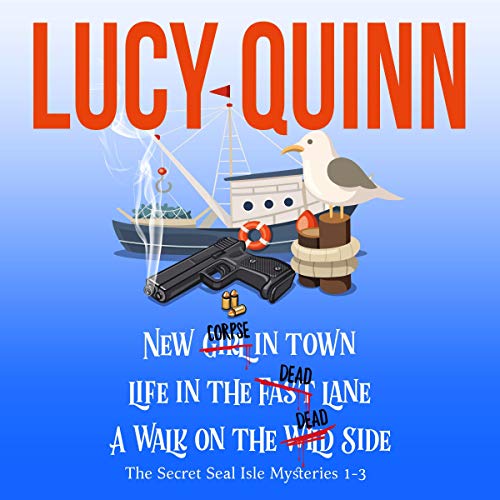 This is a bundle of the first three Secret Seal Isle Mysteries audiobooks:

FBI Agent Cookie James is enjoying her extended leave from the agency on Secret Seal Isle, managing her quaint inn and flirting with the oh-so-sexy handyman Dylan Creed...until her 60-year-old mother goes skinny-dipping and is almost drowned by a corpse.

A phone call to the sheriff should mean the end of Cookie’s involvement, but when it’s clear the sheriff has no interest in the investigation, Cookie calls in reinforcements...her ex-partner, Hunter O’Neil. Suddenly, it’s like old times while the pair questions the residents of Secret Seal Isle. Except it’s not. Now, she has both Hunter and Dylan vying for her attention, a wayward hippy mother, and a potential killer on the loose.

With her love life heating up, her mother lighting up, and all signs pointing to the most unlikely suspect, Cookie does the only thing she knows to do - focus on solving the case.

Life in the Dead Lane

All Cookie James, FBI agent and innkeeper extraordinaire, wants is a romantic date with her hot handyman...but what she gets is a corpse presented with a big red bow.

When she and Dylan discover a boat with a dead body, not only is her picnic ruined, but a woman from Dylan’s past returns to the island. The famous rock star appears to want a comeback tour with her former bodyguard. But Cookie doesn’t have time to worry about that, because her oh-so-sexy ex-FBI partner has arrived, too. And he’s ready to make a little music of his own.

With an entangled love life, too much manscaping, and a songbird in trouble, it’s once again Cookie’s job to wrap up another murder.

A Walk on the Dead Side

All Cookie James wanted was a romantic island picnic with her sexy handyman, Dylan Creed. What she got was a lobster trap full of drugs. As an ex-FBI agent, Cookie's determined to hand the evidence off to local authorities and stay out of the fray. But when a package arrives with a gory warning, she has no choice but to call in her former partner, Hunter O'Neil, and investigate the case.

Hunter’s arrival brings more than crime-fighting expertise. He'd like his connection to Cookie to finally be more than professional. There's no denying the sparks between them. Except with Dylan in the picture, Cookie's realizing someone else might be lighting her fire.

Unfortunately, her love life is going to have to wait. Between kidnappings, attempted murder, and stolen kisses, Cookie James has a case to solve.