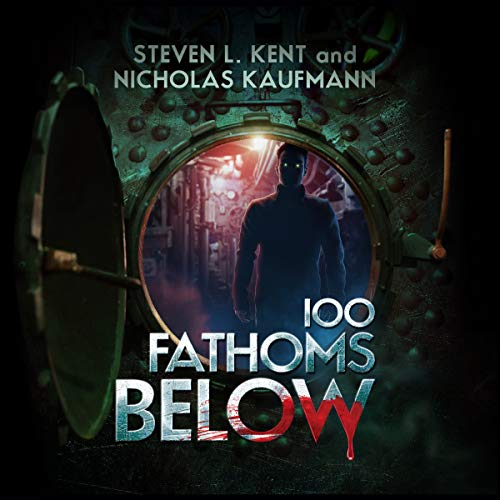 The depth at which sunlight no longer penetrates the ocean.

1983. The US nuclear submarine USS Roanoke embarks on a classified spy mission into Soviet waters. Their goal: to find evidence of a new, faster, and deadlier Soviet submarine that could tip the balance of the Cold War. But the Roanoke crew isn't alone. Something is on board with them. Something cunning and malevolent.

Trapped in enemy territory and hunted by Soviet submarines, tensions escalate and crew members turn on each other. When the lights go out and horror fills the corridors, it will take everything the crew has to survive the menace coming from outside and inside the submarine.

Combining Tom Clancy's eye for international intrigue with Stephen King's sense of the macabre, 100 Fathoms Below takes listeners into depths from which there is no escape.

What listeners say about 100 Fathoms Below

I think this book is absolutely amazing. The suspense kept me literally on the edge of my seat, another I once thought, way overused expression. Not this time. The fact the crew are all trapped together in a small space, plus the terror aboard with them and the enemy warfair, only add to the danger. There were times I could almost hear the kind of music you hear in films during creepy, tense scenes, not knowing who, or what, is round the corner. That was how this one felt to me at times. If you love claustrophobic, Psychological horror along with warfair, this one is for you. One of the best books I've ever read. Loved it! Very well narrated as well. Never heard Sean Compton before, but this book really suited his voice and reading style.

I thoroughly enjoyed this one. The audio is well done and I spent most of my spare time this past weekend listening to it. The tension starts early and doesn't let up. The worst (best) part is, the reader knows there is something creepy hiding on the sub while the crew is clueless and just thinks a couple people are sick or maybe someone is losing it.

Excellent Surprise! This is worth the listen.

I was really surprised by how good this was; it hit me out of left field; it was an impulse buy, and I do not regret it one bit, it was enjoyable all the way through; lots of fun. I hope the authors write another!

Monsters under the sea...

Worth the credit... scary, exciting, and fast paced! Something different... claustrophobic horror in a submarine

I pre odered this book and I'm really glad that I did. It's a nice twist to a old horror movie tale.

Great story the transition from a spy novel to supernatural was well done. The feeling of claustrophobia really sets as things get tense towards the Latter half of the story. It was fast pace scary and well written.

I definitely worth a listen to.

Good overall weekend read. Different “monster” book in terms of location and tempo. Narration was ok but the reader had trouble with different voices.

This was a FUN book! The narrator did an AMAZING job with the various voices and the accents. I’ve found a new favorite author and narrator! I almost became a naval submariner myself, so the descriptions of life on a submarine were even more fascinating to me! I also watched the Call of the Wolf French film on Netflix halfway thru reading/listening to this book which gave me an even better understanding of life aboard a cramped submarine. If you like suspense, horror, and military themed novels then THIS book is for you!!

this is an interesting take on a very well-known story the creatures are different from all other tales have to give them five stars for originality I had no problem listening to the entire book I highly recommend anyone who likes vampire type stories give this a listen.

Good narrator. Story moved right along. I will read more by this author. Good characters.

Got to say that it was better than I was expecting. The narrator could have been a bit more distinctive between the voices, but overall nailed it.