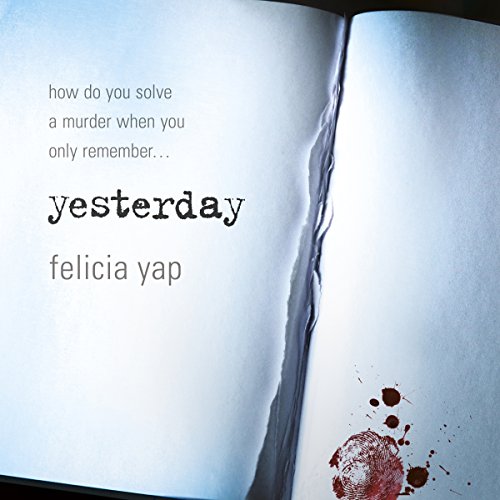 A brilliant high-concept thriller - a debut with all the intrigue of Gone Girl and the drama of Before I Go to Sleep. Just how do you solve a murder when you can remember only yesterday?

There are two types of people in the world. Those who can remember only yesterday and those who can also recall the day before. You have just one lifeline to the past: your diary. Each night you write down the things that matter. Each morning your diary tells you where you were, who you loved and what you did.

What listeners say about Yesterday

Set in a surreal version of the world in 2015 divided into mono and duo human beings monos can only remember 1 day and duos two days and all heavily rely on iDiaries to remember their past. A duo writer and aspiring politician and his mono house wife are confronted with the sins of their past triggered by the discovery of a dead body. In the course of the story is becomes clear that everybody has their secrets and that nothing is black and white. While in hindsight many things become clear, nothing is really predictable.
A brilliant story performed by two of the finest actors Indira Varma and Rory Kinnear. While a shared narration not always works, on this occasion it is a brilliant way of allowing the listener to dive into this surreal world.
Best audiobook for a very long time!

I had been waiting for this to come out having read all the pre-pub hype.
Was not disappointed, it is everything it claims to be. Fast-paced, unstoppable, very cleverly put together and above all, thrilling!
For anyone who enjoyed Girl on a Train or Gone Girl. Highly recommend.

I had to double check it wasnt a childrens book

Very predictable storyline, hardly any suspense and the characters were very wooden. I wouldn’t recommend. Loved the idea of the concept but so many holes and things that didn’t make sense made it quite a nonsensical book that I had to force myself to finish.

The brilliant premise of a world in which people can only remember one or two days at most helps make this novel quite captivating. The plot is full of unexpected twists, as the past is investigated not only by the police detective looking for a murderer, but also by the people involved with the murder and with the victim. They discover appalling events as well as surprising kindnesses about themselves, while the reader is continously rearranging events and interpretations and connections. Quite a good one.

couldn't get past the first 10 chapters. Boring story, boring narration. would not recommend at all

A brilliant take on the whodunnit formula! I’m off to write that in my diary ....

The premise of the book is a world where people one remember certain things. It took me a little while to get my head round it but then I enjoyed it, though there were bits where I felt it didn’t fully work. Nevertheless, it was entertaining and had suspense and i enjoyed it.

This is a good book, I enjoyed it and it’s got a few twists and turns that are great! There are a few bits about the concept that are a little difficult to believe and you could pick holes in those but taken for what it is, a work of fiction, it’s an entertaining read.

fantastic how the story builds

Really well read. The story starts a bit slow and steadily builds and builds. It's a great concept, really loved it!

What made the experience of listening to Yesterday the most enjoyable?

Really it was the unusual story that made it enjoyable. I have not read anything quiet like it so it made a change from the usual psychological plots I have enjoyed. However I did feel that it could have gone a lot further with the whole concept of the loss of memory. I could not really understand the point of the Hans character and his own memory issues in relation to the plot as a whole and his relation to Sophia was never really resolved. So a good story but some how it fell short of it's potential.

Sophia, I loved the ironic way she was portrayed by Indira Varma. She was clever and witty and I enjoyed her chapters the best.

Indira's voice was engaging, clever and addictive.Rory's voice was perhaps the most irritating I have ever heard in an audio book, specifically the voice he gave to Hans, truly dreadful.

There were not really any moments that moved me but a few that made me go Ahhh interesting.

Overall I enjoyed this book apart from the sections that Hans narrated. Generally though I thought it could have been so much better and the characters developed far more. The twist at the end was clever and I had not anticipated this but the trigger behind it was weak. There were also large chunks of the plot backstory that were never explored or explained and at the end the reader was just left with loose ends.