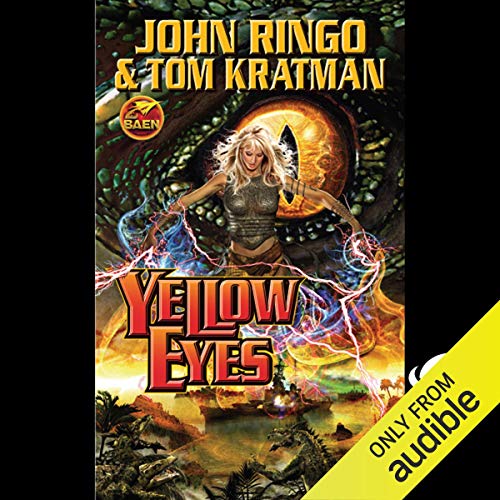 By: John Ringo,Tom Kratman
Narrated by: Marc Vietor
Try for £0.00

The Posleen are coming and the models all say the same thing: Without the Panama Canal, the US is doomed to starvation and defeat. Despite being overstretched preparing to defend the US, the military sends everything it has left: A handful of advanced Armored Combat Suits, rejuvenated veterans from the many decades that Panama was a virtual colony, and three antiquated warships. Other than that, the Panamanians are on their own.

Replete with detailed imagery of the landscape, characters and politics that have made the jungle-infested peninsula a Shangri-La for so many over the years, Yellow Eyes is a hard-hitting look at facing a swarming alien horde with not much more than wits and guts. Fortunately for the human race, the Panamanians, and the many veterans that think of it as a second home, have plenty of both.

What listeners say about Yellow Eyes

Earth is defended and the Posleen are gone

This is labeled as the 8th book I think but really its the 6th book - the first 4 are Hymn before the battle, Gust Front, When the Devil Dances, and Hells Faire - after that you should read Watch on the Rhine, and then this book because they are still on Earth at this point and fighting the Posleen - then go on to the Callys War and Sister Time, and Honor of the Clan and on to The Tuloriad, then Eye of the Storm and lastly The Hero.

This sroty was started with Watch on the Rhine where the SS was brought back, that book was sorta slow on the fighting and the whole SS thing was sorta strange, this time its in Panama and there are older people getting brought back to fight and stuff.

There is some more fighting here and some really stupid parts about war crimes and stuff that make no sense to me since if its against the Posleen how is it a "war crime"? werent these laws made for Humans not creatures that eat you?

There is a really good part with one of the AID's that is just awesome to watch play out, in the end its cool how the last of the Posleen that arent fighting anymore and have given up are doing things that are sorta normal.

I would say that this is much better then Watch on the Rhine, but not as good as the first 4 - if you are reading this series and you simply love it, then you should read these at least this one and skip Watch on the Rhine if you want to there isnt any real continuation of the story from that book in this one.

Glad I went back and picked it up

While listening to the original LONG series of books, I decided to skip this book since I didn't think I'd be all that interested in the "Panamanian perspective"... I'm glad I went back and picked it up (WELL after I finished the rest of the series)... It's every bit as good as the rest of the books!!

I love a good sci-fi book as I started listening to this book I was very entertained and intrigued by the large assortment of characters, one of the best read books to date. This has a twist of a love story and human survival entwined throughout the book. Many great people the corrupt, bad, misunderstood and of course the heroes which came out as the strong independent people that made this country great. This is a must read for those into Sci-Fi even for first timers. It has it all from hard work to courage, cowards, strategy and miss-understood aliens. John Ringo also included a must read epilogue of how this world is getting twisted, relaying to the book and now, especially now.CC

Another great addition to the Series

What made the experience of listening to Yellow Eyes the most enjoyable?

The author, by his own admission, has extremely conservative political opinions which he discusses at the end of the book....giving fair warning to all to turn it off if they are liberals. Unfortunately, these view are infused into the story line so that all organized government and politicians are characterized as amoral, cowards, and traitors. There is always a little truth in such allegations but it is really irritating to have it beat into you through out an otherwise great story....oh yes, will we ever learn who the Alendata are and what they have in mind?

I'm baffled about this one, both the book and the positive responses to it, since my own experience was so different. I generally like JR well enough and I love tough Sci-Fi, but I could find no engaging story line and nothing like a cast of developed and differentiated characters, simply nothing much to connect with here and yet it keeps on going on. My experience of the book and its reception, so far out of synche with the aggregate, like running in a marathon with no course, no finish line, and 10,000 other runners who all look the same.

This author is outstanding i

Writing with Passion and descriptive detail. This author has an amazing ability to create believable possibility. The alder not a series over all is a 5 star read.

loved every moment of the book. the performance was just as good. I've been aboard USS Salem and could picture the scenes on board of Daisy Mae. I recommend it highly.

Loved this book, another good chapter in this series. I did not read the series in order, so this book cleared up a lot of questions I had.