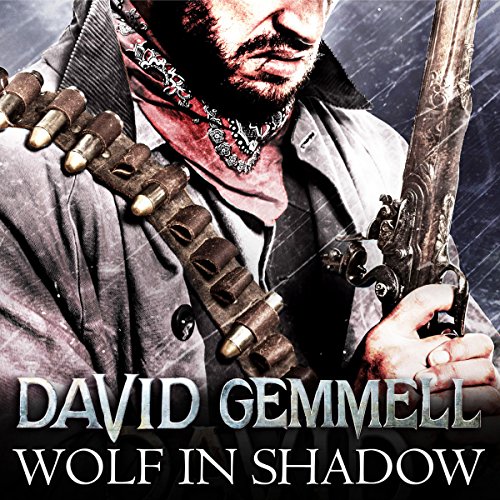 It is 300 years since the world toppled on its axis and civilisation was destroyed. In this savagely reshaped world ruled by brigands and war makers, a rider seeks a lost city. Pursuing a dream to calm the violence in his soul, Jon Shannow, the brigand slayer, desires only peace. But from the Plague Lands emerges a fresh terror.

The Lord of the Pit and his hell-born army seek to plunge mankind into a new demonic era. Seemingly invincible, they make a fatal mistake: they take Shannow's woman for blood sacrifice. And find themselves facing the deadliest warrior of the new age: Jon Shannow - the Jerusalem Man.

Jerusalem man at his best.

I bought this book in 87, thirty years later still a great story to listen to.

I got hooked on David Gemmel through his Drennai books, then his Sipstrassi books surpassed even those. So when I found them on audio I had to have them. True, the narration could be a little better, but if you don't allow that to detract from the story then you're in for a shell of a ride. To be honest, I didn't find Christian Rodska all that bad as a narrator, certainly not as bad as others have made him out to be (except for the Chinese accent). I'm just glad I didn't let the negativity over the narrator deter me from getting this amazing audio book.

Always loved Gemmel's books and particularly the Jon Shannow series. The stories are epic hero stuff as you expect and 80% of the time the performance is good. Some of the accents are shockingly bad -especially the cringeworthy-awful Jamaican accents. Took the shine off a little for me.

Had been looking forward to this Gemmell book for some time; it's long been one of my favourites and I pre-ordered it when it appeared some months ago. It's a great story and Shannow is one of Gemmell's best characters. This aside, I'm really disappointed with the narration and can honestly say that it is the worst I've listened to, bar none. Most of the accents are just utterly ridiculous - regional UK accents but all delivered in an incredibly irritating nasal whine. Some others are just comical - for some reason, known only to himself, the narrator adds speech impediments to the mix! The overall effect is at very best, distracting and at best, ruinous to the story. I certainly won't be buying the rest of the series (will just re-read them instead) and really doubt I'll even finish listening to this one. Stay away!

I first read the sipstrassi omnibus about 25 years ago,after listenin' to Sean Barrett read the Druss novels I thought "I hope he does the rest" but Christian is outstanding',can hardly wait for more...

Where to start on this one? Wolf in Shadow is a postapocalyptic heroic fantasy western with gunslingers, farmer folk, eskimos, magic stones, and a superhero driven by (among other things) religion, the love of a good woman, and a compulsion to find the City of Jerusalem. Enough different tropes there for you? Throw in Atlantis and a few others that shall remain surprises.

I am a huge fan of David Gemmell’s books. This one, written in 1987, is not typical. It is not 'historical fantasy' (Lion of Macedon, the Troy trilogy) or set in a medieval Earth-based fantasy world (the Drenai books and others). Its setting is a postapocalyptic, near-future Earth. The apocalypse was Earth tipping on its axis, with civilization (and most people) having been destroyed in massive floods as oceans and land masses switched places.

Why the people who are left should have become a society like that of the 19th century American West is never explained, other than by the fact that David Gemmell apparently grew up with an obsession for American western movies. Jon Shannow, the Jerusalem Man, arrives toting a gun and a Bible, in scenes vaguely reminiscent of the classic film 'Shane.' I can’t even begin to describe the events that follow. They come fast and furious, with constant action and unexpected twists and turns.

This is the third book set in world where magic is generated by golden Sipstrassi “stones of power.” The first two, “Ghost King” and “Last Sword of Power,” are loosely (*very* loosely) based on Arthurian legend, so there is a major jump in time. I recommend reading the first two--which are more typical of Gemmell’s style--first.

I found Jon Shannow and his sidekick Batik unique, fascinating, and fully developed characters. I really enjoyed the book, even though it pulled too many rabbits out of hats (or, if you prefer, deuses out of machinas). It’s a breathless whirl of action that, in the final climactic battle, become a little Too Much--hence the WTF factor. The epilogue is highly satisfying, though, and the Shannow saga should have ended there, which I’ve read was what Gemmell originally intended. However, he went on to write two sequels. I read “The Last Guardian” years ago and did not like it and never bothered with the final one, “Bloodstone.”

The narrator is Christian Rodska. I think he's a great narrator and here he does a terrific job with a wide range of characters. However, I note that on Audible UK, a reviewer has taken the trouble to post a rather nasty diatribe about the narration under all three Shannow books, so I guess some people don’t agree with me, and you’d better listen to the narration sample.

this story has a little bit of everything you do is Magic and six guns, it has a post-apocalyptic world setting and ancient ruins, and it has a battle of good vs evil. It all works pretty well, and mixes together without being jarring. I enjoyed the story and the narration. I picked up the other two books and will be finishing the trilogy.

going to get them all. great book great storyteller!

Loved it just as I did all of David Gemmell's books. I highly recommend it!

One of the best writers ever

Legit one of my favorite end of times book series of all time. A legit gunslinging good time.

Great book, not a good match for Narrator.

Great story. Not a fan of the narrator's voices. His accent is thick and makes them all sound to similar.

Competent but not excellent.

This is well done fiction and it skips along at a good pace. Personally, I don’t read fiction because I’m interested in the lives of imaginary people - I read fiction to be exposed to new ideas.

This book didn’t challenge or intrigue me with new ideas or new points of view. It is competently written and executed but very formulaic. If that’s your jam, you’ll dig it.

I’ll keep looking for another series.