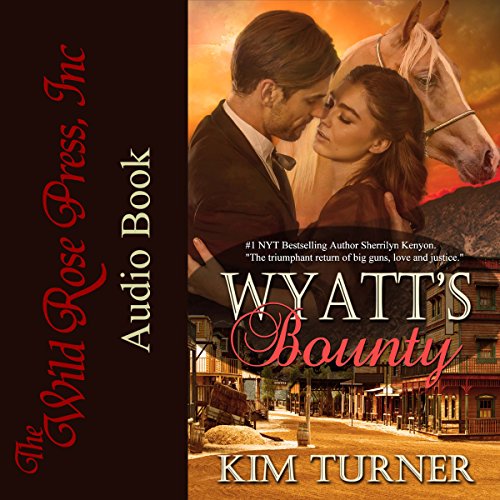 Bounty hunter Wyatt McCade is taking down outlaws one at a time. He's been in love with Tess Sullivan for years, but she refuses to give in to her feelings. Reeling from the rejection of his marriage proposal, he chases bounties with little concern for his own safety. When word reaches him that Tess never left for Boston, he rides for Cheyenne to confront her. Instead, he is ambushed and left for dead.

Doctor Tess Sullivan shattered her heart by refusing Wyatt McCade's marriage proposal and making the biggest mistake of her life, by holding onto a secret. Pining for his return, she blames herself when he arrives in Cheyenne near death. Forgiveness comes quickly in his arms, but she finds herself a pawn in a deadly game of revenge.

When McCade lands are threatened, Tess is caught in the balance. On the bounty hunt of his life, Wyatt will risk everything to rescue the woman he loves.

I so love the McCade boys this is an amazing story

What made the experience of listening to Wyatt's Bounty the most enjoyable?

Kim Turner has a magical gift for writing about Cowboys and Indians in the Old Wild West, she really makes her characters come alive so that you really feel like your there with them as they go on an epic journey of discovering secrets and uncovering lies that will keep you on the edge of your seat.

What other book might you compare Wyatt's Bounty to, and why?

I just loved Sawyer's Rose the first book in this series so much that when I saw that Kim Turner had written a book about Wyatt McCade I just had to listen it. This book can be read as a standalone but is also a continuation of the story of the McCade brothers and their many adventures of fighting for what is right while trying to stay on the right side of the law and of finding love along the way.


Have you listened to any of Dawson McBride’s other performances? How does this one compare?

I have listened to both books in this series and I can say that I enjoyed them both equally.

This story was so good I just didn't want to stop once I started listening to it, the passion between Wyatt and Tess was so endearing and the fighting and plotting was so thrilling and so totally heart stopping.

This story has a great plot line and has many twists and turns. The story you can tell has been very well written and you won't be disappointed if your a fan of listening about hot dreamy cowboys and romantic adventure stories.

I enjoyed these characters.

I was keen to listen to this book after meeting Tess and Wyatt in the first instalment. They made a nice couple. Their story didn't disappoint although it was predictable.
We also see a conclusion to the long running feud Bennett has with the McCade family. There is plenty of action and suspense which really held my attention although there weren't any surprises or twists in the story. I enjoyed the brothers working together to overcome an evil that had plagued their family for years.
I liked both stories in this series and I would recommend listening to Sawyer's Rose first as you get the back story to the feud, the death of the Wyatt's father and there's more of Tess and Wyatt to enjoy.

I voluntarily reviewed a gifted copy provided by the author.

Wow! Dawson McBride once again narrated this great book. I loved revisiting the characters that were established in the 1st book of this series. The story in this book flows nicely. It was suspenseful and surprising. This author is on my to buy list.

we could not get enough of this book. definitely as good as the first one in the series. can not wait for the next one. my patient was very upset when I told her I didn't have any more McKay books.

western romance with lots of drama and suspense

Another 'McCade' story that is chocked full of drama and suspense, and, if you have a vivid imagination like me, some gruesome moments...like when Wyatt was attacked...eesh! So, this is Wyatt and Dr. Tessa's story. We learn that Tessa is about to move back to Boston for a special medical program. In an effort to get her to stay in Cheyenne, Wyatt proposes marriage...and she rejects him. Heartbroken and angry, Wyatt disappears for months and avoids his family home. Finally, needing some family time, Wyatt heads home, only to be attacked by an enemy and minions just outside of town...and left for dead. Tessa works feverishly to save Wyatt's life and sticks by him during his long recover...then she explains why she rejected him...she has a huge secret that she believes would affect their relationship. The pair have to navigate a relationship, and eventually marriage, while the McCades fight long time enemy, Brett, to keep their land. If you love westerns, lawmen and excitement, then this book is for you. Now to wait for the next McCade's story...
I voluntarily accepted a complimentary copy of this book in exchange for an honest review

Wyatt and Tess have loved each other forever, it seems. But the loss of Wyatt's father and secrets from Tess' past aim to drive them apart. But when Tess tries to leave and a bounty is placed on her head, Wyatt goes on the hunt to collect the best bounty of all....

This is the second book in this series. It is a wonderful story, full of desperation, loss, hope, and love. I enjoyed every moment!

I had high expectations after Sawyer’s book and Wyatt’s did not disappoint! I can’t wait for future books by Kim Turner. Definitely an author to follow! And loved the narration by Dawson McBride! His voice is so fitting for the characters!!

Another great adventure by Kim Turner! I liked Wyatt's Bounty as much as the first book in this series, Sawyer's Rose, and can't wait for book 3 to get onto audio so I can enjoy that one as well. The narrator did a great job telling the story, and I loved all the adventure that Wyatt and his family had in this book. Great job, Kim Turner!

Tess Sullivan and Wyatt McCade have been circling each other for years. When Wyatt is injured and left for dead, Tess must care for him and live in the same building as him for an extended period of time. As the two grow closer, Tess is worried that Wyatt will reject her once he finds out her secret. However, Wyatt has always loved the beautiful doctor. Meanwhile, Wyatt's family is once again dealing with an old foe who is threatening their land and their way of life.

If you're looking for a story with cowboys, female empowerment and constant threats to life and limb, this is the book for you.

A love story set in the wild west, so naturally, it came with action, suspense and drama. Wyatt's Bounty was a truly enjoyable listen and Dawson McBride's narration was simply exceptional - I could listen to hik day and night and I would still want more!

As a sequel to Kim Turner's Sawyer's Rose, Wyatt's Bounty was not a disappointment to me! Highly recommended.

I received a copy of this book in exchange for an honest review.

Worth Listening to Twice

I enjoyed Wyatt's Bounty so much it was worth a second listen. Suspense, romance and a look at the brutality of the settlement of the wild West are all included in this book. Wyatt and Tess's story brought a tear to my eye more than once but so engaging that I wanted to continue listening even when I should be concentrating on other tasks. One thing that stood out for me was the referral to "suffering a soldier's heart", which equates to what we currently refer to as Post Traumatic Stress Disorder. Dawson MBride's voice adds a degree of realism to this historical western reading. Kim Turner is an extraordinary wordsmith and I can't wait for the next book in the McCade saga.

This was another awesome western romance and was as good as the first one. It was filled with family, romance and suspense. I just love Wyatt! The narration is fantastic! Highly recommend this audiobook and can’t wait for more audiobooks about this family!