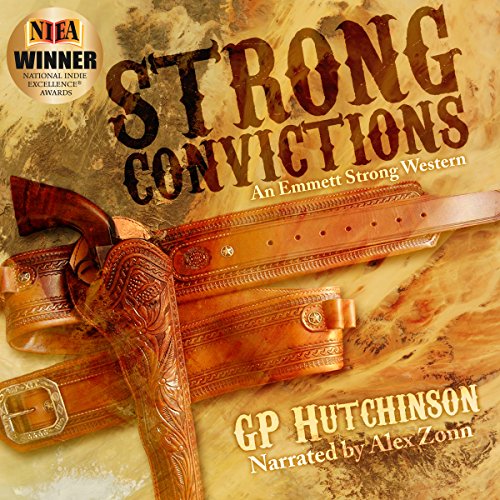 By: GP Hutchinson
Narrated by: Alex Zonn
Try for £0.00

In 1876 the seemingly impossible happened in San Antonio, Texas - Emmett Strong, a prodigy of a pistolero, accidentally shot his own young wife in a showdown gone awry.

Five years later, death again visits Emmett's family, and now - want to or not - he's going to have to overcome his reluctance to draw his six-gun if he's to catch and bring to justice the crazed gunman who murdered his brother. The pursuit of his brother's killer takes him all the way to Nevada's Comstock country where the assassin has taken refuge with rich and powerful kin.

Among the many unexpected situations Emmett encounters in Nevada is forbidden love when he falls for Li Xu, the fascinating daughter of Chinese immigrants. But before the relationship has time to bloom, Li Xu disappears - kidnapped along with five other young women.

Can Emmett afford to leave off the chase of his brother's murderer to search for and rescue the women? Can he afford not to? With success hanging on quick thinking and quick shooting, can he take one last shot at both love and retribution?

What listeners say about Strong Convictions

By the 3rd chapter i'd lost interest half way through I quit it. It was not Louis L'Amour.

Great story !!! Love to hear more , listen while driving as I drive so much.

Great writer and excellent narration. Kept me interested and wanting more! Highly recommend for those who love westerns

Could have been better.

Chapter 7 Emmit said he has never been to Nevada and yet through out the book he tells his friends all about each town they come to. Good story base just a little contradicting at times.

Good book. Could not stand listening to the narrator, even through the first chapter - sounds like his dentures are loose & he lacks enthusiasm. Went to reading the book instead. What a difference a good voice narrator makes - especially for visually impaired people who really appreciate listening to books daily. Do authors check out narrators? It reflects on them, don't they realize? This one might consider how it affects the overall audio book review.

Would you consider the audio edition of Strong Convictions to be better than the print version?

Emmett Strong because he seemed like a genuine person.

I liked his delivery-- he's right up there with George Guidal.

If you could take any character from Strong Convictions out to dinner, who would it be and why?

Different plot-diverse characters- all bound up in a damn good story.