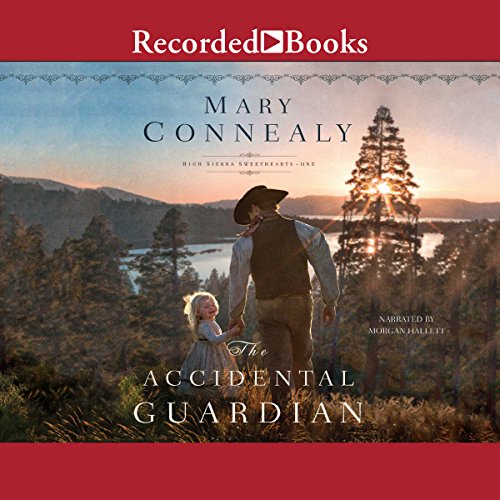 By: Mary Connealy
Narrated by: Morgan Hallett
Try for £0.00

When Trace Riley finds the smoldering ruins of a small wagon train, he recognizes the hand behind the attack as the same group who left him as sole survivor years ago. Living off the wilderness since then, he'd finally carved out a home and started a herd - while serving as a self-appointed guardian of the trail, driving off dangerous men. He'd hoped those days were over, but the latest attack shows he was wrong.

Deborah Harkness saved her younger sister and two toddlers during the attack and now finds herself at the mercy of her rescuer. Trace offers the only shelter for miles around and agrees to take them in until she can safely continue. His simple bachelor existence never anticipated kids and women in the picture, and their arrival is unsettling - yet enticing. Working to survive the winter and finally bring justice to the trail, Trace and Deborah find themselves drawn together - yet every day approaches the moment she'll leave forever.

What listeners say about The Accidental Guardian

This book was okay, but ended abruptly - the bad guys had not all been caught, and then the story seemed to branch off, then just ended. The narrator was a little irritating - her voice was pleasant enough, but she seemed to emphasize the wrong words. Just odd.

I liked the different story line.. It was a good listen on a road trip for me on the back of the motorcycle. No bad language and nothing to blush at. I enjoyed it .

Well good story. I enjoyed it very much. I don't have much quiet time that I can listen to books and I found myself chaffing at the bit to find time to listen. Really wish there was a sequel.

Liked the setting and general story line. However, found too much detailed description in places, unrealistic timing for some things to be able to happen, and a failure to develop further some of the plot lines. Also, ending seemed abrupt.

The narrator did a great job. the story was sweet, heartfelt, and clean. great to listen to.

A good story but missing some vital steps

Good characterizations and descriptions. And the events could really have happened. A couple of other reviewers have mentioned that the ending stops abruptly, leaving the reader kind of hanging. That's a big no-no. It's mean to lead readers clear up to the ending and then stroll off like they can write the ending for themselves. This is the main reason I'm only going with three stars. It should be two and a half.
The other thing that's irksome is the fact that there's no reference whatsoever to the lovemaking between the main characters; you don't have to describe it in detail like a pornographic writer but some info would be nice, like how sweet or grand it was or even, "it fit." That evasivness is also strangely abrupt. You don't throw down your pencil and stroll off when it get hard, you flesh out all of your story.
There are so many really good books, I don't imagine I'll read or listen to any more of Connealy's. I'm not getting any younger.

Enthralling story of the West with mystery.

This is a fast moving exciting story. Character development is excellent. I could hardly wait to get to the end.

I throughly enjoyed the Accidental Guardian by Mary Connealy. I think this is the first book of hers that I have read, but I know it's the first audible [but hopefully not thle last].

She doesn’t know a lot about men

The men in this book are hollow. Not men at all really, just idealized caricatures of what the author thinks men should be. The main character basically grow up as a wild hermit in the wilderness yet has the emotions of a woman and the patience of job. Oh and somehow spent years of solitude reading numerous classical novels and the Bible while teaching himself the survive in the wild. Also three men build two large houses, a barn, three beds, a dining room table set, etc over the course of several days (10?). Their only tools for this Herculean task are two axes and their material is trees yes trees! They actually start chopping them down the first day and are able to shape them into usable material in hours…with a few axes. This is just the beginning of how ludicrous this story is.

Enjoyed reading at very much because it did not an

Enjoyed reading it, but of course it didn't end because is a series. But I enjoyed the basic story. I would recommend the story..