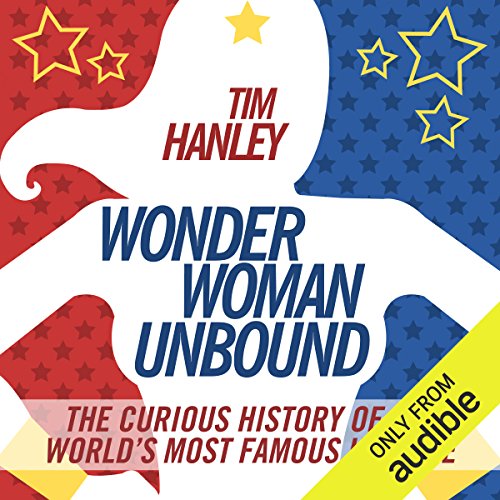 By: Tim Hanley
Narrated by: Colby Elliott
Try for £0.00

This close look at Wonder Woman's history portrays a complicated heroine who is more than just a female Superman with a golden lasso and bullet-deflecting bracelets. The original Wonder Woman was ahead of her time, advocating female superiority and the benefits of matriarchy in the 1940s. At the same time, her creator filled the comics with titillating bondage imagery, and Wonder Woman was tied up as often as she saved the world.

In the 1950s, Wonder Woman begrudgingly continued her superheroic mission, wishing she could settle down with her boyfriend instead, all while continually hinting at hidden lesbian leanings. While other female characters stepped forward as women's lib took off in the late 1960s, Wonder Woman fell backward, losing her superpowers and flitting from man to man. Ms. magazine and Lynda Carter restored Wonder Woman's feminist strength in the 1970s, turning her into a powerful symbol as her checkered past was quickly forgotten. Exploring this lost history adds new dimensions to the world's most beloved female character, and Wonder Woman Unbound delves into her comic book and its spin-offs as well as the myriad motivations of her creators to showcase the peculiar journey that led to Wonder Woman's iconic status.

"A lively and important examination of a key feminist icon." ( Booklist)
"There’s plenty here for Wonder Woman fans; Hanley writes with clarity and enthusiasm, and he’s got a fine eye for the goofy absurdities of comic-book narratives...." (Salon.com)
"Elliott's conversational style enlivens the many footnotes, popular objections to comic books, and anecdotes about the Senate hearings of the 1940s and '50s regarding whether or not comic books cause juvenile delinquency...Most enjoyable are Elliott's lively cartoon quotes and engaging female voices." (AudioFile)

Very good for a first work, giving a comprehensive overview of the history of Wonder Woman.
The decision to include the parallel histories of other female comic book characters is an inspired touch, albeit one that veers into the territory of making the work seem unfocused on occasion.
Also, doesn't quite have the good humour and sparkle that make some similar works (namely The Caped Crusade and Superman: The Unauthorized Biography, both by Glen Weldon) truly shine.
Still, a very interesting read (listen).
Would be interested in a Second Edition taking into account Wonder Woman's greater prominence in the wake of her 2017 film.

facts about how Wonder Woman has been portrayed

I'm not normally a non-fiction kinda gal but I was really curious about this title and I'm glad I gave it a go!

I missed the Wonder Woman era of comics and cartoons but the two reasons that drew me to this book were: I'm a traditional nerd and comic books and superheroes dressed in primary colours appeal to me, and this is the era of the modern feminist.

Tim Hanley splits the book into three main sections, the Gold, Silver and Bronze age of comic book history and the roles that both Wonder Woman and Diana Prince play in those eras.

I found the Golden Age to be particularly fascinating, Wonder Woman was created by a guy called William Marston in 1942.  Among other things, he was a psychologist with an interest in dominance and submission - this is something that makes a whole lot of sense when you look back and realise how much time the characters spend being tied up or lassoed.

On that note - wear headphones while listening to this in public places or at work unless you want to share some learning on sexual psychology and bondage with passers by. Learn from my mistakes.

The purpose of Wonder Woman as a character at the time of her creation was to represent a strong female who doesn't need a man to complete her, which was pretty progressive in the WW2 era when women were being forced back behind the kitchen sink when their husbands came back from the war. However, future writers didn't seem to honour this idea and she steadily grew more pathetic, needy and scantily clad.

I love that someone took the time to write this book, especially someone who seems as disappointed with her progression as a character as I am. I would love to know Hanley's thoughts on Gal Gadot's incarnation of Wonder Woman.

During the 1960s, when feminism took its first stand, Wonder Woman was dusted off and used as an icon but she could only work as such if you ignored most of her storylines and stuck to her original persona. This point in the book opened my eyes to something that I already knew in an abstract way- women were still struggling for anything resembling equal rights in the 60s, the battle we're waging today in the western world is nothing compared to that - the decade my own mother was born in!

Colby Elliot narrates this excellent quality work impeccably, his voice definitely kept my attention when I was struggling to concentrate (this is my first non-fiction audiobook after all!).

This is a book I would recommend to WonderWoman fans, fans of comic books in general and people with even the most fleeting of interests in feminism. It doesn't dwell heavily on personal opinions but tells us the facts about how Wonder Woman has been portrayed in comics and TV in the past 70 years. Yes. 70 years. Anyone else feel old?

Wonder Woman-still not a fan but...

The book was very interesting, with a lot of thought provoking ideas. This was an assigned reading for a college course and I'm not dissatisfied. I am not a Wonder Woman fan but I do have a new found respect for her character. The narration was smooth and clear.

The Unusual History of Wonder Woman

This book was an interesting history of the comic book character Wonder Woman. She was created by the man who also created the lie detector, William Charles Moulton, who used his unconventional views and lifestyle to create a hero that would embody the wisdom of a female led society. He also imbued his creation with his sexual fetish fantasies. While this book tells of the three major eras of comic book lore, what is truly eye opening is the story of how women were depicted in the comics, especially DC and particularly Lois Lane and her relationship with the Man of Steel. A very far cry from what we see nowadays. There are a number of charts and graphs and explanations about psychology and the feminist movement. For me, these side trips bogged the book down. It was at its strongest describing how characters were depicted and the staff who were involved. It ends right before Wonder Woman returned to the big screen in Batman vs Superman Dawn of Justice and her very successful solo film.
If you enjoy comic book films and want to learn about the history of many female characters, this is an interesting read. A number of color photos of various covers are included as well. Do note there is a good portion of discussion related to bondage imagery to give a heads up.
I read this book using immersion reading while listening to the audio book. Colby Elliot handled the narration well and has a pleasant voice.

Hoping for a Second Edition

Criticisms offered by other reviewers are correct like continual footnote mentions or a distinct focus on bondage. Nevertheless, it is still a comprehensive overview of the character. The glaring problem is the omission of the 2017 film since this was published prior to its release. The author’s lamentations about her background status in the “upcoming” BvS is laughable now that she dethroned both boys to become queen of DC’s box office (not counting rival Aquaman’s haul). A second edition could greatly illuminate Diana finally getting her due.

The history of Wonder Woman is interesting and I enjoyed it.. Downside and very annoying with breaks for footnotes

Yes, you will learn a lot Wonder Woman and her creator, William Marston. You will also learn about comic history in general. Particularly about the impact of women in the comic industry. As a woman who has always had a love for comics, this book was perfect. I want to read more from Tim Hanley.

Enriched my view of Wonder Woman

I actually thought I knew something of Wonder Woman before reading this book, but this book was quite the eye opener and was presented in a clear timeline manner. Wonder Woman as a character is actually richer for me now, knowing this background. The narration was clear and well done. l don't regret taking the time to listen.

I didn’t know much about the history of Wonder Woman as I only have vague memories of the TV series and the comics passed me by.

This book did a good job of filling in the blanks.

for anyone who loves Wonder Woman, This is a must-read! If you listen to it via Audible the narrator is phenomenal.

This book is a great detailing of how Wonder Woman has changed with the times and other females in general throughout comics, both Marvel and DC. The author does list more books that he has researched into writing this book so I'm going to be sure to look into them. It is a head scratching affair when you hear how people thought back then but that's what's also fascinating about it as well. It's good that we've grown, and still are growing, from that bigotry mindset. Any person that claims to be a fan of Wonder Woman in general or has a curious mind for history, should listen to this book, and perhaps getting the physical book too since they're charts and pictures that are mentioned.