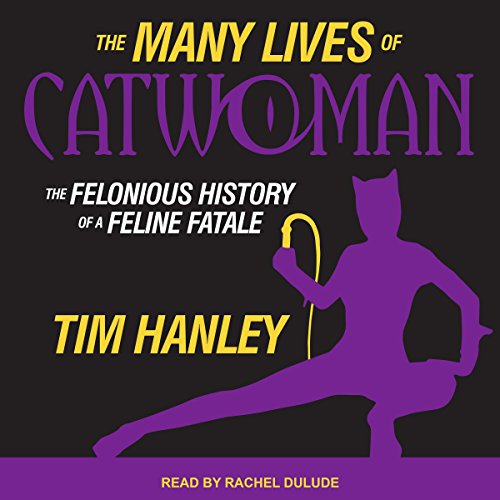 The Many Lives of Catwoman

By: Tim Hanley
Narrated by: Rachel Dulude
Try for £0.00

For more than 75 years, Catwoman has forged her own path in a clear-cut world of stalwart heroes, diabolical villains, and damsels in distress. Her relentless independence across comic books, television, and film set her apart from the rest of the superhero world. When female-led comics were few and far between, Catwoman headlined her own series for over 20 years. But her unique path had its downsides as well. Her existence on the periphery of the superhero world made her expendable, and she was prone to lengthy absences. Her villainous origins also made her susceptible to sexualized and degrading depictions from her primarily male creators in ways that most conventional heroines didn't face. For good and ill, Catwoman serves as a stark counterpart to the typical evolution of the history of women in comics, and in popular culture generally. Her adventures have charted an inimitably varied journey of empowerment and exploitation. Exploring the many incarnations of this cultural icon offers a new perspective on the superhero genre and showcases the fierce resiliency that has made Catwoman a fan favorite for decades.

"Feed your kitty now, because once you start reading, you won't be able to stop. Tim's words are as mesmerizing as Catwoman herself." (Adrienne Barbeau, actress and voice of Catwoman in Batman: The Animated Series)

What listeners say about The Many Lives of Catwoman

Interesting, well researched and well performed. A great insight by Tim Hanley into the ups and downs of one of comics stand out villain/anti heroes. Read nicely by Rachel Dulude. There are more than a few mispronunciations of comic book creators names in here, however I'm certain that is not the fault of Tim or Rachel and doesn't detract much from a great listen. Just bought Tims Wonder Woman audio book, if it's as enjoyable and interesting as this one I'll be very happy.

Another Foray into Comic Book History

Another foray into comic book history by Tim Hanley (his other being a look at the evolution of Wonder Woman). The key word here is evolution. As with Wonder Woman, Hanley demonstrates that Catwoman has evolved over time. What makes Catwoman's saga a little less coherent I suppose is that her origin myth is not as finely crafted as Wonder Woman's. Catwoman is in general a less coherent, even a less cohesive character. Her relationship with Batman is always problematic. Her status as a villain just as much. As Hanley points out, Catwoman is partly sex symbol, partly a foil. I think that a lot of the problem with Catwoman is that for a long time there never was a clear understanding of not only who she was and who she was in relation to Batman, but also who her audience was. Catwoman has a lot of fits and starts as a character, and a lot of what drives the changes have been the highly sexualized screen portrayals of the character. Hanley does a good job chronicling the erratic history of Catwoman. This is an enjoyable dip into pop history.