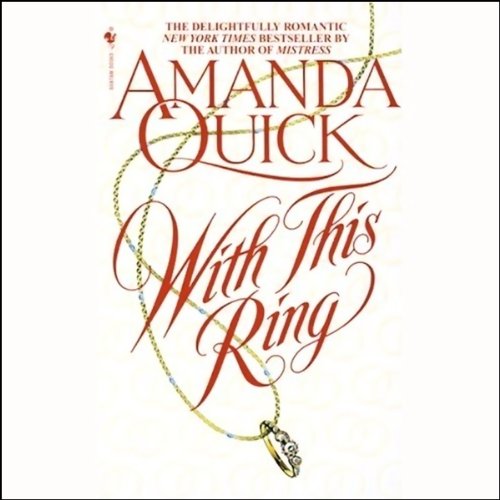 By: Amanda Quick
Narrated by: Janet McTeer
Try for £0.00

Beatrice Poole may be a vicar's daughter, but that doesn't mean she's a stranger to the darker passions. Indeed, she knows enough about gothic terrors to have carved out a highly successful career penning "horrid novels." But now the talented authoress finds herself in the midst of an ominous adventure that rivals anything she's ever written.

Her beloved Uncle Reggie is dead, Beatrice suspects that he was murdered - all because of his keen interest in a fabled treasure that may not even exist. Rumors abound that the Forbidden Rings of Aphrodite, said to give their possessor the most unnatural powers, have surfaced in London. Yet Beatrice needs more than rumors to uncover the truth. That's why she's braved the wilds of Devon to seek out a leading authority on antiquities and ancient legends: The famously eccentric, unquestionably reclusive, possibly dangerous Earl of Monkcrest, a man believed to dabble in the supernatural.

But bearding the Mad Monk of Monkcrest in his den and dangling the possibility of uncovering a fabulous artifact before him may be the biggest mistake of Beatrice's life. For suddenly, she finds herself joined in an uneasy alliance with a man who is every bit as fascinating as one of the heroes in her novels.

What listeners say about With This Ring

we want the unabridged/Barbara Rosenblatt version

This abridged version and this narrator don't do this book justice.

Wait for Audible to offer Recorded Books' wonderful versions of this and other early Quick books. They're funny, fast-paced, and charming.