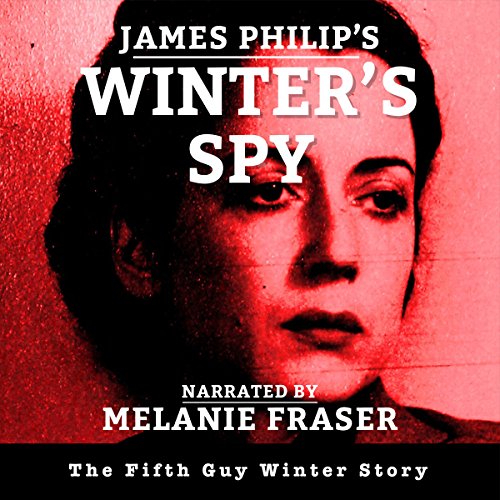 The fifth full-length installment of the Guy Winter Mysteries series, Winter's Spy is set in November 1940.

In Winter's Spy, the Mystery Man is under arrest, suspected of having been an enemy agent for his whole career in the Metropolitan Police and throughout all his years working for MI5. Dammed by the evidence of a German spy whom he encountered in Paris before the war, it seems as if he must literally fight for his life.

Then, transported to Camp 020, MI5’s South London interrogation center, and confronted by his accuser, the Mystery Man begins to suspect that nothing is quite what it seemed.

Is he trapped in a web of deadly intrigue?

Does a beautiful spy hold the key to the greatest secret of the war?

And can MI5 and the Metropolitan Police suspend hostilities long enough for Guy Winter to finally unearth the key to unlock the Ripper case?

What listeners say about Winter's Spy

Another exciting story from the Guy Winter series. It follows on from book four, Winter's Return, and indeed threads from earlier books are pulled together to answer long awaited questions. It's a tangled web of intrigue, murder and espionage. It's quite an intricate story line and I got a sense of how complicated and dangerous the political scene was at the time for those involved in the war effort and espionage business.
You do need to be familiar with the characters and the story lines of previous books. I recommend reading the series in order and in its entirety.

Again the narration is excellent from Melanie Fraser. The accents were very well done and the subtle sound effects were very effective in setting the scenes and making the experience the story more dramatic.


I voluntarily reviewed a gifted copy.

In this fifth book in this series Guy Winter is arrested and questioned as if he had something to do with spying .
This series just get more and more interesting and although the subject matter of this story is not my normal I will admit that I thoroughly enjoyed it.
It is well written and the narrator has really done a splendid job of helping to bring it to life. I was thoroughly entertained and am really looking forward to the last in the series.
A free copy of the audiobook was supplied at my request.

A quick and interesting story.

Where does Winter's Spy rank among all the audiobooks you’ve listened to so far?

What other book might you compare Winter's Spy to and why?

The Narrator did a good job and handled the various characters well.

The story will hold your interest for the entire length of the book.

Received the book on request for an honest review.

Intrigue, Secrets, and a Ripper Copycat


This is the third installment in the Winter series of books, the second full-length audiobook, and my favorite, so far. I can honestly say that at this point, I’ve become very fond of the characters and look forward to learning what awaits them in the rest of the series. With the Blitz underway, I’m concerned for everyone’s safety. This book includes a few close calls; I won’t say more in order to avoid spoilers.

While I’m thoroughly enjoying this series, I do find, at times, that the descriptive portions can become a bit much, and my attention wanders. I then need to go back and rewind and re-listen. Still, it’s a highly engaging tale of life in WWII London, Scotland Yard, and MI5. Unexpected developments constantly caught me by surprise. Make no mistake, this is a dark, noir-like story that continues from book to book through the series, though resolution for each book’s specific events is offered..

The narration is excellent. Ms. Fraser offers a smooth rendition of the story, with distinct voices for each of the characters. She also offers near pitch-perfect emotion as required for each scene. I suspect if it were not for her performance, I might have abandoned this series, but I happilyawait more.

If you’re into 1930-40s war related detective tales, this series might be for you, though I think it’s important to point out that you will likely need to listen to the books in order so that you come to understand the characters and their histories.

I received this book as a gift from the narrator. Her generosity did not influence my opinion of this book, or the comments I made in my review.

I received this audio book free of charge from the author in return for a review.

This audio is the fifth installment of the Guy Winter Mystery Series. As I listened I thought that a good subtitle would be "Will the real Vera Shellberg Please Stand Up". The plot revolves around two female spies who have played the of Vera in order to keep the spy Operation Viola under wraps. This book has so many plot twists and such involved espionage that you really have to pay attention or you will get lost, especially in the first half. The second half of the book answers a lot questions and neatly wraps up the identities and roles of the two women and how it all relates to Guy and his ripper mystery.

A very involved book with an amazing plot. I hope there will be more installments to this series.

Best book of the series so far

This was probably my favorite Guy Winter book in the series so far. I felt like I was able to get a better grasp of the characters and their relationships in this book. Everything seems to be coming together from the previous books in the series. The atmosphere in this book is really rich, and you definitely get a feel for WW2 England. I listened to the Audible audiobook narrated by Melanie Fraser. Her narration is excellent - she is probably one of the best narrators I've listened to. Her voice and tone have such great range. She really brings the story to life.

I received the audiobook free in exchange for an honest review.

One thing a little off-putting with James Phillip''s writing is the amount of detail in the story. Now, I like detail in my books, but sometimes, unless you are really paying attention, you lose the plot, so I wouldn't listen to this if there's something to distract you from listening.

A woman, Vera, is detained by M15's B5B section trying to determine whether she is a spy. This is the basis of the book. Among the many threads that are being tied up in this last book, is who/why someone attacked Helen Chase and killed the people she was with; who was killing aka the Jack the Ripper murders, and who Vera is and who she is working for. Add in the strong characters of Kate Ransom and Elspeth Winters helping out the War Effort, and their husbands, and you get a good story. I try not to spoil reviews with answers and spoilers, so I say no more.

The entire series was a joy to listen to, but I'd suggest listening to the series in its entirety a second time to really get the nuances of the plot and find things that you might miss the first time .... what a great reason to re-listen to Melanie Fraser's narration.

The fifth book in the series.
Wartime mystery and intrigue written and narrated to such a high standard that makes you feel as if you were there.

I can't imagine this series narrated by anyone other than Melanie Fraser. She captures the feel and emotions of wartime Britain.
I was given this free review copy audio book at my request and have voluntarily left this review.

This is another interesting and very entertaining story in the Guy Winter series. The feel of London during WW2 and the uncertainty of the outcome of war comes through well in this story. There is Intrigue, deception, old relationships that come back to haunt and a tangled web of lies, even Guy is suspected of being a spy, in this story. Once again the narrator really brought the characters and the story to life. She did an excellent job with all the different accents and brought out the emotions in the story well. The characters grow in depth with each book, revealing different facets to their personalities and relationships, and the subtle complexities in the plot are great. I will look forward to seeing just where this story goes next.

the book was incredible I loved it very much the storyline was a bit quick and the things happened fast but I did love it you felt like you're never bored I loved loved loved this book
I was given this free review copy audiobook at my request and have voluntarily left this review."

I enjoyed the imagery in this book. Having met a real life spy who served in WWII, this book had really appealed to me. The author wrote some very realistic imagery with the bombed out city, driving with the lights off, winter gardens, and the suspicious reactions to strangers. I liked the reference of dark veil to sunshine, and how the various political currents kept changing. MI5 and MI6 didn't even seem to share the same goals. The spy's working for more than one agency was interesting. Being a prisoner of their fears was a unique concept. I really enjoyed the narration on this book with the various European accents. I requested this review copy audiobook and have voluntarily written this review. I found it interesting to hear the relationship of Scotland Yard to MI5 and various other agencies.