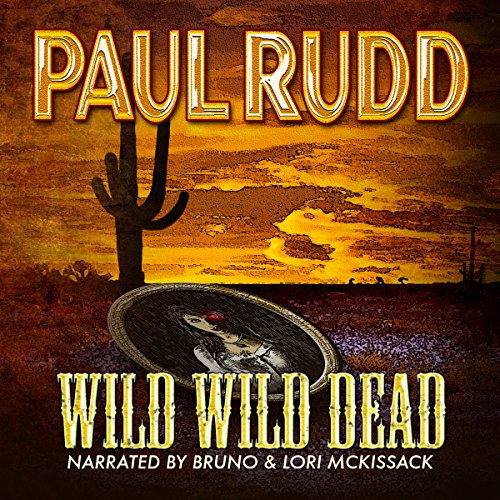 By: Paul Rudd
Narrated by: Lori McKissack,Bruno McKissack
Try for £0.00

Nathaniel Wayland is tough as an old boot and smokin' fast with his guns. The West has been wild as long as he can remember--not because of outlaws and bandits but because a plague is turning humans into an army of undead walkers.

This plague is beautiful, sexy, her skin velvet smooth and her voice even softer. Evil has a way of seducing a fool and charming the wise; this one does both. Wayland grew up an orphan, his first memory being of the attack that left him homeless and alone. Nightmares stalk his dreams, and opium and alcohol numb the pain in daylight.

Munroe is the mentor who took him in and taught him right, teaching him to be a ruthless killing machine with one objective: save the West from this horror. Wayland's inner demons are loud, his lust for willing women and aged whiskey vices he can't control until a band of outlaws enters his life, forcing him to man up and showdown.

There's a massacre at Hollow Creek. Valiant men fall in a final stand against the queen of the essence, and when Wayland decides to be a martyr, he is delivered from evil in a way no one will expect.

Compelling and dramatic, this Western has intelligent zombies, corrupt lawmen, sociopaths, evil, and outlaws, taking you on a gripping listen with black oil, seduction, power, and dark horror. The West has never been this wild, deadly, or sexy.

What made the experience of listening to Wild Wild Dead the most enjoyable?

Id say the audio quality. its not hard on the ears and thats great since i listen to most books with headphones

What was one of the most memorable moments of Wild Wild Dead?

I loved the prologue, i love a good origin story.

What does Lori McKissack and Bruno McKissack bring to the story that you wouldn’t experience if you just read the book?

Fabulous performance. They brought the characters to life with amazing quality and talent.

I work long shifts and having something to listen to during a long day realy helps. and this was a blast

Would you consider the audio edition of Wild Wild Dead to be better than the print version?

Yes i enjoyed it immensely

What was one of the most memorable moments of Wild Wild Dead?

I enjoyed the shifting that filled in backstory

I enjoyed the entire book

Great book and great performance by the narraters

enjoyed story and performance very much

Story is awesome, great listen and writing is fabulous. Bruno and Lord bring the story to life

I don't normally leave reviews. I've listened to a lot of books over the years. but sorry to say this narrator just could not keep me listening. his voice just does not match the storyline at all. I finally just gave up. The story itself seemed okay, I may actually read the book to finish the story.