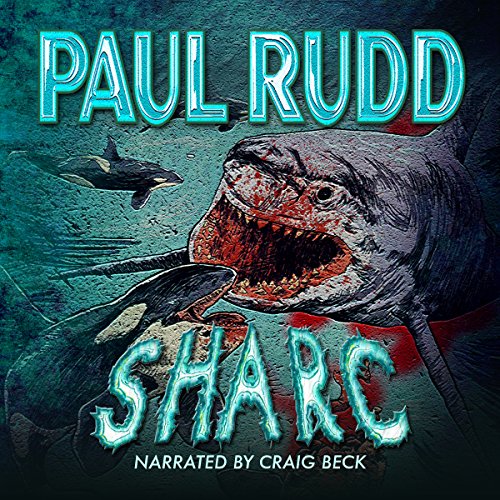 Dramatic upheaval ensues when the world's largest prehistoric shark escapes captivity. Men put their lives in jeopardy to capture it, the press is getting in their way, and time is running out. In this non-stop adrenaline surge of action, anger, and fear, the first floating aquarium is the scene of unprecedented carnage.

Maxwell Baxter is intent on fulfilling his greatest ambition yet. In the midst of international financial negotiations to raise money to complete his ARC with the Governor of California being entertained on his private yacht , the Megalodon terrorises everything in the Pacific, no matter what their size.

The world is watching them fail at their quest, but swimming with sharks has never been more perilous or drenched in suspense.

What listeners say about Sharc

I was provided a free copy of this book in exchange for an honest review.

I've always liked sea monster stories, be it dinosaurs, sharks or giant cephalopods and so I was looking forward to this one.

The first thing I'll say that I liked is that the book is presented almost entirely from the human point of view. A few books I've read have scenes from the creatures POV and it never works as it humanised something that should be a Michael Myers of the ocean, striking suddenly and unseen. Here we witness the many deaths and destruction from a wholly human perspective and it works so much better.

Also, the author does away with extrenuous threats, so there are no spies, no pirates or gun runners impeding our heroes and so it fits more I to the world as we know it and it is all the more scary for it.

Speaking of the heroes, I really liked the majority of the cast but there was an awfully big cast to follow and, while he does a great job at narrating the book, there were simply too many for anyone to be expected to offer a distinct voice to each one but things would've been much worker without such a good reader! While they're not all hugely deep, it is always a brave move by the author hen people you view as indespensible or central can end up fish food and more than once I was shocked by this happening.

So yeah, a really good book with some awesome gore, a real sense of dread and threat and some very bribe moves. Highly recommended to lovers of undersea horror.

This book had me from the moment the blurb mentioned giant, killer shark. There are not enough books about them, well good books and this book is just absolutely brilliant!

Yes, this is going to be fun was my first thought but it wasn't long after starting it I realized I was genuinely tense, waiting nervously to hear who survived the next attack. I quickly came to care about all of the characters and was really sad when some of them died.

It reminded me of all my favourite aspects of a classic 'creature feature' and I can just imagine someone like Netflix picking this up and making it into a brilliant film.

I am super excited for the sequel later this year!

I enjoyed this audiobook immensely! I enjoyed it so much that I immediately went and brought book 2. Both the author and narrator are new to me and I highly recommend them. Not only is the book well written the Narrator really bring the the characters to life.

I highly recommend this book anyone that loves this genre. Let the author and narrator lead you into this underwater adventure!

An edge of your seat ride from start to finish.

Not being much of a reader at all, someone recommended this story, that is outstandingly written by Paul Rudd, and also narrated wonderfully well by Craig Beck, giving it a go on audible was a great idea. The story flowed from beginning to end with highs and lows for the characters, no spoilers but there is a shark in it, so it doesn't end well for some. The narration was brilliant as he adds accents and tones to the characters that make it feel so much more impacting and the writing is so detailed and descriptive that you can picture it as easily as if it was a film on the big screen. Overall, thoroughly loved it and going to give audible a go with a few more books. Makes the drive to and from work much more exciting. Many thanks and can't wait to get my teeth into the sequel, Sharc Bait.

Forget about Jaws this is the daddy. A fast moving story with great characters and plot. Listened to it one sitting. Great narration too, really brought the book to life.

Would make a good movie.

Enjoyed very much. Narrator had a nice clear tone but maybe spoken with haste and with the exception of his charactor of mayor which was poorly done all others were enjoyable.
Certainly had excitement , chase and kill. All of which I require in a good listen. I will purchase more from this author.