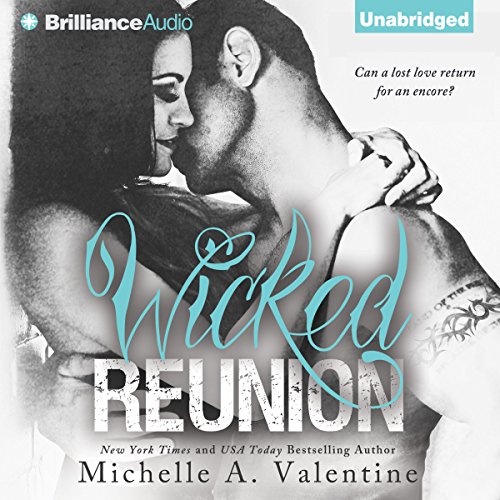 By: Michelle A. Valentine
Narrated by: Scott Merriman,Natalie Eaton

College sweethearts London Uphill and Jared Kraft were inseparable. He was a rising baseball star with a promising future, and she seemed destined to become "Mrs. Kraft". Then a tragic night and a series of devastating mistakes caused Jared to walk away from his life, leaving London without any explanation and tearing the couple apart.

Five years later, Jared has reinvented himself by putting down the bat and picking up a guitar to play for the red-hot band Wicked White. In all that time, London hasn't gotten over her forever love - or the pain - despite seeking solace in the arms of the one man no one dreamed she'd run to.

When Wicked White's lead singer goes MIA, Jared finds the time - and courage - to return to his hometown and face the mess he made. He's shocked at how London's life has changed, yet he's determined to prove their love is worth fighting for. Is this breakup too big for any hope of a reunion tour? Or can London open her heart to Jared once again?

do not buy waste of credit I warn you

he leaves her dumps his family when his dad dies leaves his bro mum girlfriend girlfriend then sees him having intercourse a girl and 5 years later omg this girl begs him back I warn you this book is bizarre and mentally thought up by a 6 year old who has not a clue........will not be seeking out this wrighter

Where would we be without second chances especially when it comes to the love of your life, your soul mate and the only person you'll ever love? Well we'd be in London and Jared's shoes because, even though they'd loved each other since childhood and had pledged their undying love to each other, a cruel and heartbreaking series of events shattered their dreams, their hopes, their planned futures and tore them, and a family, apart. And, for five long years, they lived very different lives, tried to move on but lived each day remembering each other and what was lost.

London was so in love with Jared but, in one night, the devastating news his family got changed him..... and the cataclysmic fallout shattered lives, ruined promises, broke hearts and changed futures because he alone was responsible for the self-destruction, despair, damaging actions and reactions that followed. Jared couldn't cope with his grief so shut down emotionally, joined a Rock Group and disappeared from everyone's life..... except a random call here and there to his Mom every once in a while. Now he's a semi-famous Musician and London's a Teacher but he's unhappy and returns for a quick visit to his hometown where he thinks nothing has changed.... but it has - London is just ending a three month marriage to someone very very close to Jared and the news will floor him.

Accidentally finding himself on London's doorstep he wasn't prepared for the instant chemistry, the instant longing and the instant rush as his feelings for London burst free from their shallow grave. But, just as they were getting reacquainted, an unwanted male visitor knocks on the door and it will eventually send both men to Hell and back. Because the future will have angst, drama, a vicious verbal volley, a temper driven fight, pain, bloodshed, heartache, tears, loss and a nasty twist of good news will have a profound effect on them all. Someone is giddy with joy, someone feels sad and alone, someone must sacrifice love, they all have a deep longing..... but eventually everyone will fear the worst. So, this time, when the going gets tough, will Jared man up, stick around and fight for what he wants..... or will he just walk, or run, away again?

This second chance love story is told in 'then' chapters which slowly explains their heartbreaking tragic backstory while the 'now' chapters reveal the mood, feelings, actions and current situations of all characters involved. I did think this was an enjoyable listen but I had a couple of issues with it..... London's reactions, when Jared walked back into her life, was weak, unrealistic and I would've made him beg for forgiveness even if he's handsome, tattooed and buff. The reunion was a bit anti-climactic IMO, and it felt more like a pop than a bang. The second issue I had was the 'other man' who I felt desperately sorry for. There was a fast paced sex scene. Dual POV's, Scott's narration was good but (my apologies) because I did think that Natalie's voice was a wee bit too girlie and sweet.

Worth a credit? This question isn't an issue because it was well under $10 so I just bought it and saved the credit for a costlier listen.

I really do not like the story she has really low self esteem. She has to move on. He should of move on too. Not a great story but since I pay for it I force myself to finish it

This author will use all of your emotions in reading her books. She loves to put you on the fastest roller coaster ride in the park. You know the one. It has dips, 3 upside down q's, twist, turns, & all the Rock n' Roll action you will ever need. She will keep you guessing at every turn. I swear there were times when my stomach ached because I was afraid to see what was going to happen next but, couldn't read fast enough to get to the next part. Sometimes I would almost put the book down because I thought the characters were not going to do the right thing. Then another twist would come up & it was all good (well except when it was sad). Read It!!

Couldn't finish it. The characters are so unlikeable that it's making me mad. The H is a whiny, arrogant, selfish, self centered, self serving pr**k. I can't stand him. The h is a doormat. Not wasting my time on this bs.

Way too much backstory

I get that we need to know how events have developed to the point of current life but almost this entire book is backstory. It would have been so much better if we had more story of the two main characters dealing with fallout and current life. It was annoying

I'm not sure I would recommend this book to lot of friends. I didn't enjoy the ending of this book.

I think there was too much drama at the end. At first I loved the book and enjoyed listening that, but in the end the was way too much drama FOR ME. I know people who love this kind of drama.

Have you listened to any of Scott Merriman and Natalie Eaton ’s other performances before? How does this one compare?