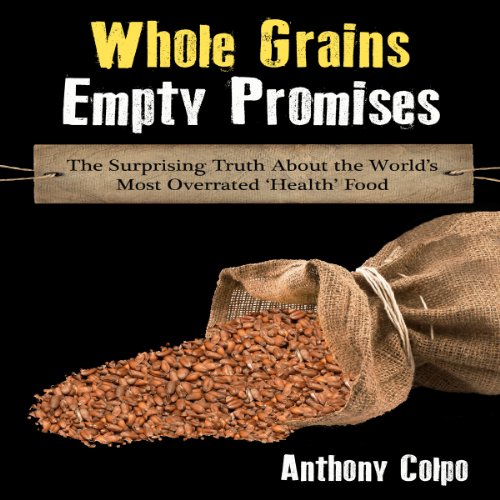 For nearly a decade, Colpo has been slaying nutritional dragons and diet gurus with his scientific rigor and the unapologetic truth in a way that could almost be considered a martial art. In this book he examines the pervasive belief that whole grains are both healthy in general and healthier than their refined counterparts.

The verdict? No they're not. And the foundation upon which the belief that whole grains are healthy is built will shock you!

In the book you'll learn that you may be giving yourself arsenic poisoning with all that brown rice you've been eating, depleting your body of valuable minerals with your whole grain bread and porridge, and otherwise torturing your bowels and taste buds with spoonful after spoonful of empty promises.

Listen to Whole Grains, Empty Promises and decide for yourself if whole grains are really all they're cracked up to be.

"Anthony Colpo, a maverick ‘independent health researcher’ like myself, has always been after my heart with his irreverent, entertaining, and cutthroat writing style. In this book he reminds us all that no matter how ‘ingrained' a nutritional belief may be amongst nutritionists and the general public alike, it often stands atop an enormous mountain of fragility-or in this case a pile of sh*t." (Matt Stone bestselling author of Eat for Heat)

The ideas and facts presented are interesting, but he doesn't go far enough. He tells us why whole grains don't live up to their reputation, but doesn't offer any real information about what to use as an alternative.

He doesn't say if there is anything that has been definitely shown to help with diverticulitis or that offer any of the other purported helpful benefits of whole grains. I learned quite a lot about whole grains, including the anti-nutrients in them and arsenic in rice, but would've liked to hear what he recommends instead.

In addition, the sarcastic tone of the author can be a bit overwhelming. If you aren't ready to hear this negative news about whole grains, if you are a whole grain believer, then his tone isn't gonna win you over and keep you listening.

In addition, it's odd to hear an American narrator using Australian slang. Might've been better with an Australian or UK narrator.

Anthony reinforces what I have heard about whole grains in a very entertaining and informative way. Very enjoyable listen.

I just didn't get into this read. The message is good, but the presentation is bland.

I'm changing up my diet a bit after listening to this. Minimising grains in general, particularly whole grains, soaking and cooking oats, and increasing veggies. Going to monitor digestion and energy for a month. Very interested in the results.

I am particularly interested in this subject because I am one of those who was duped for almost ten years into trying to be "healthy" by eating whole grain everything. Brown rice: check. Baking from scratch with whole-wheat freshly-ground flour: check. And after years of that my health was crappy, my skin was bad, my hair was falling out. I've read several interesting articles on blogs since then that have led me to believe that whole grains blocking absorption of fats and minerals in my system has been a huge contributing factor in my downward decline. I was hoping to get more clarity on some of those things in this book, but I don't know that I got any new information for me personally. If you've never heard anything about the dangers of whole grains, this would probably be helpful for you; however, I think a well-written blog post could deliver the same amount of information and I don't know that it warrants listening to an entire e-book.

Who would you have cast as narrator instead of Matt Stone?

I'm a big fan of Matt Stone and have enjoyed listening to him on many podcasts. But unfortunately, the audio on this one did not work well for me. Matt read very quickly and it made it hard to absorb the information he was delivering. A lot of it was very technical in nature, talking about graphs and studies, and I kept thinking that I would enjoy it a lot more if I could look at what he was talking about and see it for myself. I don't know that this type of book translates well to audio.

I also felt that Matt may have "over acted" on some of the parts and it distracted me. I could hear his enthusiasm for what he was reading, and could tell that he agreed with it, but there were some parts that came across as overly facetious.

This book isn't very expensive, so it might be worth checking out for yourself if you're interested in this topic. It contains some good information that I do agree with, but the overall listening experience was a little tedious.

I enjoyed this book, although I thought the tone was snide, and even a touch hostile, to an unnecessary degree. That said, I believe the content is important, and I think the author really dedicated himself to a great deal of research in order to find out the truth concerning whole grains versus refined grains. There are many health nuts out there who believe that they're going to simply keel over dead if they ever eat a morsel of food containing white flour -- I used to be one of them. Over time -- and this book helped -- I've come to understand that such rigidity is completely uncalled for.

Also, Mr. Colpo states that consuming foods made from cracked grains results in a lower GI score than eating foods made from wholemeal (e.g., flour-based products). I wonder what the reasoning is behind this? Does that mean eating whole or cracked grains (aside from brown rice) is better for you than eating the wholemeal flour of the same grains? And if so, is there a correlative increase in nutritive value such that it would be beneficial to eat cooked/steamed whole grains (like porridge)?

Overall, a good book that would provide dietary balance for many of its readers.

What did you love best about Whole Grains, Empty Promises?

I love how he didn't just refute the current statistics with more statistics but pushed the reader to question how the information was used.

Which character – as performed by Matt Stone – was your favorite?

The guy obsessed with poo.

Yes, finally understanding the flaws in nutrition research. This book has not only lead me to question whole grains but all statistically recommended foods.

Overall, I'm not a fan of the snarky comments but the content to me was important enough to ignore them. I enjoyed this book and plan to read some more of Colpo's work.