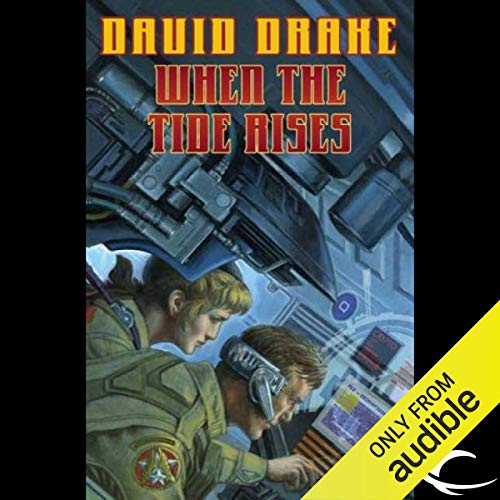 When the Tide Rises

By: David Drake
Narrated by: Victor Bevine
Try for £0.00

When the Republic of Cinnabar doesn't have enough battleships to deal with all the crises in its war with the Alliance, it sends the next best thing: Commander Daniel Leary and his friend, the spy Adele Mundy. This time they're off to help the Bagarian cluster in its rebellion against the Alliance, but they'll quickly find that the worst threats to the rebels are the treacherous politicians leading them.

Leary and Mundy use electronic espionage, sub-machine guns, and shipkilling missiles to outwit political rivals, put down mutiny, and capture an Alliance fortress. When all else fails, they'll strike for the heart of the Alliance, and then throw their tiny corvette into a major fleet action.

What listeners say about When the Tide Rises

great performance, great book. there aren't many bad David drake books and this definitly isnt one.

Not Sure How I Got This Far in the Series

The obsession with violence and psychopathology seems to have grown, or I just missed it in earlier books. It was tiresome and depressing. Also, getting pretty tired of hearing how the main characters 'smile' in different ways in response to events. The writing has either degraded, or I suddenly woke up and noticed how bad it is.