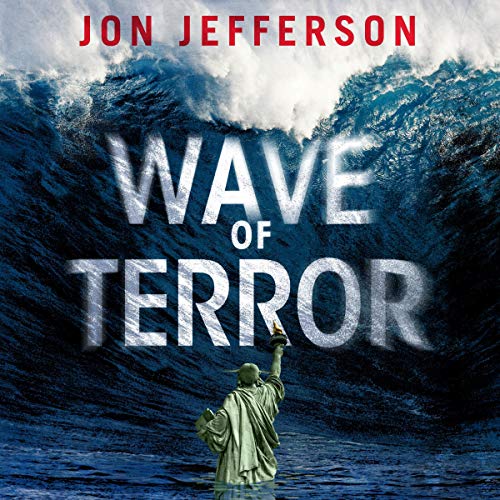 An unthinkable terrorist plot: The earth is shaking. The clock is ticking.

Astronomer Megan O’Malley sees things on a cosmic scale - hidden planets, colliding galaxies, imploding stars deep in the universe. But this time, she’s sensing something much closer to home. And she can feel it underfoot, too: explosive seismic shifts along a geologic fault line that could unleash an apocalyptic disaster. O’Malley also discovers something even more terrifying: the cataclysm is intentional. Someone is determined to trigger a mega tsunami.

FBI Special Agent Chip Dawtry is a big-picture guy, too. He lost his brother on 9/11, and ever since, he’s focused on preventing the next massive terrorist attack. Now, it isn’t hypothetical - it’s unfolding fast. But only he and O’Malley see the peril.

When O’Malley vanishes, Dawtry races to find her. It’s up to them to stop a 150-foot wall of water ready to roil - and wipe out America’s Eastern Seaboard. Each new terrifying rumble means it may be too late.

What listeners say about Wave of Terror

I struggled to finish this.
Clunky story
Bad dialogue
Bad accents for the characters.
Sorry.

A Hollywood Movie Of A Book

As mentioned in my title, this was a Hollywood movie type of book. I mean that in both the good and the bad. In the good, this was a fast-paced no-holds-barred type of a book that really went high-octane with the action. The bad was that there was a lot of typical “cutesy” stereotypes along with some of the typical action-movie “I fall in love with everyone I see”.

Wave of Terror follows an astronomer, Megan, who is searching for Planet 9 (not Pluto). She is given access to an incredibly accurate telescope in the Canary Island. When searching she realizes that things aren’t exactly as they seem. She happens to trip into a terrorist plot that no one in the United States seems to believe.

This was definitely a book that I would enjoy as a movie. I think that they could do a lot with this plot and it almost feels like Jefferson wrote it in a way that it could be easily turned into one. The dialogue is well thought out and funny (especially later in the book). The interaction between Megan and Chip was definitely memorable and full of movie quotes. Those parts definitely made me chuckle while reading.

The story itself felt… plausible. It didn’t seem super far-fetched but it wasn’t totally like “oh god this definitely could happen”. Though that being said – it was a unique and different approach to the terrorists trying to take down America. It was something that I didn’t think of before and it wasn’t as far-fetched as the movie “Geo-Storm” for example (which, I did enjoy more than most people).

The narration for Wave of Terror was done by Amy Landon – I’ve never listened to her narration before but she made this book a breeze to listen to. I thought she added some nice drama where needed without taking away from the storytelling aspect.

Overall, Wave of Terror was a fun “lose yourself” kind of book. It definitely was an easy read that was full of international intrigue and fun action.

I was voluntarily provided with a free copy of this book. It has not affected my review in any way. If you enjoyed this review, please vote for it! Every vote helps.

Storyline was very good. Narration was OK but the woman narrating basically had a lot of trouble from my perspective with male voices they all sounded like the protagonist with a nasal problem

Ok. Did not get through half of it. Too long and difficult descriptions Mar it's plot

Narrator is too breathy

Good story-
could have done without the many voice inflections if the breathy narrator. The story kept me interested enough to finish.

way too much corney romantic crap

I just pulled the plug on this one. started out interesting then turned into one cheesy line after another in situations that I just wanted to end so it could get back to the story then I realized this was the story, there wasn't anywhere else to go. I had to call it quits.

An adventure story that could be from todays paper

A terrorist plot discovered by accident that threatens not only America but a large part of the world. The plot itself could have been pulled from extrapolating a few news stories on the evening news. Yes, it's all within the realm of possibility.

That said the characters are likable and have a fun chemistry. If they have another adventure, I would not mind tagging along again.

All in all...a good listen/read.

One drawback...the narration. It was distracting. While I applaud Amy Landon giving it her best shot, she did not convey the male characters very well I am afraid. It was rather difficult to differentiate the different male characters if there was more than one speaking in a scene. And they all sounded...off. It took me a while to pin it down, but I finally got it. They all sounded like a variation of Keanu Reeves in one of the Bill And Ted films. That kind of kills the suspense...at least for me.