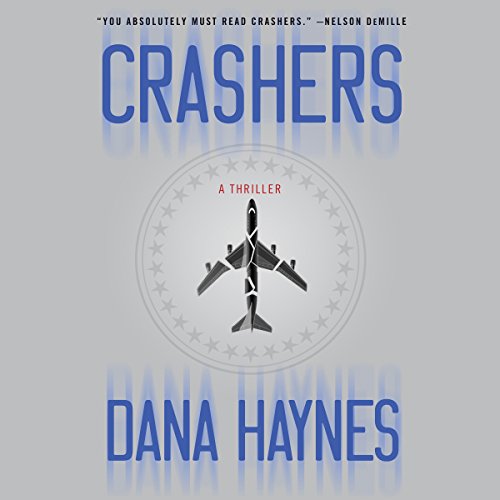 By: Dana Haynes
Narrated by: David Ledoux
Try for £0.00

Whenever a plane goes down in the U.S., a "Go Team" made up of experts is assembled by the NTSB to investigate. Those people - each of them a leading expert in a specific area - are known as informally as "Crashers".

When a passenger plane, a Vermeer One Eleven, slams into the ground outside Portland, Oregon, a team is quickly assembled to investigate the cause. Under the leadership of the IIC (Investigator in Charge), Leonard "Tommy" Tomzak, a pathologist who recently quit the NTSB who also happened to be in the area when the Vermeer One Eleven went down, the team gets to work as fast as possible. Assembled by Susan Tanaka, the inter-governmental liaison from the NTSB on this crash, the team includes a variety of experts with highly specialized skills. Usually the team has months to determine the cause of a crash, but this time it's different. This time, the plane was brought down deliberately, without leaving a trace, and this was only a trial run.

In L.A., Daria Gibron - a former Shin Bet agent, now under the protection of the FBI - spots a group of suspicious-looking men. Missing her former life of action, she attaches herself to them only to learn that, somehow, they were responsible for the plane crash and are preparing for another action. While her FBI handler tries to find her and save her, Daria risks her life to try to get close enough to learn what's going on and thwart the coming terrorist action. But time is running out and her cover story is running thin.

This is a fresh and utterly compelling thriller, an original mix of action, investigation and a brilliant cast of characters that grabs the listener in the way few novels can and fewer do.

What listeners say about Crashers

Dana Haynes has created a memorable cast of characters in this fast moving thriller set in and around Portland Oregon. He brings in some truly bad bad guys but for me the real fun was in finding out how the crash investigators coordinate all the myriad parts of a crash site into a single "cause" for a plane crash. David Ledoux does a great job of creating voices for all of the many characters in the story which was a big help given the large team of "crashers" cops and villains who populate this story.
No Fear of Flying here- just a good time and a good listen.

Not Bad at all

Other reviewers have noted that there are parts of the story line that stretch belief. That's true. In essence, there are two stories that intersect with the crash. The story of the crash investigation is superb. I learned quite a bit about the crash scene investigations and there are lots of exciting and believable moments tied up in that part.

To me a book is good if I know I'll enjoy listening to it again in the future. Crashers is one of those books.

there were some good parts

The narration was very good and the way the crashers pieced together the cause of the crash was cool. The book was actually very good until the end, where the plot became more unbelievable than a very bad imitation of a james bond movie. I hate to give such a low rating for what amounts to about 1/4 of the book, but in my opinion a book isn't much better than its conclusion.

Well worth the listen.

This was an enjoyable listen. The narrator jumped effortlessly from one character to the next without a problem. As I reflect on the book, I think of the many different characters all individually and that's a sign of a good narrator.

I’m half-half on this one.

I liked the Air Crash Investigation angle, yet hated the Irish Terrorists angle. Nevertheless, I am in for Book 2 in the series: Breaking Point.

Not a very helpful review – sorry!

Crashers started strong with interesting characters, a good story line and great narration. I was immersed in the story until it took a sharp dive into the land of make believe. It became so unbelievable about 2/3 of the way through that the last hour I just listened out of a sense of duty to finish the book. I'm disappointed that a tantalizing premise and dynamic narration was wasted on such an implausible finish.

My new favorite action, murder, spy writer! Details were superb. Cannot wait to read the next one! Judy