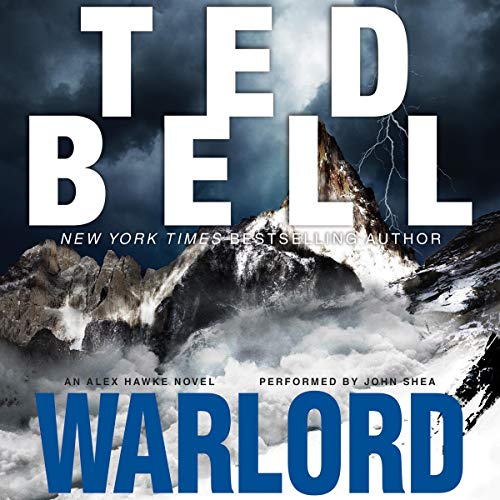 Alex Hawke has all but given up on life. The British-American MI6 counterterrorism operative lost the woman he loved almost a year ago and has sought refuge at the bottom of a rum bottle ever since. But late one night at his home on Bermuda, he receives a wake-up call... literally.

His Royal Highness Prince Charles, an old friend, desperately needs his help. The prince has discovered a not-so-subtle threat directed toward the British royal family. What’s more, the evidence reveals an ominous connection to Charles’s godfather, Lord Mountbatten - the beloved family patriarch assassinated by an ingeniously designed bomb 30 years before. A shadowy figure from the past has the British crown in his sights, and has proven once before that his warnings are not to be taken lightly. Several clues point to IRA involvement, but the authorities have little to go on and answers are scarce. This is just the call to duty Hawke needs to get back into action - if the madman doesn’t strike first.

I do not normally leave reviews but this audio book is so poor it drove me to the keyboard.

The characters are totally unbelievable,the narration is awful, although I will give John Shea a by ball due to the appalling drivel he had to work with. It is obviously written by an American for an American audience as everything historical is explained in detail (often inaccurate) in a manner you would tell a child, assuming no knowledge of anything. The flimsy plot line makes you cringe and the description of action is unrealistic and boring. The main character, modelled on James Bond apparently is supposed to be 33 yet he is made out to be the life long friend of a series of characters who are all pensioners and everyone in authority is a lord or rich country gent.

This was all in the first two hours. I gave up when I had an overwhelming complusion to throw my Ipod out the window.

Maybe I have missed the joke with this book,maybe I gave up too early, I dont know,all I have to say is, do not waste your money or a credit on this rubbish.

Ruined by the reader

This is my 1st (& probably last) audiobook as it was ruined by the American reader pronouncing everything in ‘American English’.
I winced constantly throughout the book and was grinding my teeth throughout.

This book is in the style of a Jack Higgens/Sean Dillon story. The American narrator made a good effort but one or two elementary errors let him down.I listened right to the end while in the car but couldn't recommend it.Apart from the interesting idea of reattributing a series of past events to a new evil mastermind it is very stereotyped and there are no realistic characters.

This book was one of my favorites even though the suspension of disbelief must be pretty high, this book & 'Pirate' are not bad & 'Tsar' rounds it out to the top 3 I think in the Bond Wanna-be books... Stokley is still the coolest character, any large special forces black man the size of an armoire with an extremely funny sense of humor. Since all the Hawke books are average comparable speaking to most other books of this Genre I'm going to write a small spoiler, I would borrow 'Tsar' from the library just to hear John Shea's voice for Vlad Putin & the conversation he has with Hawke in Energetica

This book is not bad because its the book that comes right after 'Tsar' & how he ends up coping with what happens in that particular book & what it takes to get him back in the saddle or his Aston again... seriously, some people say he's not a bond wanna-be? The only reason he isn't is because he needs the other characters to get his jobs done, everyone from the family butler since he was a child, to Stokley Jones, to Harry Brock, to Congrieve... The concept of this book is OK although I don't think it would ever happen with the type of security a country like England has nowadays... Also the way America just trusts him is takes some suspension of disbelief because America is all about its own, it doesn't want a James Bond it wants a John Rambo lol...

The book does reveal where Hawke gets his hatred towards certain people & his past regarding his family & what happened to them... so if u were wondering about that, its revealed in this book, I would recommend this book for purely entertaining purposes... u will not venture into ur inner thoughts or give u a smile for revealing what family is all about... its a James Bond like book that will end like they all do... Hawke lives by the way *** spoiler lol ***

The plot is simple and entertaining but sometimes the author makes it difficult to follow by sudden jumps from past to present. For this type of novel, some situations are hard to believe as plausible, but is good reading. The narration by Mr. Shea was excellent.

I am a huge fan of this series. Im sorry the first book is not on audio tape ("Hawke"). I highly suggest this book first before listening to the audio tapes in order. It will add much to your listening pleasure and understanding. That said, I was as entertained as always with this newest offering. Warlord is my ulltimate fantasy. Alex Hawke is a character I would definitely not mind knowing in real life-handsome with charisma, insanely rich, adventurous, etc., etc. John Shea does an excellent job of narrating this book. I can't believe he isn't British. He really does a great British accent. Ambrose and Hawke sound like the real thing. My other favorite character is Stokely. My only comment is that I wish there had been more conversation between Stokely and Hawke. The two interacted together more often in previous books. The communication between the two is pure genius. I always laugh so hard I end up in tears. Although both are equally amusing in this book, I wish they had more time together. Maybe in the next book, since this one is a cliffhanger@@ I really hate to have to wait til the next book to find out what happens.
Ted Bell has a wonderful imagination. I hope he keeps on with this series. James Bond has nothing on Alex Hawke. He has a personality that women will find irresistable, and men will envy. I do not want to give away the plot. You will not be disappointed. The perfect escape !

What did you love best about Warlord?

Lots of action as usual. The individual segments in the story line about the characters that we've come to know in this series.

Would you recommend Warlord to your friends? Why or why not?

If they like stories with action, yes I would.

Which character – as performed by John Shea – was your favorite?

I didn't experience any extremes as suggested. There were segments that would bring a smile, but no extremes except at the end!

There is a lot of technical explanations that to me are boring because I have no idea or knowledge of these type of matters. I appreciated the tidbits of historical data woven into the storyline. I think this makes the characters much more real.

The good: actually, a well-developed and reasonably innovative plot line, integrating IRA and Islamic terrorists. Good ins and outs the final third of the book.

The bad: mawkish or slavish devotion to the wondrousness of Alex Hawke and the moral virtue of the royal family. Lord Mountbatten in real life as a perv and cruel man in India is substituted in this book by prose extolling his virtue as Prince Charles' ever-wonderful godfather. We finally get to see the motives and rationale of his killer, but they are marginalized because the killer himself was such a murderous lunatic.

Not anything close to my favorite for this genre.

I enjoyed listening to this novel. It was pure escapism, not the best plot I've ever heard, but still one that kept me interested. I thought the narration was very good, the accents exceptional, especially "Hawk" and "Stoke".

Great book! Fast paced and action packed! Alex Hawke never dissapoints and neither does Ted Bell! I absolutely love the ending and set up for the next book, I'll be waiting anxiously for it! Back to Russia (Hint)!

Another fun adventure of Lord Hawke

I have been hooked on Lord Hawke since the first of the series. Sure, they can be a bit corny at times, and this is no exception. But my life had to be put on hold for 2 days while I listened to it. The narrator did a great job. Thoroughly enjoyed it. Can't wait for the next adventure, which was revealed in the last few minutes of the book.

Alex Hawkr at his best again

another strong performance in the Alex Hawke series this time our hero goes to multiple length to track down the villains from Pakistan and also a plot against the Queen and the Royal family.

How does he do it?! Another brilliant story!!

Alex Hawke and his band of brothers in arms has once again thrilled my heart! I cannot WAIT for the next installment of all the Hawke adventures 😍. Connie Carroll Stanzak