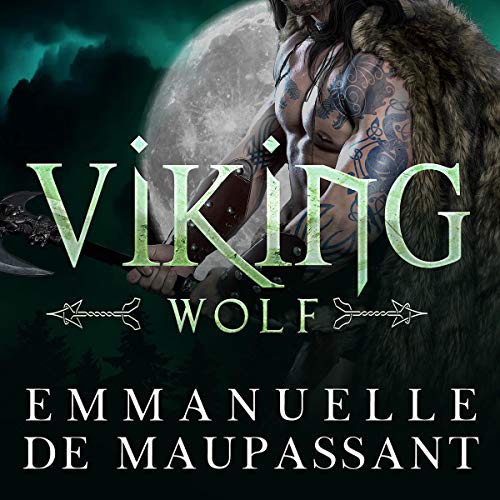 By: Emmanuelle de Maupassant
Narrated by: Emma Parry
Try for £0.00

Enter a world of burning desire and brutal passion, a world threatened by ambition, jealousy, and revenge.

Eirik has shed his blood on the battlefield; now, he’s commanded to marry a woman he’s never met. Will his sense of honor part him from Elswyth forever?

Caught between the desire of two Viking warrior brothers, does Elswyth have any choice but to submit? As the ancient blood rituals of Ostara night begin, dark forces are stirring, and Elswyth's life is in peril.

Surrender to suspense, mystery, and forbidden passion - in Viking Wolf.

Viking Wolf is the second in the Viking Warriors series: a full-length historical romance with some dark and steamy scenes.

What listeners say about Viking Wolf

Elswyth's Place with her new Kin

This audiobook was amazing. Elswyth and Arik's journey started off with lust and ended with love. Hella, Arik's sister, became Elswyth sister and defender and Faleen got her just dessert. Life, death, afterlife, and the Gods played a big part of this steamy folklore. The narrator, Emmd Parry was pleasant to listen to and she brought the story to life. Can't wait for the next book to see if Elswyth gets her true HEA

This is the second book of Viking Warriors called Wolf. This was another difficult listen, to hear what happens to the characters I had grown to love or hate. Eirik had taken Elswyth back to his village, where he falls in love with her. His brother is the Jarle of their community. So he sends Eirik and their sister to another village to find a wife for him and a husband for her. But the Jarle has his own agenda and we learn how evil he is. Emma Parry is the narrator of all three Books and reads them extremely well. She has a beautiful speaking voice and makes you believe everything is true. Looking forward to book 3.

Good but not for me

I enjoy this author and I really liked book 1 plus I know it was excellent writting but I personally just hate cheating stories. It's a hard no for me. There was plenty of steam and angst which all make for a great story but I just kept coming back to my feelings of the characters cheating. Otherwise I loved the author and narrator.
#AudiobookObsessionReviewer

I’m really liking this series so far! The setting and characters are so interesting that I can’t wait to hear more.

Wow I think I liked this one even more than the first one!!
It is written in such an amazing way that it some how seems to flow so gently even when dealing with harrowing, brutal situations that i almost felt hypnotised at times!!
The Narration definitely helped with the hypnotic feeling - it was done brilliantly!
Highly recommended

This book picks right up from the last one. It’s just as brutal and graphic. If your looking for a romance this is NOT for you! It’s edgy and gritty. Great narration.
#audiobookobsessionreviewer

For the love of vikings

I really enjoyed this dark tale with lots of heart breaking moment's and lots of sexy times. I can't wait to see what's next in store for the sexy Vikings. Really happy with the way the story is progressing for this series.

Now that Elswyth has accompanied Eirik to his homeland as a thrall, she clings to him in the hopes that he will not leave her to the other men of the village. Even though Faline is also with them, Elswyth believes Eirik truly loves only her. However, when Eirik and his sister leave to find their arranged marriages, Elswyth is left behind. Now, she must deal with Eirik's brother's lust, as he is the Jarl of the village. When a strange sickness invades, Elswyth attempts to find a cure, only to be cast out for her failure.

If you're looking for a brutally honest Viking romance, this is the book for you.

I had a hard time with this one. It left me confused here and there. It wasn’t horrible, but the way book one was set up, I thought this would be set up the same way. I wanted more of a continuation of book 1.

This is a viking story from the pov of Elswyth an English woman that follows on directly after the novella Viking Thunder.

I felt that the author drew a vivid picture of how life was in viking times, and evoked the feelings and atmosphere I would imagine of how people in that society would live, and love and function. The story itself is more than a love story, it really is a story of a young woman and her struggles within a male dominated village. I haven't really read or listened to many other stories about the vikings, but I definitely enjoyed this audiobook.

Viking Wolf is an earthy, primal, passionate tale full of Viking lore, pagan celebrations and drama. I loved Viking Thunder, probably the most erotic book I have ever read, and Viking Wolf continues the story of Erik and Elswyth as they land in Erik's Viking Village. The passion and lust between them has not abated, but the politics, traditions and jealousies in Erik's world threaten to overpower Elswyth as she tries to sort out what her role is and become accepted. Was she a slave to the ruling family or did her love for Erik have a future? Could she avoid the lecherous advances of Erik's brother the jarl (leader)? Must Erik wed a woman from another village to form a political alliance? This series feels so real and transports you to the often violent and brutal world of the Norse and their pagan rituals and beliefs. As a healer, Elswyth is mystified by a strange pox that is plaguing the villagers and if she is to be accepted she needs to find a cure. And she was living in dangerous times with one misstep could brand her a witch or an outsider forever. And there is plenty of raw, Viking sex in this book too to thrill you. Fortunately the third book, Viking Beast will be released soon!

This second episode leads the read to the Viking stronghold. Here we met Eirik's brother, the ruler of this band of warriors.
However, the chieftain brother's glances soon tell Elswyth that she is going to be in the middle of a terrible tug of war.
Circumstances cause Eirik and his sister to go in search of an alliance, via marriage with a nearby clan. It is whilst they are away that dramas arise.
This episode isn't as erotic in description as the first, but the narrator does an excellent job of portraying the various characters through different vocalizations. This also brings out the sinister aspects of certain situations.

Viking Wolf is unique and cleverly written book and picks right where Viking Thunder left off. It's a compelling and sensual story loaded with passion and drama. Emma Parry performance is outstanding. I love her ability to modify her tone and timbre, notably for the male characters.

This was a great continuation to book one with more of a story line... very interesting story line of things I would have never thought of and then researched to see how much was fiction and how much possibly did happen. And well well well the Vikings were an interesting bunch!!! #audiobookobsessionsreviewer

I listened to the first book and thought it was great. This was a great continuation of the story. Wow! Elswyth has gone through a lot! Can't wait to see what happens next! I volunteered to leave this review.

i enjoyed this book very much. Just when i thought i knew where this story was going, i was surprised that it took a new turn. I like that a book isnt easy to figured ever move out. i thought this a story that made you think about what you would have done. I found myself saying my thought out loud. this is part 2 of the series, and i think that they went together. i would say that you could read either of them as a single book, but its great when you read both books.

A bit darker than my usual reads, there’s a lot of drama and violence in these stories. But I really want to know how the story of Elswyth’s life continues. Will she find her happiness eventually?

I liked the narrator, Emma Parry.

I So Love These Stories of the Great Vikings !! Emmanuel de Maupassant had her own way with Words weaving These intertwining Stories to Life !!
Wonderful Characters !! You will not want to stop listening untill their finished !!

I've been reading erotica since I was of legal age to buy it. And thanks to audiobooks, I now can listen as well as read. Emmanuelle de Maupassant is one of my favorites for writing historicals that are volcanic. I'd already established a long time ago that this author knew exactly what buttons to push to make a book appeal to even the finest of connoisseurs of erotica. These Viking books of hers just bring it on home for me. This is the kind of book you blush when you read - not because you're embarrassed but because it is raising your body temp.

So, be brave, wear light clothing, keep your significant other handy cause these books are steaming! I highly recommend any of her Viking books, but you could start on this one and work your way up. :-)

Elswyth’s adventure continues in this story. As she begins to settle into her new life in this new world that she has found herself in hardship and chaos comes calling. What will happen to Elswyth and Eirik? Will love prevail or will duty be what is chosen?

This second installment in this series is a deeper and more in depth look at the characters in this world. We see everything through Elswyth’s eyes. She goes through a multitude of emotions as she goes through the trials in her new life. This part of the tale delves into the lives of the characters and where fate leads them. I enjoyed watching everything play out. There were a few parts to the story that either seemed rushed or slow but as a whole Elswyth’s story pulled me in and had me interested in what would become of her in this land. Narrator Emma Parry continues to keep the listener engaged through these tales. I found myself lost in the story as I listened.