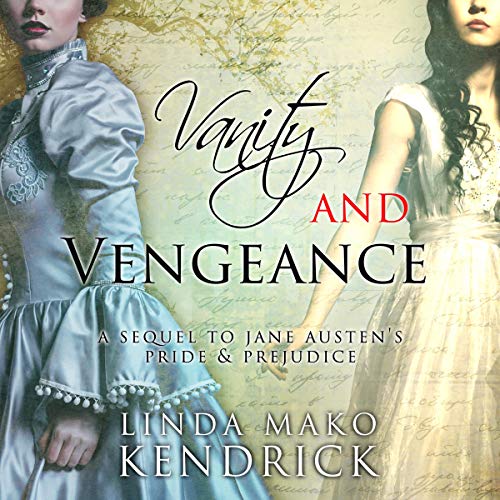 Vanity and Vengeance: A Sequel Inspired by Pride and Prejudice by Jane Austen

By: Linda Mako Kendrick
Narrated by: Penny Scott-Andrews
Try for £0.00

Vanity and Vengeance begins 10 years after Pride and Prejudice ended: Darcy and Elizabeth are happily married, but Georgiana (his beautiful and wealthy younger sister) does not seem interested in marriage; Lady Catherine’s daughter, Anne, has completely given up on her romantic hopes; and, Elizabeth’s sister Jane (happily married to Charles Bingley) has adopted an orphaned child. It is Georgiana’s interest in a poor and unpredictable young man, and the interest she arouses in a wealthy older man, that drives the story forward. Along the way, the Darcys encounter a vengeful Frenchman, family members both deceitful and loyal, and one very determined horse.

The story is told with a nod and a smile, extracting lines and situations from Pride and Prejudice and reimagining them in a slightly different context. Those who have never read or heard the original will not find themselves baffled, but those who have read or heard Pride and Prejudice will recognize the references and appreciate the additional layer of insider’s humor.

Why is Vanity and Vengeance worthy of your attention? That is such a hard question. All I can say is I liked the heroines; I despised the villain; and I couldn’t wait for Wickham to get the crap kicked out of him (well, that’s a modern description of what happened - the book channels Miss Austen and does not use that kind of language). Why did I write it? That is a much easier question to answer: My mother asked me to. (She wanted to know what happened to Darcy’s little sister, Georgiana.)

What listeners say about Vanity and Vengeance: A Sequel Inspired by Pride and Prejudice by Jane Austen

The narrator did great with what they were given.

I did listen to the sample and thought I could deal with this voice, but nope, total waist of $$. I just can't listen to this!

The characters were not true to their Jane Austen personalities. I understand that it was a variation, but they didn't have theree characteristics that I have grown to know and love. I gave it three stars because......

This is not true to jane

At all. It’s ridiculous actually. I think I actually read a review for it that it was true to canon or something of the sort.... it is NOT. It’s a stream of far fetched stories and far fetched characters- as long as you are ok with that- enjoy!

This book is the most excellent sequel to Pride and Prejudice that I have ever read! The narration was extremely well done! Every character's voice had a distinction which was consistently carried on throughout the entire story. The storyline was such that my interest was grasped and increased with each chapter. Full of intrigue, mystery, romance, and well described characters with backgrounds that had shaped their lives into who they were portrayed to be as the storyline unfolded. Very well done!!! Excellence Itself!